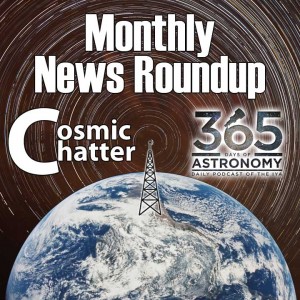 Description: Description: In this episode of the Monthly News Roundup, we land on one comet while early observations come in from another. A giant spot lurks on the surface of the Sun and tragedy strikes in spaceflight

You’re listening to the 365 Days of Astronomy Podcast for November 30th, 2014. I’m Morgan Rehnberg and this is the Monthly News Roundup. This episode was produced by Cosmic Chatter and recorded November 26th from Boulder, Colorado.

Our top story this month is the incredible cometary landing of ESA’s Philae spacecraft. After ten years journeying through the inner solar system aboard the Rosetta spacecraft, the tiny lander detached earlier this month and slowly drifted towards the surface of comet 67P/Churyumov–Gerasimenko. Almost immediately, however, things began to go wrong. A thruster designed to push Philae towards the comet’s surface failed to fire, leaving the ship to drift ever-so-slowly towards touchdown. When it finally reached its landing spot, the harpoons designed to secure it in place didn’t activate and it bounced off the surface not once, but twice, finally coming to rest hours later more than a kilometer away.

Images returned shortly thereafter revealed yet another setback. Philae appeared to have landed near the foot of a cliff, deep within shadow. Because the comet doesn’t rotate in the same was a planet like the Earth does, this darkness could last for months, far longer than Philae’s batteries could sustain it. Fearing the worst, mission controllers at ESA began a frenzied two-day program of exploration. In rapid succession, the lander carried out every planned measurement and observation, returning reams of data to Earth at breakneck pace.

Make no mistake: despite its difficulties, the landing of Philae was a smashing success. It was our first-ever visit to the mysterious world that inhabits the surface of a comet and, as scientists begin to explore the data returned, will reveal new insights into one of the most enigmatic denizens of the solar system.

To top it all off, this month might not mark the end for Philae. Next year, as the comet it rides circles the Sun, stronger sunlight may fall on its solar panels. With time, this light could recharge its batteries and offer our tiny lander another lease on life, halfway across the solar system.

From one comet, let’s turn to another. Perhaps you remember that back in October, comet C/2013 A1 Siding Spring made an unprecedentedly-close approach to the planet Mars. The event captured the focus of the planetary science community, and a host of telescopes on the ground, in Earth orbit, and at Mars turned to study this remarkable encounter. Now, a month later, we’re starting to get back some of the first results of this intense observing campaign and they are poised to open a window into phenomena not even studied here at the Earth.

Although Mars successfully dodged Siding Spring, it couldn’t avoid the comet’s tail, which stretched behind for hundreds of thousands of kilometers. When the Earth travels through the tail of a comet, from the ground we see a meteor shower. But, those comets themselves have long since moved on by the time we see their showers. Not so with Siding Spring. The close flyby of the comet itself dumped a tremendous amount of material directly into the Martian atmosphere. Never before have we gotten the chance to study such an event close up.

Data collected from three spacecraft, NASA’s MAVEN and Mars Reconnaissance Orbiter and ESA’s Mars Express, show the extent of the interaction between planet and comet. As an avalanche of dust rained down on the Red Planet, it burned up in Mars’ upper atmosphere. With a front-row view, the recently-arrived MAVEN was able to identify a host of metals within the falling dust: magnesium, sodium, iron, and more. As the dust burned, it injected a wave of electrons into the ionosphere, a layer of charged particles high above the planet.

Although this influx of dust and the shooting stars their vaporization produced would have made quite the show for anyone on the surface, scientists don’t yet know what the long term effect of the encounter on the Martian atmosphere will be. To better understand this, the fleet of spacecraft currently orbiting our sister world will continue to watch for changes in the coming months and years. And, with all this new information, perhaps we can be better prepared if a comet like Siding Spring ever buzzes the Earth.

Next up, let’s take a trip to the surface of the Sun, where November saw the largest sunspot in nearly a quarter century. The region, given the unsurprisingly boring name of AR 2192, spanned an area larger than the planet Jupiter, many times larger than the Earth.

So, what is a sunspot? It’s a question that has perplexed astronomers for thousands of years. Although Chinese astronomers first reported seeing these mysterious spots more than 2300 years ago, they would remain a complete enigma until 1612 when Galileo became the first to correctly identify them as cooler regions of the Sun. Since hotter things shine more brightly than cooler things, the cool areas appear as darker spots on the rest of the brilliantly-hot surface.

Why then, you might ask, are some areas of the Sun cooler than others? Unfortunately, the answer isn’t a straightforward one. The Sun generates a powerful magnetic field and, as hot material rises from the core to the surface, it can drag this field along with it. If the field is particularly strong in a region, it can be more difficult for new material to rise from within. Without this influx of new heat, the surface cools and a sunspot forms. Sound confusing? That’s because it is! To add even another level of complexity, the frequency and size of sunspots seems to vary as part of the solar cycle, an eleven year ebb and flow of activity on the Sun

Today, we aren’t restricted to simply studying spots on the Sun, we can look for them on other stars. Because they are darker than the surrounding surface, starspots reduce the overall brightness of a star a measurable amount. In fact, planet-hunting telescopes like Kepler need to account for this effect when searching for the tiny dips in light of a planet crossing in front of another star.

Want to see a sunspot for yourself? With a pair of solar eclipse glasses, large ones are easily visible to those with good vision. But, please, never look directly at the Sun with your naked eyes. No matter how dark a sunspot might appear, I promise it still brighter than anything you’ve ever seen.

Finally, we saw tragedy in space exploration since our last episode was recorded. In a matter of days, we were confronted with not one, but two reminders of the dangers posed when you push the boundaries. On the heels of a violent explosion that left an Orbital Sciences Cygnus capsule in ruins came the fatal breakup of the VSS Enterprise on a test flight over the Mojave Desert. With one pilot killed and the other injured, this was the first mishap in human spaceflight since the loss of Space Shuttle Columbia more than eleven years ago.

It’s a reminder that space is never easy, never routine. That’s a reason for caution and for care. It is not a reason to stop pushing those boundaries. In the aftermath of the loss of the Enterprise, some have suggested that it’s questionably-ethical for people to risk their lives simply so that the ultra-rich can take a joyride to space. I wholeheartedly reject this notion. All emerging technologies are expensive and therefore available first to the wealthy. Should we have never developed the car because early models were expensive and unreliable? What about the airplane? Far more people have died pushing the boundaries of flight than have lost their live in pursuit of space. Has their sacrifice made our world a better place? I think so and I hope for the same future in space travel.

We’ve always dreamed of being able to go to where we have yet to venture. Not just the few, but the many. Like Icarus, we will sometimes be burned. But, let’s put some ice on it, climb back up on our horse, and give it another try.

Thanks for listening to this episode of the Monthly News Roundup. For more astronomy news and commentary, visit http://cosmicchatter.org or follow @cosmic_chatter on Twitter. As always, you can contact us with your comments and corrections at cosmicchatter@gmail.com. See you in December!