Nov 29th: Ringside Seats To A Planetary Bake Off 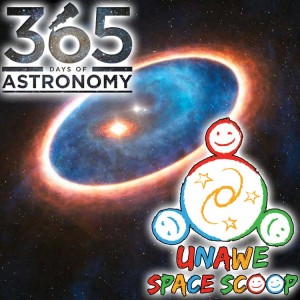 Title: Space Scoop: Ringside Seats To A Planetary Bake Off

Today’s sponsor: This episode of “365 Days of Astronomy” is sponsored by — no one. We still need sponsors for many days in 2013, so please consider sponsoring a day or two. Just click on the “Donate” button on the lower left side of this webpage, or contact us at signup@365daysofastronomy.org.

Transcript:
This is 365 Days of Astronomy. Today we bring you a new episode in our Space Scoop series. This show is produced in collaboration with Universe Awareness, a program that strives to inspire every child with our wonderful cosmos.

Today’s story is…
Ringside Seats To A Planetary Bake Off

We have no idea what alien life might be like, but many people believe it probably needs a planet like ours to live on; with mild temperatures and watery oceans. The first place we look for this type of planet is around stars like our Sun.

Half of all Sun-like stars, though, are born with a sibling star. When two stars are born together they circle around each other, creating what we call a binary system.

And since half of the Sun-like stars in the galaxy are located in binary systems, and even though a binary system is intrinsically different from our solar system, there are a large number of them and they should not be overlooked in the search for exoplanets.

During their exoplanet searches, astronomers have found lots of giant planets in binary systems. Most of these orbit around both stars. The only time planets have been found circling just one of the stars in a binary system is when the two stars are very far away from one another.

However, using the ALMA radiotelescope array, the ingredients for a new planet have just been spotted in a small cloud around one of the stars in the binary system GG Tau-A and a second, bigger ring-like cloud around both stars in the system.

The star would normally eat this inner cloud in 30,000 to 100,000 years, but this one has found a way to survive, improving its chances of one day forming a planet!

The small cloud’s method of survival is to constantly refill itself with material that’s kinda stolen from the bigger cloud. In the album art for today’s podcast you can see that the artist that created it has added a blue spiral of gas and dust swirling from the outer ring toward the inner one.

Though it looks realistic, it’s an artist’s conception, not a real astronomical image. The system does, however, look basically like this. ALMA detected clumps of gas between the 2 accretion disks which suggests that there’s material transiting between the 2 disks.

Since that ring is plainly still there, it has to be getting help from somewhere. Thus the clumps of gas between the two accretion disks is assumed to be traveling inward and not outward.

The inner accretion disk currently has enough material to make a Jupiter-sized planet. Jupiter is the largest planet in our Solar System, it’s over 300 times more massive than the Earth!

The outer accretion disk may have a progenitor for a super-Jupiter planet with over 10 Jupiter masses, but more observations are needed to be certain.

The GG Tau-A system’s other star is a binary star itself! Its companion is small and in a very close, tight orbit. Not much likelihood of planets there. So this is a triple star system!