Description: Space scoop, news for children. How many objects are there in our Solar System?

Bio: Avivah Yamani is a Project manager of 365 Days Of Astronomy

This is  365 Days of Astronomy. Today we bring you a new episode in our Space Scoop Series. This show is produced in collaboration with Universe Awareness, a program that strives to inspire every child with our wonderful cosmos. 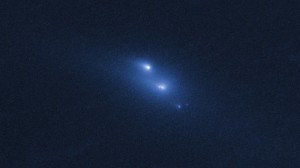 Fragments of an asteroid that was spotted shattering apart by the Hubble Space Telescope. Credit: NASA, ESA, D. Jewitt (UCLA)

How many objects are there in our Solar System?

There is one star (the Sun), eight planets (including Earth) and hundreds of moons. But many people forget about the most common objects in our cosmic neighbourhood – asteroids.

Asteroids are chunks of rock and metal left over from when our Solar System formed. Most can be found between Mars and Jupiter, a region of space we call the Asteroid Belt. The Asteroid Belt is home to hundreds of thousands of asteroids, ranging in size from tiny particles of cosmic dust to miniature planets. Some of these miniature or “dwarf” planets are just 13 times smaller than the Earth.

Recently, while peering into the Asteroid Belt, the Hubble Space Telescope caught sight of a very odd event: an asteroid spontaneously falling to pieces.

“This is a rock. Seeing it fall apart before our eyes is pretty amazing,” said David Jewitt, one of the scientists investigating these asteroids.

There are a number of explanations for this unexpected collapse, but astronomers think the true cause was the Sun. Over time, heat from sunlight caused the asteroid to spin faster and faster. This is similar to what happens when you boil the kettle, as the water is heated it begins moving around and bubbling, faster and faster.

Unfortunately, this asteroid was a bit fragile before it began “spinning out of control”. Too many bumps and scrapes with other members of the Asteroid Belt had caused cracks to appear in the rock. As it began to turn faster these cracks widened, eventually breaking the asteroid apart.

One day some of these pieces will burn-up in our atmosphere in a spectacular display of shooting stars!

The material that is left weighs in at 200,000 tonnes, which is the weight of two cruise ships! Most of this will eventually plunge into the Sun, but a small amount may one day blaze across our sky as shooting stars (meteors)!

365 Days of Astronomy is a community podcast made possible thanks to the contributions of people like you. Please consider donating at 365DaysofAstronomy.org/Donate