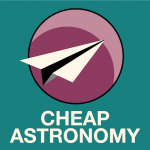 Description: Cheap Astronomy gives a detailed expose on one of the best known features of the southern hemisphere’s night sky.

Bio: Cheap Astronomy is an educational website that gives you more big bang for your buck. No ads, no profit, just good science.

Today’s sponsor: This episode of “365 Days of Astronomy” is sponsored by Clockwork.

Hi this is Steve Nerlich from Cheap Astronomy www.cheapastro.com and this is The Southern Cross.

It seems appropriate that a humble astronomy podcast from Australia should cover the quintessential constellation of the Southern Hemisphere in a 365 Days of Astronomy Podcast. So here goes.

The International Astronomical Union – also known as the people who killed off Pluto – have defined 88 modern constellations to completely map the northern and southern skies – and of these 88 – Crux, or what most people call the Southern Cross, is the smallest.

To southern sky gazers, it is the first clear grouping of stars to become visible after sunset – along with the closely associated Pointer stars – or Alpha and Beta Centauri – which are of course part of the larger adjacent Centaurus constellation.

Now this brings me to a key point about constellations. The apparent association of different stars in a constellation is generally pure coincidence.

Alpha Crucis, or just A-Crux, is the brightest star of the Cross with an apparent magnitude of 0.8. Remember this is the somewhat non-intuitive magnitude scale which establishes an averagely bright star as zero (which by the way used to be the star Vega, except now Vega’s magnitude has been recalculated at 0.03) –anything brighter than zero has a negative magnitude. Like I say… non-intuitive.

Anyway, in reality, A-Crux is 320 light years away (which is lot further than Vega) and it is actually a collection of stars including two huge B class stars orbiting each other at a distance of only 1 AU (the distance between the Sun and the Earth) – and both of these are big enough to go supernova later in their life – which should be a show and a half.

If you can picture in your mind, the Southern Cross as kite-shaped, then ACrux is the tail of the kite. Proceeding clockwise the next star is Beta Crucis, or B-Crux, which has an apparent magnitude of 1.3, which of course means is not as bright as Acrux, nor is it as bright as Vega for that matter. B-Crux is about 350 lights years distance and another B class binary system.

Next is Gamma Crucis, a single M class red giant and hence, not in itself, intrinsically bright. Its mild apparent magnitude, at 1.59, is largely due to it being only 88 light years away.

Delta Crucis – which doesn’t even make it into the top 30 brightest star list and has an apparent magnitude of 2.8, is another B class star at 360 light years away – but it’s near the end of its main sequence, not big enough to go supernova and is instead developing into a red giant, which is why it’s not all that bright.

And lastly, the very faint Epsilon Crucis with an almost pathetic apparent magnitude of, get this, 3.6, is an orange K class giant 385 light years away.

So there you go – a fairly typical constellation – meaning it’s an arbitrary collection of stars which have almost nothing to do with each other.

It may be of interest to the various light pollution awareness raisers of 365 day podcasts that this dimmest of the Crux stars, Epsilon Crucis, is now only barely visible in the light polluted night skies of Sydney and Melbourne – and is predicted to disappear from sight entirely in the next few years.

This is a bit of a concern since the Southern Cross is a common feature on a surprising number of countries’ flags – including Australia, New Zealand, Papua New Guinea, Samoa and Brazil – although New Zealand has avoided the whole issue by not including Epsilon Crucis in the first place.

As a bit of an aside, the Brazilian flag contains several constellations and individual stars – allegedly representing the sky over Rio de Janeiro on November 15, 1889 – the day the Republic of Brazil was declared. However, anyone familiar with the Southern Cross will note that it is back the front on the Brazilian flag – as indeed are all the constellations depicted.

Apparently, the intention of the design is to give a view of the sky as it would appear if viewed from ‘outside’ the celestial sphere – which raises an intriguing thought about whether you could actually find a point in space at hundreds of light years distance where all the potential parallax angles were inverted so that you could not only see the Southern Cross from behind, but also see the other constellations as they are depicted on the Brazilian flag. I’m sort of thinking it’s not possible – but if I’m wrong, please send emails.

In any case, the Southern Cross does have some practical uses. A line through Alpha and Gamma Crucis – which is the long axis of the kite shape, points towards the Southern Celestial Pole. If you draw another line perpendicular to the midpoint of the two Pointer Stars, this also points towards the pole – and the intersection of these two lines from the Cross and from the Pointers? Yep, that is the Southern Celestial Pole. Point at that spot in the sky and then drop your hand straight down to the horizon and you’ll pointing almost due South.

Historically, this has made the Southern Cross a handy year round navigation aid, since below latitudes of 34 degrees south of the equator – the Southern Cross is circumpolar – meaning that it never dips below the horizon, but just circles around and around the pole the whole year through.

In fact, this means that as well as being a directional aid, the Cross can act as a 24 hour clock. Allegedly, sheep and cattle drovers in remote areas of Australia used the rotating movement of the Southern Cross to determine the length of their night shifts – since a 45 degree rotation of the constellation around the Southern Celestial Pole takes just on six hours.

One last point, Crux was actually visible to the Ancient Greeks, around 1000 BC. However, the precession of the equinoxes gradually lowered it below the European horizon. By AD 400, most of the constellation was no longer visible above the horizon from Greece and today it is only visible up to a latitude of 25 degrees north of the equator, which excludes nearly all of Europe and of North America.

The precession of the equinoxes is a 26,000 year cycle – the result of a certain wobble in the Earth’s spin that means that the current site of the Southern Celestial Pole, not to mention the Northern Celestial Pole currently cited near Polaris, are just temporary arrangements.

Back when the ancient Greeks where enjoying their view of the Southern Cross, the Southern Celestial Pole was somewhere in the vicinity of the little known constellation Reticulum. In 10,000 years, when it’s estimated that people will be calling Vega the northern pole star, people maybe also be calling the star Pi Puppis a roughly approximate southern pole star. Until then though, the Southern Cross will be becoming even more southerly and in just three to four thousand years it will be invisible to anyone north of the equator as the Southern Celestial Pole makes it way across the Milky Way through the constellation of Carina.

Thanks for listening. This is Steve Nerlich from Cheap Astronomy, www.cheapastro.com. Cheap Astronomy offers an educational website where a stitch in time raises all sorts of cosmological complexities. No ads, no profit, just good science. Bye.