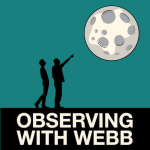 Title: Observing With Webb in October 2017

Description: We lose a couple planets in October, but Saturn and Venus continue to shine, with Mars getting brighter and higher in the morning. Morning seems to be the theme of the month, as we also get some nice close encounters involving Mars and Venus, an occultation of Regulus, and the Orionid Meteor shower, all happening before sunrise.

Welcome to Observing With Webb, where a high school astronomy teacher tells you what they’re looking at, why it’s so cool, and what you should check out later this month…at night.  Don’t forget to check out my Podbean page, YouTube Channel, and Twitter feed, or get my podcast feed on Stitcher, or iTunes.

Looking at my notes from last year for October, I was reminded that this was the month where all of you came together to vote for the Pequea Valley Planetarium to get a $100,000 Farmers Insurance Thank America’s Teachers Grant. It’s a year after voting, and things are progressing.  We’re at a standstill right now, but only because the room is gutted and ready to have everything installed while we wait for the new projection dome inside, which won’t be manufactured until February.  I’ll be posting a more detailed update on the Facebook page sometime soon, but we are moving forward.

We lose a couple planets in October, but Saturn and Venus continue to shine, with Mars getting brighter and higher in the morning. Morning seems to be the theme of the month, as we also get some nice close encounters involving Mars and Venus, an occultation of Regulus, and the Orionid Meteor shower, all happening before sunrise.

Planets you can see around Sunset – Saturn (SW)

Venus – This is the descent of Venus as a morning star this year.  Watch every day as Venus gets lower in the morning sky toward the East until it will be just visible in the dawn by the 31st.

Mars – Pretty dim, but it’s there in the eastern sky, passing Venus on the morning of the 5th, and getting higher each day, but still difficult to see, with being so dim and far away.

SATURN – Look SW after sunset and find the bright light above and between Scorpius and Sagittarius. It will set around 10pm in early October and 8:30pm in late October.

Jupiter – Not visible anymore as it is on the opposite side of the Sun for the month.

5th – Close Encounter – Venus, Mars – Look East after 5:44am, and you’ll easily find Venus. Look only ¼˙ down and to the right and you’ll find dim, red Mars.  Binoculars would certainly help.  Also, be sure to go out as early as possible, since the dawn will start drowning out Mars pretty quickly.

Last Quarter Moon – 12th (Visible from midnight into the morning)

15th – Morning Occultation of Regulus – The Moon will pass in front of Leo’s brightest star Regulus this morning.  Times vary, and can be found at http://lunar-occultations.com/iota/bstar/bstar.htm, but for Lancaster County, PA, the lit portion of the crescent Moon will cover up Regulus right around 5:40am.  Regulus will then reappear at right about 6:41am from the dark portion of the Moon.

16th – 18th – Close Encounter – Moon, Mars, Venus – These three days the Moon will visit and pass Mars and Venus. Each morning, get up after 6am and look for the Moon. On the 16th, the trio will make a nice line, with Mars in between Venus and the Moon, but a little closer to Venus than the Moon. The next morning, the Moon will be directly next to Mars, just about 1˚ to the left, making it easier to find Mars than the rest of the month.  On the 18th, it will be a challenge, but you can find a VERY thin crescent Moon 5˚ below Venus, with Mars 8˚ above Venus.

20th – 22nd – Orionid Meteor Shower – You’ll have to get up early in the morning for this one, as the meteors appear to radiate from the radiant, which is in the club of Orion.  I usually don’t say much about this one, since it usually produces only 10-15 meteors per hour, but the Moon will be non-visible, therefore you’ll get really good skies.

Just after Sunset (around 7:30pm) – Lyra the Harp, Cygnus the Swan

Extra Challenge! Use binoculars (or even a telescope) and a star chart to scan through the southern constellation of Sagittarius.  There are at least 7 easily visible clusters and nebulas up and to the right of the “teapot” of Sagittarius.

Between Sunset and Midnight – Lyra, Cygnus, Aquila (a little to the south) – These are the Summer constellations, and since they are visible right above us around midnight (and to the east after sunrise), it’s now summer!  More details below in the “General Constellation Finding Tips”

Midnight – Lacerta, Pegasus, Andromeda – Extra Challenge!  Using your naked eye (dark-adapted and in a dark area) or binoculars under normal conditions and a star chart, try finding our neighboring Andromeda Galaxy.  It’ll be a faint fuzzy in the constellation Andromeda.

Early Morning – Perseus, Auriga –  Also, if you look to the SE in the morning, you’ll find the winter constellations of Orion, Taurus, Auriga, Gemini, and Canis Major.

Look straight up before 10pm and you’ll be able to see Lyra (the Harp), Cygnus (the Swan), Aquila (the Eagle), (and Delphinus the Dolphin.)  These three constellations have the three brightest stars of the summer constellations (Vega, Deneb, Altair – respectively.)  Those bright stars create the summer triangle.  Off to the east of this is the small but beautiful constellation of Delphinus. If you’re under dark skies (away from city lights) you may just catch a glimpse of the Milky Way passing through Cygnus and Aquila.  If you’re looking past 10pm, they’ll be moving toward the West and lower in the sky.

If you can find the Summer Triangle and Delphinus, about 40˚ to the East (leftish) will be the Great Square of the fall constellation Pegasus.  Perhaps you’ll even see the two curves of Andromeda off of one side, with the Andromeda Galaxy as a small, faint fuzzy nearby (you’ll need dark skies to see it).  A sky map will help you tremendously in finding these.  You’ll see these in the East after sunset, straight above you around midnight, and in the West in the morning.