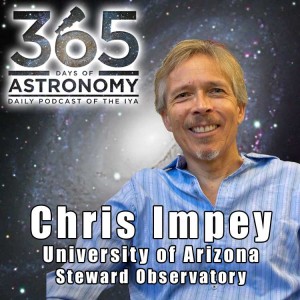 Title: Moon, Mars, and Beyond

Description: This week Professor Chris Impey, from the University of Arizona and author of the book: Beyond: Our Future in Space, presents his first in a series of five podcasts on human space exploration, beginning with the recent growth in private sector space launches and looking to the future of human spaceflight.

After a long childhood on Earth, we may be ready to leave home.

The space program has advanced with stutter steps and uneven progress. It got an early boost from the superpower rivalry between the United States and the former Soviet Union, but it reached a plateau as the difficulty and cost of space travel sunk in. More recently, a dynamic private sector has taken up the reins of innovation. Horizons are opening up again.

We explore space because it’s in our genes. Scientists have identified a variant of a gene called DRD4 which helps control dopamine. This gene is associated with curiosity, restlessness, and risk-taking behavior. And while human behavior can’t be reduced to a single gene, the presence of DRD4 correlates with the distance our human ancestors were willing to navigate as they explored the planet. Large scale exploration is unique to humans. Animals migrate to follow food sources but we’re the only species to jump borders, leave our comfort zone, and set out across the open sea.

There will always be problems demanding our attention here on Earth, but that will not deter visionaries and technologists from pushing the envelope of space travel. Living and working in close confines off-Earth will leach us about ourselves. It might also teach us how to use the resources of Earth more efficiently.

If we do leave, where would we go?

Just as a baby bird makes forays to the nearest trees before exploring a larger terrain, so we will venture to the nearest rocks in space before we contemplate leaving the Solar System. Earth orbit is not a destination; it’s very close to the ground, the equivalent of a half day’s drive straight up. It serves as a staging point for further travel and as a place to learn about the effects on humans of microgravity. In 2004, a presidential commission presented a blueprint for space exploration in the report called “Moon, Mars, and Beyond.”

It might seem like a backward step to go to the Moon. It’s a lifeless rock, pitted with craters and subject to a torrent of high energy radiation from the Sun. Most Americans weren’t alive when we last landed on the Moon and the thrill of the Apollo landings has become a dim cultural memory. But we know how to get there, the travel time is only a week, and the Moon is not as dry and inert as we once thought. NASA has scalable technologies that can mine the lunar soil for water (about one liter in every cubic meter) and oxygen (for breathing and making rocket fuel). Solar energy can be used to melt soil into “slump blocks” and built a habitat that will protect the colonists from cosmic rays and micrometeorites.

The real killer app for the Moon is a space elevator. The idea was proposed for getting objects into Earth orbit by Russian space visionary Konstantin Tsiokovsky in 1895.  A cable is tethered to the surface and extends far into space, held aloft by a counterweight and centrifugal force of the spinning planet. Elevator cars climb up and down the cable, removing all need for expensive and inefficient rockets. Space elevators are a huge technical challenge; when Arthur C. Clarke was asked when they would be feasible, he said “fifty years after everyone stops laughing.”

That’s true for the Earth but the Moon’s much weaker gravity puts a space elevator within reach now. The cable would have to be made of high tensile strength material like Kevlar, or something called M5 fiber. Even if the cost is ten billion dollars or more, a space elevator can fuel an economic activity much larger. Any place in the Solar System can be reached from lunar orbit for modest energy costs.

Mars is the most hospitable planet beyond the Earth. NASA is methodical in its approach and the agency doesn’t even plan to send astronauts to visit Mars for twenty years. The Dutch non-profit Mars One has plans to land colonists there by 2026 and they’ve already culled thousands of applicants down to a few hundred for the one-way trip. But most space experts don’t think Mars One has the technical or financial means to achieve their goal. A better bet may be SpaceX. The company has a good track record of rocket innovation and CEO Elon Musk will announce details of a Mars transport system later this year.

Space exploration is a recent phenomenon. Homo sapiens emerged in Africa 200,000 years ago and started roaming the planet 150,000 years later. The first civilizations date back 10,000 years, and we’ve only had industrial technology for 200 years. The space program is in its infancy, barely half a century old

If we do establish a permanent settlement on the Moon or Mars, it will be a transition as profound as when we left Africa for the first time. The colonists will be a young offshoot of the human tree, with the potential to evolve into a different species. Having left home, they might one day set their sights far beyond, to the stars.