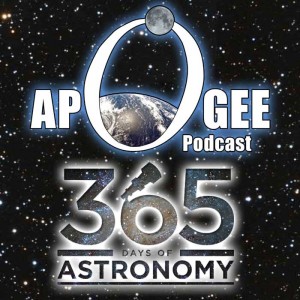 Description:  In this Apogee Podcast, Cosmic gives a brief update on the EvryScope project, and then proceeds to discuss how properly calibrated data  is essential when trying to detect Earth-like exoplanets.

Bio: Cosmic is a self- and crowd-funded independent research astronomer and space musician.

Hello!  This is Cosmic, and welcome to the Apogee podcast!  The format of this podcast is myself describing, discussing, and critiquing an article of my choice from an astronomical journal.  Sometimes I expand on sub-topics discussed in the article, especially if I find them interesting or in need of a more detailed explaination.  These podcasts will take place at or near the date of the apogee which is when, along its orbit around the Earth, the Moon is furthest away.

If you have any articles to suggest for future podcasts, I would be happy to take a look at them.  I can be reached at cosmiclettuce AT gmail DOT com.

The music you hear in the background are my own compositions.  These and many others can be downloaded from my soundcloud channel ‘cosmiclettuce’.  I hope you enjoy listening to space music as much as I do.

Jupiter is at opposition tomorrow, 6 February 2015 at about 18 hours UTC.  This means that the Earth is directly between Jupiter and the Sun.  This also means that Jupiter is as close to Earth as it’s going to get (some 650 million miles away) until next opposition on 8 March 2016.  It also means that Jupiter is as bright as it will get this year, and it’ll be visible in the sky all night long.  Jupiter is also near its equinox (happening about every six years) which means that this is the season for satellite mutual events.  This is when one moon eclipses or occults another moon from Earth’s point of view.  Timings of these events by Danish astronomer Ole Rømer in the 17th century allowed him to fairly accurately measure the speed of light.  I can say from first-hand experience that watching a moon wink out only to wink back in a few minutes later provides a great example of how incredibly complex and dynamic our universe is.  Precise photometric measurements of such events can tell us many things about the individual moons and the environment of the Jupiter system. So if it’s clear out tonight where you are, go out and give Jupiter a wave! But before you do, find out what’s going on at Jupiter by listening to my daily podcast ‘Jupiter Today’.

Ok, on with the paper!

This apogee, before I discuss the main topic of Earth-like Exoplanet Spectra, I’m going to give a brief update on the EvryScope project.  I discussed this fascinating and exciting project in more detail in the Apogee Podcast on 29 July 2014.  Since then, there have been some small changes to the design, but overall it looks like everything is on schedule.  This new paper goes into much more detail than what I’m able to give in this podcast, so I encourage you to take a look at it for yourself.  I’ve included a link to the paper in the podcast notes.  The EvryScope is a sky survey system comprised of 27 telescopes, 61mm in diameter, all on a single mount.  See Figure 1 for a picture of what the EvryScope will look like, and Table 2 for the system details.  An image of the sky will be taken every two minutes covering 8,660 square degress down to magnitude 16.4.  19th magnitude objects will be detected with a 1-hour exposure (30 images added together).  Simulations and performance metrics are currently underway as construction of the EvryScope continues at UNC Chapel Hill.  Plans are still to have this system installed at the Cerro Telolo Inter-American Observatory this year, 2015.  The paper describes the what the science objectives of EvryScope are.  A very impressive list, indeed! For example, they expect to have a 50 percent chance of finding at least three transiting exoplanets with an orbital period of 20 days or less after a one year survey.  They also expect to be able to provide data for doing stellar astrophysics, as well as being able to monitor the sky for transient events like supernovae and gamma-ray bursts.  They’ll also be able to detect unexpected events which to me are the most exciting.  With 100 terabytes of compressed data being produced every year, this will literally be a gold-mine. Tools to find the nuggets are in development.  I look forward to watching this project progress towards first light and nightly operations.  Still no word on how, if at all, access to this data will be provided to those of us not directly involved in the project.

Ok, now on to Exoplanets.

While more and more exoplanets are being discovered seemingly every day, some of that focus has now turned to developing instruments and methods of discovering Earth-like exoplanets.  This requires a method of astronomical observation and measurement called spectroscopy.  Spectroscopes are astronomical instruments that spread the light from stars (or anything else for that matter) into a rainbow of colors called a spectrum.  Fine structures within a spectrum allow astronomers to determine, among many other things, the chemical composition and temperature of the object being measured — two things we need to know in order to determine whether the exoplanet is Earth-like or not.  Just knowing it’s orbital parameters isn’t enough to confirm this. Currently, we don’t have the technology to directly take the spectrum of an exoplanet.  The best we can do at the moment is take a spectrum of the host star while an exoplanet is transiting it and compare that to a spectrum when the exoplanet isn’t transiting.  The difference between the two should be the spectrum of the exoplanet, right?  Well, according to the authors of this paper, it’s not quite that easy — as we shall see.  Moreover, once a spectrum is obtained, what tells us that it’s Earth-like?  What’s needed is a comparison spectrum, and the ideal object for that is the Earth itself.

In a recent paper entitled “The centre-to-limb variations of solar Fraunhofer lines imprinted upon lunar eclipse spectra: Implications for exoplanet transit observations”, an international team of astronomers describe a clever method of obtaining a spectrum of the Earth while it’s transiting a star — The Sun! Unforunately, we have no spacecraft that are in an orbital position to take this spectrum for us, but there is another “spacecraft” orbiting the Earth that can help — The Moon!  During a lunar eclipse, the Earth is indeed transiting (or occulting) the Sun as seen from the Moon.  The shadow of the Earth on the moon has two primary components: the Umbra and the Penumbra.  The Umbra is the dark part of the shadow where the Earth is completely blocking light from the Sun.  The lighter and more diffuse Penumbra, located around the perimeter of the umbra, is caused by sunlight passing through, and being absorbed and scattered by, the atmosphere of the Earth.  The spectrum of the penumbra during a lunar eclipse will be a combination of the spectrum of the Sun and the spectrum of the atmosphere of the Earth (reflected off of the surface of the Moon, of course). The authors of this paper have determined that features in the spectrum of the Sun (some of which are the “Fraunhofer lines”) change in subtle but significant ways depending on what part of the Sun is illuminating the atmosphere of the Earth.

The authors were able to observe and confirm this phenomenon during a lunar eclipse on 15 April 2014.  This and previous lunar eclipses observed by other astronomers have allowed the authors of this paper to conclude that taking into account these “centre-to-limb variations” (CLVs) is necessary if Earth-like exoplanet detection is ever to be accomplished.

The same situation is happening with transiting exoplanets.  As the exoplanet moves across the face of the host star, light from the star is absorbed and scattered by the atmosphere of the exoplanet.  While we’re unable to see this for ourselves, the fact that the exoplanet is transiting means that different portions of the host star are being transited by the planet.  So as the transit takes place, the authors argue that the resulting spectrum will change depending on the geometry of the transit.  A transit that takes the planet directly across the center of the star will have a different spectrum than a transit moving across the limb.  If we know the orbital elements of the exoplanet precisely enough, we can know what portion of the star is being transited.  Knowing various physical parameters of the star (mass, spectral type, luminosity, distance, etc.) allows us to make a decent guess of the CLVs of the spectrum of the star.  With all of this in hand, a proper subtraction can take place which will indeed leave us with just the spectrum of the exoplanet.

Taking into account the CLVs will also be needed for exoplanets that have different atmospheres than Earth or no atmosphere at all.  A precise and well-calibrated measurement of spectral features of an exoplanet can tell us not only its atomic and molecular composition, but also how much of those elements and molecules there are, its temperature, rotational velocity, etc. Using this transit method and because we can only guess that these planets are very dynamic, we might even be able to get a sense of the weather on this exoplanet as it transits its host star.  That is very very cool.

The authors also mention the fact that CLVs are different for different types of stars.  So the changing spectral effects caused by CLVs during the exoplanet transit can serve as a means to better understand the host star itself.

This paper is a great example of sound scientific methodology.  I encourage you all to give it a read.

And until next apogee … I bid you Peace.