May 27th: Encore: A Guide to the Stars and Planets 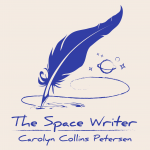 Title: Encore: A Guide to the Stars and Planets

Description: TheSpacewriter reviews one of her favorite astronomy books – A Field Guide to the Stars and Planets, by Jay M. Pasachoff.

Bio: Carolyn Collins Petersen is a science writer and show producer for Loch Ness Productions, a company that creates astronomy documentaries and other materials. She works with planetariums, science centers, and observatories on products that explain astronomy and space science to the public. She is currently working on an exhibit project for the NASA Jet Propulsion Laboratory. She wrote the Griffith Observatory astronomy exhibits in Los Angeles and the California’s Altered State climate change exhibits for San Francisco’s California Academy of Sciences. She has co-authored several astronomy books, written many astronomy articles, and is writing a new documentary show for fulldome theaters, a vodcast series for MIT’s Haystack Observatory, and a podcast series for the Astronomical Society of the Pacific.

Today’s Sponsor: “This episode of 365 days of Astronomy” is sponsored by iTelescope.net – Expanding your horizons in astronomy today. The premier on-demand telescope network, at dark sky sites in Spain, New Mexico and Siding Spring, Australia.

Hi. This is Carolyn Collins Petersen — TheSpacewriter. As a science writer, I’m an avid collector of astronomy and science books. Back when I first began authoring scripts and articles about astronomy, I started collecting useful books. One was A Field Guide to the Stars and Planets, by Dr. Donald Menzel It was a first edition, and remains one of the stalwarts of my collection.

Over the years, newer editions have come out, written by my friend and colleague, Dr. Jay Pasachoff. He’s a professor of astronomy at Williams College in Williamstown, Massachusetts and director of the Hopkins Observatory.

I just recently got the latest edition of The Field Guide to the Stars and Planets, and I’d like to share an audio walk through its pages with you.

The book begins where we all begin – under a starry night sky, gazing up and aching to understand just what it is we’re seeing.

We first notice bright things – are they stars? Planets? What phase is the Moon in? Are there any comets out there? Can we see asteroids?

To answer the many questions that come to mind, the book talks about what you might see, starting with how to orient yourself for the best viewing. It acquaints you with the coordinate systems astronomers use to locate things in the sky, and defines the language of astronomy.

Like drivers on unfamiliar highways, stargazers have to know where they’re going. So, as we move along the celestial byways, we need star charts and maps. This book has plenty of them. The full-sky maps are enough to get you started – to answer the main question: what’s up tonight?

Once you get your bearings, you are treated to a fantastic set of monthly sky maps, along with detailed instructions on how to use them.

So the first half of the book is the “getting acquainted” part. This is where you learn about the different kinds of visible objects: planets, stars, star clusters, galaxies, and galaxy clusters, that can be observed. This is priceless information you’ll need as you browse the atlas charts that make up over half the book.

After you get familiar with the idea of star charts and star maps, Jay takes you on a more detailed tour of the sky to familiarize you with more of what’s out there to observe.

When writing star shows for planetarium use, I often thumb through the Field Guide to locate such things as planetary nebulae and starbirth clouds. The chart descriptions are invaluable. They tell me what to look for, what objects looked like through small telescopes or binoculars, and sometimes an interesting story about observing the objects. Here’s a typical entry for the chart showing the Large Magellanic Cloud (LMC for short):

After the atlases comes discussions of the Moon, the planets, asteroids, comets, meteor showers, solar observing (with particular attention to solar eclipses), and chapters on celestial coordinate systems, telescopes and binoculars.

There are gorgeous images throughout the book, and, as with any good astronomy project, tables of useful information, an extensive bibliography and many references.

Well, that’s a really quick walk through what is quite an extensive and useful book. Now, you’d think that a publication filled with information like this would be the size of a big-city phone directory. Amazingly enough, this 578-plus paperback book measures seven by 4.8 inches – compact enough to carry with you in the field.

I always keep an up-to-date version of Jay Pasachoff’s Field Guide to the Stars and Planets handy on my reference shelf. It’s more than a guide to the stars and planets – it’s an introduction to the universe in the guise of an observer’s guide.

If you’d like more information about this book and its author, point your browser to www.thespacewriter.com/wp and click on the 365 Days of Astronomy tab. Thanks for listening!