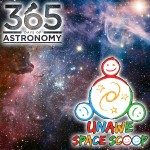 Transcript:
This is 365 Days of Astronomy. Today we bring you a new episode in our Space Scoop series. This show is produced in collaboration with Universe Awareness, a program that strives to inspire every child with our wonderful cosmos.

The Universe began with the Big Bang about 13.8 billion years ago. The entire Universe was composed only of energy and no matter and was inside a tiny bubble, so-to-speak, smaller than a proton. Then suddenly…the Universe that we know burst forth, both the energy and spacetime pouring out.

In less than a second, the Universe grew from smaller than the diameter of a hair, to bigger than a galaxy. This is the inflation period that cosmologists talk about.

And it kept on growing, though at a slower rate, once inflation had ended. In fact, the Universe is still expanding today, growing larger and larger all the time.

In 1929, astronomer Edwin Hubble noticed that galaxies far away from us appear much redder than normal. We call this effect ‘redshift’. Their light looks red because they are speeding away from us. And the ones that are farthest away are moving the fastest! This redshift is central to today’s story.

This is the key piece of evidence that the Big Bang happened. So in a way this finding was a microcosm of the Big Bang, with all of modern cosmology spilling out of it!

In 1917, 12 years before Dr. Hubble discovered cosmic expansion, and long before rock & roll was invented, the world’s first “rock star” scientist, Albert Einstein, had a bit of a problem on his hands.

His 1915 Theory of General Relativity indicated that the cosmos must be expanding or contracting. This so bothered Einstein that he inserted a fudge factor, a modifier called the cosmological constant to the theory’s equations in order to have the universe be static and unchanging.

When Einstein heard about Hubble’s redshift discovery he realized immediately that General Relativity’s expanding universe was really happening and that his Cosmological Constant was unnecessary. When he was older he told astronomer George Gamow that it was “the biggest blunder of my life.”

As for Hubble, well, he wasn’t so sure. Right up to the end of his life he kept open the possibility that no actual expansion existed, and that the redshift “represents a hitherto unrecognized principle of nature.” Sorry, mate, it’s real enough!

Now, you might well be asking about the title of today’s podcast, and when I’m going to talk about “Hubble Breaks The Cosmic Distance Record”… Well I’ve been burying the lede! What? Google it! It’s a great phrase! So here goes!

Using the same spectroscopic technique as Dr. Hubble and using the space telescope that’s named after him, astronomers have just shattered the cosmic distance record by measuring the distance to the most remote galaxy ever seen in the Universe!

The new galaxy, called GN-z11, is a whopping 13 billion light years away, 150 million light years farther than the previous record holder! The light we’re seeing from this galaxy has been traveling across space towards us since the Universe was just 400 million years old — that’s not long after the very first stars began to form.

Hey, Here’s A Cool Fact:
This remote galaxy is tiny compared to our galaxy. The Milky Way is 25 times larger in size and has 100 times the mass in stars. But GN-z11 is small and mighty; 20 times more stars are being born there, than in the Milky Way! It’s got a lot of growing to do!

Thank you for listening to 365 Days of Astronomy!
End of podcast: