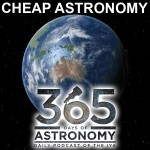 Description: A brief history of manned spaceflight from Vostok 1 to Apollo 11.

Bio: Cheap Astronomy is an educational website helping beginners develop an interest in astronomy without remortgaging their house. No ads, no profit, just good science.

Today’s Sponsor: This episode of “365 Days of Astronomy” has been sponsored by Mark Tillotson for the Astronomy Compendium.  http://astronomycompendium.wikispaces.com

Hi, I’m Steve Nerlich from Cheap Astronomy, www.cheapastro.com and this is Space Race: A brief history of manned spaceflight from Vostok 1 to Apollo 11.

As a bit of preamble, I want to tell you that the space age really began on the 4th of October 1957 with the launch of Sputnik 1. Shortly thereafter in November 1957, Laika the dog became the first astronaut in orbit. Unfortunately she didn’t make it back due to a malfunction in flight.

Now, I think it’s likely the 365 Days of Astronomy Podcast will be preserved for all time as a precious relic of 2009, the International Year of Astronomy. So here’s a message to the future of humanity – when you work out time travel and a cloaking device, go back and get her out of there. Then give her some water and a pat and take her for a walk. Hey, it’s Laika.

Anyway, after that, things went better- with Sputnik 5 in August 1960, the Russians sent up two dogs, Belka and Strelka, along with a rabbit, 42 mice and 2 rats. All passengers survived. Premier Khrushchev presented one of Strelka’s pups to John F Kennedy’s young daughter Caroline as a bit of a diplomatic jibe. The American’s had been struggling to get anyone in orbit and their most famous non-human astronaut was Ham the Chimp who went up and back in a sub-orbital flight in January 1961.

But, things really kicked off on the 12th April 1961 when Yuri Gagarin launched in Vostok 1 and did a single orbit in a flight lasting 108 minutes. Three weeks later, the Americans launched Alan Shepherd in a sub-orbital flight on 5 May 1961. Now Alan Shepherd was one of seven Mercury mission astronauts and it’s worth pausing to note that the names of five of those seven are immortalized as the sons of Jeff Tracy – Scott, Virgil, John, Gordon and Alan, the pilots of the Thunderbirds.

After Alan Shepherd, the Americans send up Virgil (or Gus) Grissom for another brief sub-orbital while the Russians sent up Gherman Titov for a whole day in space doing 17 orbits.

Finally in February 1962, the Americans get John Glenn into orbit – he does 3 orbits in just under 5 hours. Scott Carpenter does a similar flight May 1962, then the Russians up the ante again doing the first multiple space flight with Vostok 3 and 4 in flight at the same time, coming within 5 miles of each other.

Wally Schirra, the only flown American Mercury astronaut not have a Thunderbirds puppet named after him, did 6 orbits in October 1962 followed by Gordon Cooper in May 1963 who managed 34 hours in space – though quickly upstaged by Valery Bykovsky in Vostok 5 who sets a record of 5 days in space. And if that wasn’t enough, Vostok 6 is launched in June 1963 with Valentina Tereshkova, the first woman in space. The Americans don’t equal that feat for another 20 years when Sally Ride goes up in the Space Shuttle Challenger in June 1983.

Anyway, that was it for the Vostok and the Mercury missions. Incidentally, the seventh Mercury astronaut Deke Slayton never flew a Mercury mission due to concerns about a heart condition – but there’s an interesting footnote about him I’ll come to later.

As we move into 1964, the Russians then commenced their brief Voskhod program. Strangely, the first crew of Voskhod 1 was dumped 3 days before the launch after it was discovered that Boris Volynov‘s mother was Jewish. The substitute crew of 3 become the first crew in space in October 1964. Then Voskhod 2, having only 2 crew, but wearing space suits, takes off in March 1965 and Alexei Leonov becomes the first person to spacewalk for 12 minutes outside the craft. And that’s it for the Voskhod program. Voskhod 3, with Boris Volynov back in line to fly, is cancelled 10 days before launch following the death of Sergey Korolyov, the Russian’s Chief Designer who has been behind much of the Russian’s success in space to this time.

The Russians come to a standstill, giving the Americans their chance. In March 1965, the Americans commence the Gemini program, starting with Gemini 3 up to Gemini 12 all with 2 crew members, nearly all of whom go onto become Apollo astronauts apart from Gordon Cooper. On Gemini 3 Ed White does the American’s first space walk, followed by Gene Cernan on Gemini 9, Michael Collins on Gemini 10, Dick Gordon on 11 and Buzz Aldrin on 12.

Neil Armstrong and Dave Scott, subsequent commanders of Apollo 11 and 15, conduct the first hard docking in space between Gemini 8 and an Agena rocket that was launched into orbit a few days earlier. Things go badly shortly after when one of Gemini 8’s thrusters is stuck open sending the capsule into an uncontrolled spin, but Armstrong manages to engage the Gemini’s re-entry system – aborting the rest of the mission but saving their lives. The program ends with Gemini 12, piloted by Jim Lovell, in November 1966.

From here we enter the era of the Apollo and the Soyuz missions, but both commence with disaster. Gus Grissom, Ed White and rookie Roger Chaffee all die on the launch pad in an early test of the Apollo 1 spacecraft on the 27th of January 1967. On the 23rd of April 1967, the Russians launch their new Soyuz 1, something goes wrong with the guidance systems and Vladamir Komarov becomes the first person to die during a mission in space.

But, after some major rebuilding the American’s are first to get back up with Apollo 7, launched on the 11th of October 1968 after a series of unmanned Apollo flights. Only days behind, the Russians launch Soyuz 3 on the 26th of October 1968. Both flights are successful and the Russians do their first hard dock with the unmanned Soyuz 2.

Then the American’s play their trump card and send Apollo 8 to the Moon. Frank Borman, Jim Lovell and Bill Anders do 10 orbits on Christmas Eve 1968 and then head on home without a hitch. Wow. The Russian’s send up Soyuz 4 and 5, both manned and they both dock in January 1969. One of the Vostok 5’s crew, Boris Volynov finally gets his shot into Earth orbit and is remembered as the first ever Jewish astronaut, but whatever…everyone can see what’s coming.

Apollo 11 launches on July 16 1969. The mission draws on everything that been learnt in all previous missions. On entering lunar orbit, Neil Armstrong and Buzz Aldrin move from Columbia through a connecting tunnel to the lunar module known as the Eagle. They detach, leaving Michael Collins to wait in orbit in Columbia. Within the lunar module they engage the descent engine, already fully tested in the Apollo 9 and 10 missions and commence a landing. The only new thing in this mission is avoiding some rocks before touchdown.

And on July 20 (or the 21st if, like me, you were in Australia), Neil and Buzz do a 2 hour moon walk – then join back up with Michael Collins  and the three of them head home.

Once back at Earth, they commence aero-braking which has been standard procedure since Vostok 1, to slow their spacecraft down until parachutes can be deployed for a final landing. Manned spaceflight is astounding, amazing and totally plausible. Moon hoaxers, get a life.

One footnote, you may recall Deke Slayton who I mentioned was the seventh Mercury astronaut – grounded due to a heart condition. Deke served as NASA’s Director of Flight Crew Operations from November 1963 until March 1972, when he was granted medical clearance to fly – at which time he was 51 years old and became the eldest astronaut in space at that time. The mission was the Apollo-Soyuz Project , the first international handshake in space, between the Americans and the Russians, conducted in July 1975.