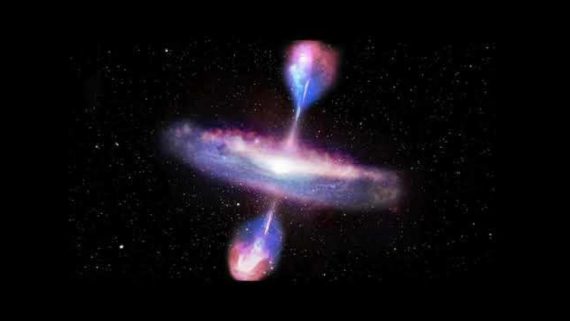 Our first story of the day has firmly planted a 1980s pop tune into my head, and in refuses to come out.

In general, quasars are extremely bright objects that have at their heart an actively feeding black hole. The color they appear to us is influenced by not only the actual colors of light they are giving off, but also by the way intervening gas and dust scatters their light. This material exists in our own galaxy, in the space between galaxies, and most importantly, in the dusks of the galaxies with quasars. In general, gas and dust scatter short wavelengths like blue light, and let longer wavelengths pass through. Because we know there is gas and dust out there, we blindly assumed that, all other things being equal, when we see a blue quasar, we’re seeing it as it is, but when we see a red quasar, we’re seeing only the light that intervening gas and dust lets us see. In particular, it was assumed these flattened galaxies were aligned so the gas and dust in the galactic disks was blocking our view into the central black hole.

The thing is, assumptions aren’t the same as data, and all things rarely are equal.

New research from Durham University, looks at the light of 10,000 quasars and tried to understand what colors are real, and what are dusty alterations or something else entirely.

What they found is the red vs blue quasar colors might not be strictly a matter of geometry. Rather, early on, these systems may undergo a wild epoch of star formation that ends up clearing the gas and dust out of the core of a galaxy to reveal it’s blue quasar, but it starts out as red when it first turns on and is cocooned in material. This makes, at least in some cases, the color switch an evolutionary effect rather than a difference in viewing angle. 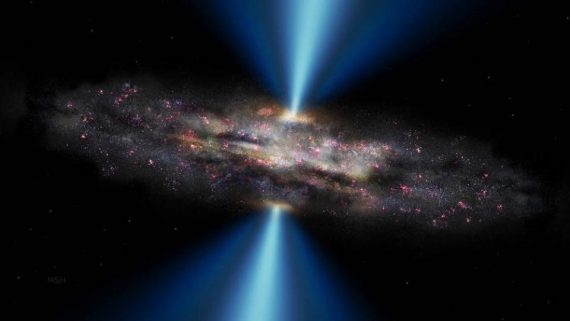 One of the reasons I’m careful to say this may not be the case all of the time is there are other ways to understand what we’re looking, and it appears than in some cases viewing angle really does matter.

In a second paper, two groups of astronomers with competing ideas on how quasars might work used Hubble Space Telescope observations to try and prove who was right and who was wrong.

Looking at systems, astronomers have observed two kinds of spectral patterns. Consistently, they see narrow emission lines that are created when the low density gas around the jet of the system is heated. They also see in some, but not all systems, broad absorption lines from orbiting of clouds of gas in the inner galaxy.

Astronomers didn’t originally know the reasons for these two kinds of spectral patterns, and active galaxies with one pattern were classified as Seyfert 1 galaxies, and galaxies with the other pattern were classified as Seyfert 2 galaxies. More than 10 years ago, as we got evidence that quasars are powered by active black holes, it was theorized that systems without broad emission lines were being observed edge on, and the rest of the galaxy blocked our observations. Sound familiar?

Well, in the case of the galactic spectral lines, this theory is getting proven true through careful views of indirect light. By looking at light scattered out of the cores that appeared polarized, astronomers were able to see faint evidence of the hidden broad emission lines. Put another way, they figured out how to look around a corner, and see the mission features.

A few enigmas still remained however. For instance, the galaxy NGC 3147 didn’t have broad absorption lines and also didn’t have the expected dust that would block those lines. Using Hubble, observers peered in for roughly an hour to see if this was just a quieter system, with the features simply turned down in brightness. It turned out, this was the case. The broad absorption line features were there, but had been lost in the glare of star light in non-Hubble observations.

This seems to indicate, broad absorption lines are always present in quasars, but are sometimes hidden, and sometimes just really faint. 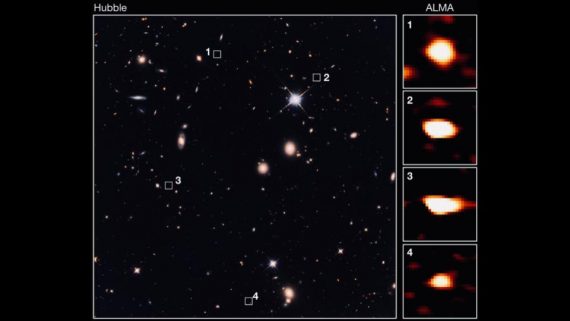 In another story of galactic astronomy, astronomers have gone on a new quest to try and understand the first galaxies in our universe. Using the Hubble’s deepest observed field, they looked for faint smudges that might hint at early galaxies, and then they went one step further and used the Spitzer Space Telescope to go one step redder.

According to an ALMA press release, “The team discovered 63 extremely red objects in the infrared images taken by NASA’s Spitzer Space Telescope: they are too red to be detected with HST. However, Spitzer’s limited spatial resolution prevented astronomers from identifying their nature.”

Using ALMA to do followup observations with amazing detail, they found 39 of the 63 sources were faint optically but radio bright galaxies – This population was 20x more than what was found optically in Hubble’s deepest field

Tao Wang, the lead author of the paper and a researcher at the University of Tokyo, French Alternative Energies and Atomic Energy Commission (CEA), and the National Astronomical Observatory of Japan, said “Star formation in the dark galaxies we identified is less intense, but they are 100 times more abundant than the extreme starbursts. It is important to study such a major component of the history of the Universe to comprehend galaxy formation.”

As so often happens, this new data means our understanding of how and when galaxies formed is a little bit off and new work will be needed to figure out how to explain the universe as it actually is. 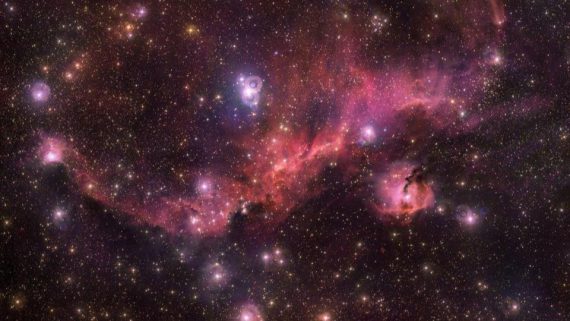 Not all press releases are big on science. Some of them are simply just pretty. This is one of those, and we’re going to let the press release speak for itself.