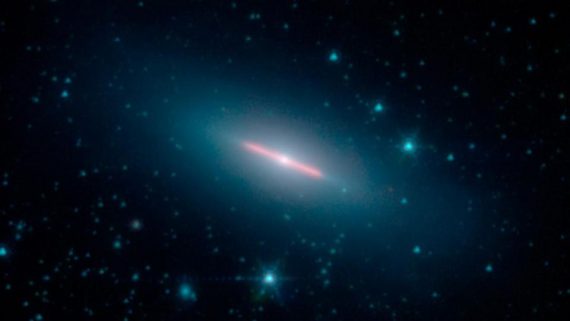 Anyone who appears on camera knows you have to know you angles. Not many can get away with strictly showing their profile, but this galaxy tried to give it a try.

NGC 5866 is a disk shaped galaxy located 44 million light-years from Earth. Seen entirely edge on, we know it has a 60,000 ly diameter, but I can’t tell you if it has spiral arms, or any other disk features.

For completely unknown reasons, this 2009 image was released today in a NASA News item, in which it is likened to a lightsaber.

I have to admit, press releases like this, which contain an old image and a bunch of clever words that don’t contain new information, used to perplex me. And then, I got funding from NASA, and began to here during the regular telecons with representatives from headquarters, that they needed content to put in front of funders, by which I mean the president and other governmental representatives. When you see these “why are you telling me about this know” news items, it often means they are running low on news, and a call was made, and someone said, well, I have this 10 year old image we never shared that’s kind of cool.

To editorialize for a moment, I have to admit that as a scientist it pains me that it is so hard to get funding that we have to make up news to keep people happy while we work on actually getting good results. As a science communicator, these items frustrate me because there seems to be an assumption that if you give me a pretty picture, I will happily promote your mission.

Well – I’m going to start calling announcements like this, and like the “gull shaped gas” release we got yesterday for what they are, pretty pictures empty of content meant to advertise missions. Yes, Spitzer and the VLT deserve funding on their scientific merits. Yes, it’s cool to share pretty pictures simply because they’re pretty – this is why I’m on instagram. I want to see your adorable dog and cat pictures and that really gorgeous garbage plate – I’m looking at you PlanetX. All I ask is we don’t pretend a 10 year old image being compared to a lightsaber is news.

This image had so much potential for explaining science. Images like this have the ability to help us understand the faint structure of the outer parts of disks. Systems like this help us see how the disk and sphere of a galaxy meet and mix. Heck, they could even gone into the history of this object, which is also called the Spindle Galaxy or Messier 102. This pretty picture had so much potential – use that potential people. Call this images what they are, glamour shots, and but give them a context that makes us want to learn more.

Ok – soap box set aside, onto some science. 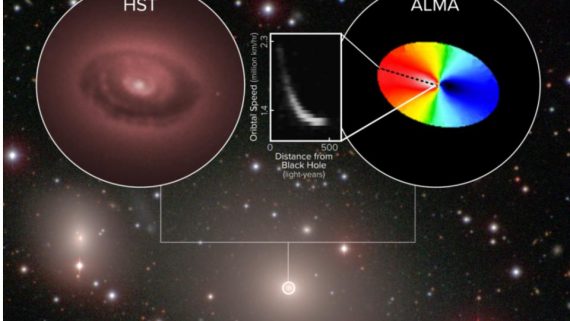 The ALMA and Hubble have once again provided a scientific 1-2 punch that helps us understand supermassive black holes. Gas and dust orbiting in the core of NGC 3258 was observed by the Hubble Space Telescope. This kind of gas – particularly the CO gas – gives off light in the mm colors that ALMA observers, and with it’s super high resolution capabilities, ALMA was able to measure the velocities of that gas in the inner 500 ly of this system.

NGC 3258, a massive elliptical galaxy about 100 million light-years from Earth.

Using these remarkable observations, astronomers calculated this galaxies central black hole weighs a staggering 2.25 billion solar masses. The thing that makes this press release worthy is that ALMA was able to get such high resolution, low error bar measurements of a system so far away. Over time, we need to gather dozens to hundreds of these kind of measurements to really understand the relationships between galaxy characteristics and the characteristics of the black holes the contain. This observation demonstrates this is going to be possible. 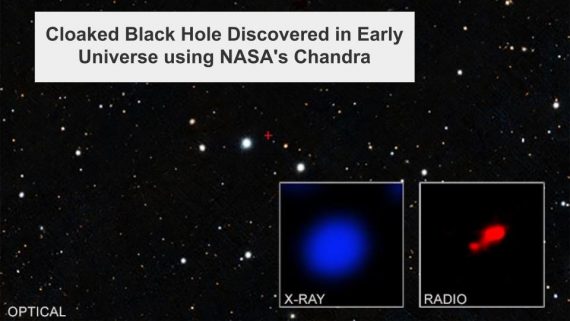 In other news, coming to us from the Chandra X-Ray Observatory, we learn that Black Holes can use Chandra.

Here I jest, but folks, I prep for this show while drinking my first cup of coffee, and the lack of punctuation in this headline made me think, “How did this system time travel, grab Chandra, take it back in time, and then get us its data?”

This may say more about me than the press release.

What they meant to say is NASA’s Chandra X-Ray Observatory discovered a cloaked black hole residing in the early universe. Light takes time to reach us, and when we observe objects that are extremely far away, we are actually seeing light emitted extremely long ago. While observing an active galaxy, one with a supermassive black hole in its center that is surrounded by a bright accretion disk of infalling material, astronomers led by Fabio Vito of the Pontificia Universudad Catilica de Chile, looked to see if they could find evidence that the systems from the most distant universe showed signs of being enshrouded in gas.

Finding systems like this is key to understanding galaxy evolution. As we talked about yesterday, it’s thought that the most active galaxies, quasars, evolve from having a gas filled core, to blasting that material out to shine bright and blue. The still enshrouded galaxies, when we see them, will be red, but finding the farthest of them will be tricky because they won’t be as bright as their non-enshrouded siblings.

Vito’s team used the Chandra X-Ray Observatory to look for X-Ray light from a series of distant quasars found optically. If they could find systems with little to no X-Ray low energy X-Rays, but with high energy X-Rays, they would know these systems were enshourded by gas that was obscuring the low energy X-Rays an active galactic nuclei is expected to emit along side the high energy X-rays. Put another way, when you see smoke, it’s a good bet there is a fire, and when you see high energy x-rays, it’s a good bet the low energy ones are there too, and something is blocking your view.

The thing is, sometimes there isn’t a fire, and sometimes the quasar isn’t obscured, and this is what is so frustrating about doing science. In this case, the galaxy in question, PSO 167-13, has a nearby companion galaxy, and it’s possible it is the source of the 3 – yes 3 – high energy photons Chandra detected in 16 hours of observation. If it isn’t the source, then this system is one that needs more observations, because now we have an optically bright quasar that is somehow also an obscured quasar, and that just doesn’t fit anyone’s models. It’s possible that in the months between the two sets of observations, the system radically changed, going from unobscured to obscured somehow, and its also possible that once again, the universe has decided that our models are not the boss of it, and it is going to shine light how it wants to shine light, and it’s up to us to figure out how its pulling off the weird and wonderful ways of glowing. 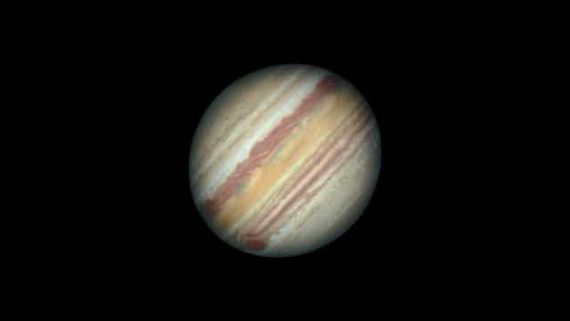 Ok, returning back to our own Solar System, NASA & ESA have one more pretty set of pictures it wants you to see. This video is compiled from a myriad of HST images taken during this year’s closest approach to Jupiter. With our Earth and this Gas Giant, both lined up with the sun during opposition, Hubble used its outstanding objects to get us full disk views that Juno, in its upclose orbit, just can’t achieve.

Once again, we need to wait to see what science comes out of this pretty picture, BUT I do have some Jupiter news to go with this picture. 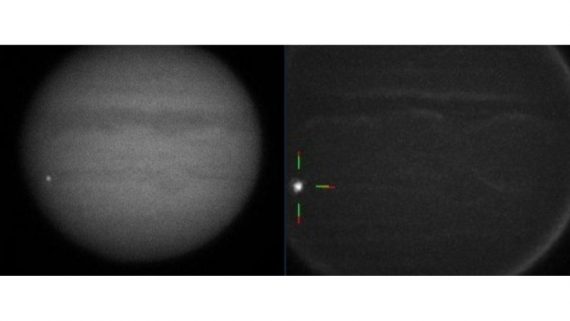 As some of you may know from social media and services like Science Alert, Jupiter has once again been attacked by an asteroid or comet that exploded in its outer atmosphere. This video comes to us from Ethan Chappel, a Texas astrophotographer who caught this event while taking video to observe Perseid meteors. It is thought this impact was too small to generate a dark splash, but folks are on the lookout to see what might be seen as the world turns to re-reveal the point of impact.

The thing I love about this observation is it shows us two things – 1, Jupiter is under constant attack, and 2) it’s possible for anyone to get lucky and catch one of these events. Back in 1994, when Shoemaker Levy 9 impacted Jupiter, we thought this a once in every several hundred years event. Now, with high quality digital detectors affordable to middle class telescope owners, we’re seeing impacts almost every year. If we are accidentally catching multiple impacts this regularly, it could be Jupiter gets hit multiple times per year instead of once per multiple centuries. This is just kind of awesome, and I for one hope some of you are able to catch these impacts during your own future observations