We have an extension until July 22 – Please go map Bennu images here! 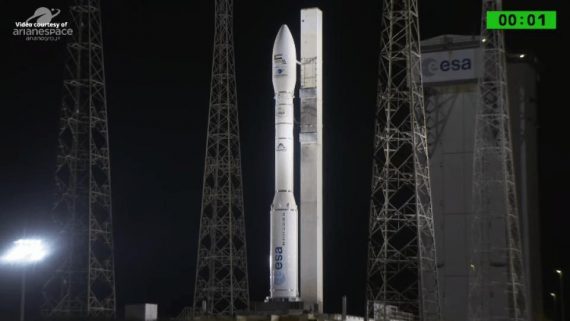 Roughly 2 minutes after launch, last night’s attempted Vega Rocket launch experienced a catastrophic failure that sent the final stages of the rocket, and its UAE spy satellite payload, into the ocean. There had been 14 prior successes of this Arianespace rocket, and it is not yet known what caused this failure. This failure wasn’t caught on camera – at least not on any available footage – but was apparent in the broadcast telemetry data. 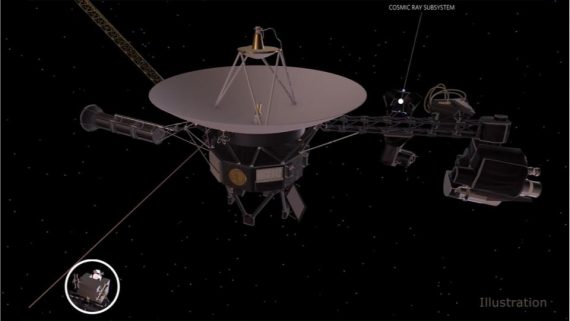 Let’s face it, going to space is hard, but when things work, they sometimes outlive anything their builders imagined. July 9 marked the 40th anniversary of the Voyager 2 flyby of Jupiter. I have vague memories of this event, mostly involving arguing that I didn’t need to take a nap to stay up and watch the data come in. Those images are still used for science and give a baseline for understanding Jupiter’s evolving weather patterns. Today, both Voyager 1 and 2 are still functional and are continuing their science duties as they escape out of our solar system. Unfortunately, after so many decades, their nuclear fuel has significantly decayed away, and the remaining radioactive materials aren’t generating as much energy as the mission’s need to stay fully functional. In order to keep doing as much science as possible, NASA scientists are now turning off heaters for some of the Voyager missions’ instruments, so their critical systems can keep going, hopefully well into the future,

But maybe not too far into the future, because I’m not sure I want either spacecraft to return with potentially evil intentions, a la Star Trek: The Motion Picture.

In other, more science-focused news, we have have some new explosive results.

As we’ve previously discussed, astronomers are currently facing a cosmic age dilemma. When we try and measure the expansion rate of our universe, we get different values depending on how we look, with the universe appearing to expand faster when we measure effects in the local universe, and slower when we look at the cosmic microwave background.

Figuring our why these numbers are different has been a challenge for a lot of reasons, including not having a way to measure distances to things in the middle distance… but that may be changing.

Astronomers combining results from VLBA observations and gravitational wave observations of neutron star mergers believe they can use these kinds of mergers as a standard candle. This isn’t entirely straightforward – neutron stars come in a variety of sizes and how we see their mergers varies depending on the orientation of the two stars. In order to constrain what’s going on, researchers have observed jets from a single merger for months on end, and have used the orientation of the observed jets to sort the orientation of the binary system. While the team has only studied one merger so far, they believe that with as small a sample as 15 mergers, they will be able to start using these events to measure distances, ultimately helping astronomers to better measure the expansion of our universe, and thus narrow down it’s 13.8 to 14-ish billion year age. 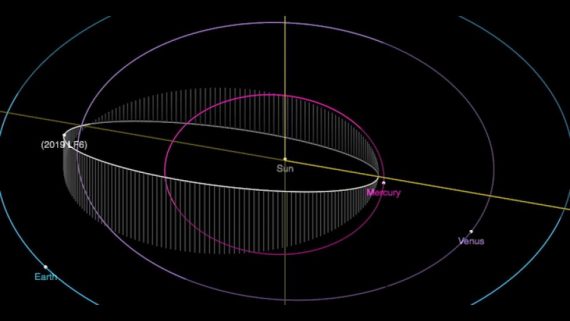 Looking at things much closer to home, the Zwicky Transient Facility has found itself an asteroid on an all time tiniest orbit. Spiralling around the sun every 151 days, this object, named 2019 LF6, crosses inside Mercury’s orbit before zipping out to linger just past Venus’ orbit. While there may be asteroids on smaller orbits, finding them will be exceedingly hard. Facilities like ZTF only have 30 minutes before and after sunrise and sunset to sweep the twilight sky for things moving near the Sun. Small and not very reflective objects can easily get lost in the twilight at the horizon. At this time, only 20 known objects with this kind of orbit have been discovered. 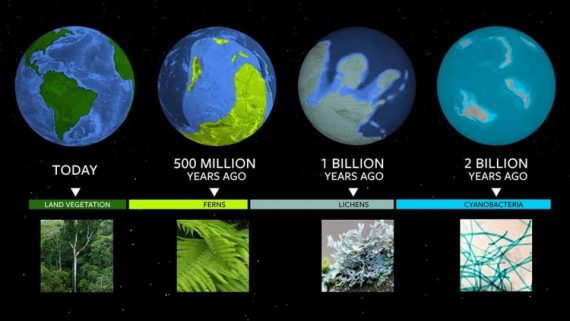 While we continue to find new tiny worlds in our own solar system, we are also looking for new Earth-like worlds in other systems. As we get better at finding these worlds and as we begin to measure their atmospheres, we need to know what to look for if we want to find life. New work coming out of Cornell University highlights what colour distributions may indicate a world has different kinds of life, and what stage that world may be in if its life is evolving the same way life evolved on Earth. Concentrating on how plants have absorbed light over the eons, these scientists have defined how factors like photosynthesis absorb out red creating a unique edge in the rainbow of reflected light from a world. While this technique can’t tell us if there is technology out there, it can perhaps help us find plant-based life, and that is a start. 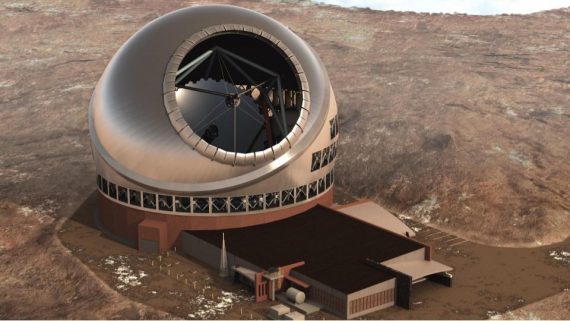 Switching gears, I have news that leaves me with really mixed emotions. In a press release from David Y Ige, the Governor of Hawai`i, it’s been announced that construction of the 30-m telescope project is slated to begin July 15. With this construction will come road closures as well as the closing of access to various regions of the mountain.

While construction of this kind of a massive instrument should be reason to cheer, this particular telescope has a controversial history. While numerous nations and locations competed for this telescope, the selected site on Mauna Kea in Hawai`i was a site where many of the indigenous people adamantly did not want a giant telescope built. Mauna Kea has been a site of contention for sometime. The lease on the peak ends in 2033, and initially limited the number of telescopes that could be built at this sacred site. By counting multi-telescope facilities such as Keck and the radio arrays as single telescopes, the University of Hawai`i, which controls the mountain, has found creative ways to obey the letter of the agreement without following the spirit of the agreement. When that agreement was written in 1968, it also was never imagined that a telescope of this size and impact was possible. It is felt by many of the local peoples that TMT’s construction means they won’t be able to say no to renewing the lease. They are also frustrated that construction means they will lose promised access to sacred places on the mountain. These concerns were very poorly dealt with by astronomers who in some cases said really not respectful things that made it clear they valued building the telescope more than they valued the local population. I personally find it frustrating that a different site wasn’t moved to, given how much places like the Canary Island and Chile wanted this telescope, but… this telescope, which will be visible rising over the edge of the crater from locations all over Hawi`i’s big island, is now starting.

Telescopes can have many different relationships with their landscape. In a story of science doing good, it’s been announced that Jodrell Banks in Cheshire, UK will be the headquarters for the Square Kilometer Array. Jodrell banks is a world heritage site where radio astronomy was pioneered, and where countless discoveries have been made. From its advanced facilities, which are run by the University of Manchester, it will be helping orchestrate observations made by the continent spanning SKA, which has telescopes being constructed in both Australia and Southern Africa: two places that see this technology as a way of advancing their people and building their technological infrastructure. This is how you celebrate your history, while building into the future on a global level worth celebrating. 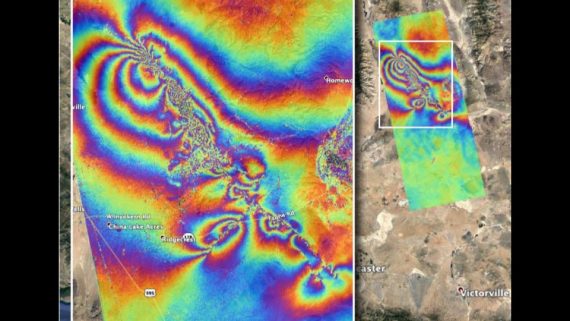 Bringing our science back to earth, our final story of the day highlights how our landscape is literally changing as things get shaken up by earthquakes. This image shows how the land rose and fell around the Little Lake fault in reaction to last week’s magnitude 6.4 and 7.1 earthquakes. Each color represents a difference of 12 cm or almost 5 inches, with red being an uplift, and blue a shift down. This map of change was created by comparing high-resolution aperture radar data taken before and after the quakes, which centered near Ridgecrest, California. Maps like this can be used to look for areas that experienced greater shaking and might have damage to pipes or other infrastructure that hasn’t yet been noticed.