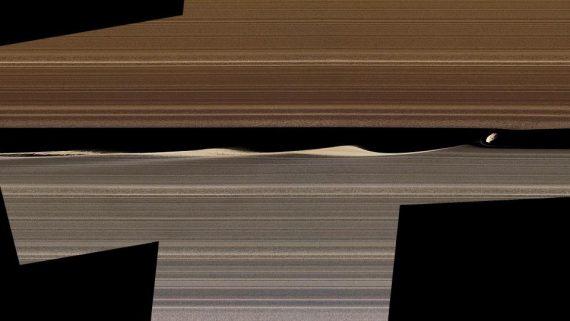 Almost 2 years after it plunged into Saturn’s atmosphere, the Cassini Space probes data is still revealing new science. In a Jun 13 Science paper, new details of Saturn’s rings are showcased in stunning detail. In this false color image, designed to enhance details in the ring structure, the tiny moon Daphne can be seen raising complex waves in the rings it shepherds as it orbits in the Keeler gap.

Due to a trick of alignment, your eyes may be trying to tell you these waves reach into the gap, but the reality is, these are vertical structures rising above the rings. When Cassini took this image, it was looking out across the rings, and without shadows, our brains can’t sort up and down from side to side. Luckily, scientists and software can, and we now recognize that this little moon is raising wave after wave as it orbits. 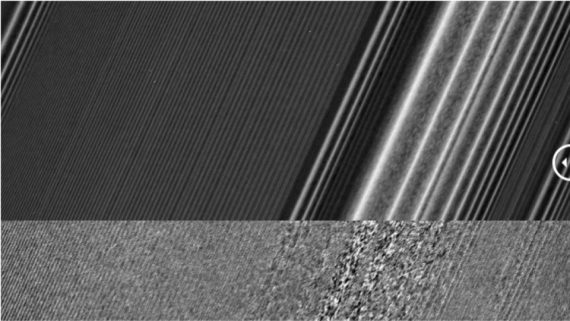 The same paper goes on to show that the structure of dust between discrete rings comes in a variety of textures. In this image, we see a regular photo of the rings as well as an image with the bright structures subtracted. This allows us to focus on how dust and other material orbits between the rings. The observed differences appear to be driven by the impact history on the rings. As material, such as from captured and crushed comets, orbits Saturn, it may hit the rings over and over, creating these clumpy patterns.

With more than 635 GB of data collected over 294 orbits, Cassini captured an amazing wealth of information that will continue to bring us new understandings for years to come. 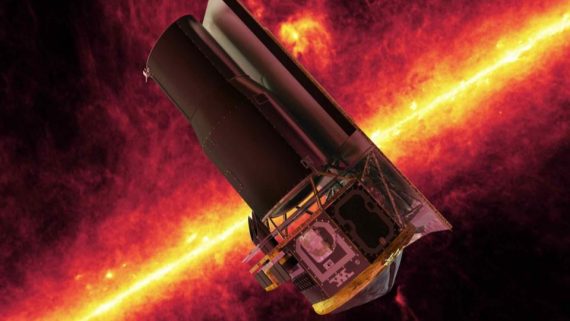 NASA’s ability to milk every possible image out of space telescopes and space probes has allowed us to keep doing active science well beyond their expected mission conclusions. This has been a very lucky thing, because the vast investments in building new telescopes that we saw in the 1990s and early 2000s is a thing of the past, and replacement telescopes really aren’t in the plans at the moment.

One of these great old orbiters is the Spitzer Space Telescope. Launched nearly 16 years ago it has already worked for twice as long as expected. This mission has had two observational phases – an early phase where their liquid cooled optics explored the sky in colors of infrared that are normally drowned out by the heat of the telescope electronics. When it ran out of coolant in 2009, it switched over to a warm phase that allowed it to keep doing infrared astronomy in colors it could still see using a passive cooling system.

Over the course of its observational life, Spitzer has revealed a new ring around Saturn, studied the evolution of the most distant galaxies, and our galaxies stars, and has even discovered new plants, including those in the Trappist-1 system.

While still doing amazing science, all good things must end, and NASA has now announced that on Jan 30, 2020, Spitzer will be permanently turned off, with the funding used to support it’s operations and science going to new programs. This shutdown is partly driven by Spitzer’s growing distance. Placed in orbit around the Sun rather than around the Earth, it is in an Earth-like orbit, but earth-like isn’t the same as it is in the same orbit as Earth. Everyday, the missing lags a tiny bit further behind our planet as it orbits a tad slower. Over the decades, this has added up, and it requires more and more effort to catch the data Spitzer returns to Earth.

This is a sad day, but given the limits on NASA’s budget, and the demands on what it must accomplish, this is understandable; understandable and sad.

It is hoped that the JWST will be able to give us back our ability to study the infrared sky when it launches – if it launches – in 2021. For now, Spitzer, please collect all the photons you can; you are only infrared hope. 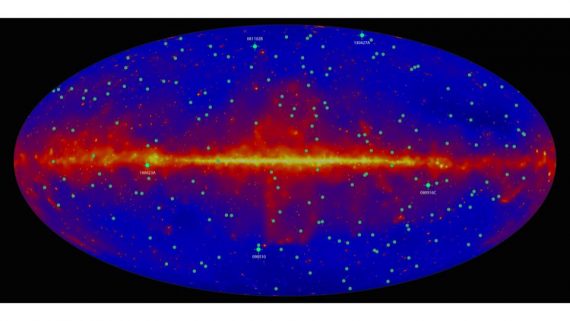 Spitzer and Cassini were just 2 of many telescopes that launched during the golden era of NASA’s great observatories program and the accompanying planetary space probes. The last of the great observatories to launch was the Fermi Gamma-Ray telescope, originally named GLAST. This telescope 10 year old telescope, like Spitzer, is still orbiting and still returning new discoveries.

One of the mysteries that Fermi, working in conjunction with missions like Swift, has worked hard to solve is the origins of Gamma-Ray Bursts. Known to come in two basic families – short duration events of at most couple seconds, and longer events that can last many minutes to occasionally several hours. We now know the short bursts and generally merging compact objects, like neutron stars, and the longer are extremely powerful gamma ray bursts. Over it’s orbital life, Fermi has detected more than 2300 bursts.

This week, a catalog of more than 186 gamma ray bursts was published in the Astrophysical Journal. This 120-author paper, highlights the vast diversity of bursts, and reflects the diversity of ways that high mass stars find to die. At the extremes, this catalog includes the ½ second duration burst GRB 081102B, the 10 hour duration GRB 16023AS, and the farthest measurable distance object, at 12.2 Billion light years, 08916C – a burst with the energy of 9000 normal SN.

Here is to hoping that Fermi will have many more catalogs to come.