Go Out and Look Up 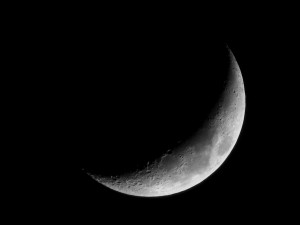 The Solar System is putting on quite a show for sky-gazers all over the world this time of year. As the temperature become more mild in either hemisphere, take a moment to go outside and look at what the sky has to offer. Three bright planets are available in the evening sky, and it’s early enough to show your littlest kids!

At the time of this blog post, the Moon is at waxing crescent on its way to first quarter. This puts the Moon high up in the sky fairly early in the evening. The Moon itself is a great target for binoculars and small telescopes for zooming in on its surface features. I recommend using a filter if you are going to view it through a telescope, however. It can be quite bright and hurt your eyes. (I know I get a bit of a headache when viewing it through an unfiltered 8-inch telescope.) A polarized Moon filter is nice since it lets you set the brightness to whatever you want, but a cheaper color filter will work in a pinch, though any visitors to your telescope might be surprised at the colorful hue! The Moon is also a decent target for partly cloudy nights, as we learned last Friday night while I was visiting the St. Louis Science Center’s open telescope observing.

The Moon and planets are also quite good for city dwellers, as the planets that have been known since antiquity are very bright in the sky. One of the first “stars” you may see in the sky tonight isn’t a star at all, but Jupiter, not far from the Moon as of this post. It is slowly beginning to sink further and further into the western glow every night, so catch it while you can. With a small telescopes, you can often see cloud bands on the planet and up to four of its large Galilean moons. 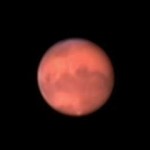 We’ve already passed the closest approach of Mars for this observing cycle, but it’s still a nice site in the sky. It actually looks reddish to the naked eye, and a larger telescope can begin to resolve out faint features on the surface such as dark patches and ice caps. We got a lovely view of that from Mike Phillips’ telescope during the Hangoutathon’s Virtual Star Party. Most telescopes, however, will show the reddish disk so that you can see that it is, indeed, a planet. 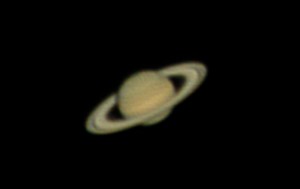 Finally, heading in a more easterly direction along the ecliptic, you get to Saturn. Saturn really us the crown jewel of the night sky. Another bright object that’s not a star, through a telescope it begins to show its rings. People (myself included) are AMAZED the first time that they see it through a telescope. Saturn is one of those rare objects that looks JUST LIKE THE PICTURES ON THE INTERNET through even a modest telescope. Through a larger telescope you might be able to see a split in the rings known as the Cassini Division. Look carefully and you might also spot its largest moon, Titan.

These planets are all lined up for excellent viewing right now, so take the opportunity while you can! Check out planetarium software like Stellarium (which is free), sky maps available on websites like Sky & Telescope, or even your favorite sky mapping mobile app. If you have binoculars or a telescope, take them outside, even if you don’t have much practice. These bright objects will be worth the effort and make easy targets for beginning star gazers. Don’t have equipment of your own? Find an amateur astronomy group near you using the Night Sky Network or Sky & Telescope, and check science centers and universities near you to see if they have open observing nights. I always recommend that people wanting to get started in astronomy check out the telescopes available out there through local groups before plunking down the cash for their own. Plus, observing can be a social activity!

This Friday night, if you’re out observing, tell the world with the hashtag #OneSky. I’ll be taking a telescope out to the local custard stand again, and people around the world will be sharing their telescope views with their neighbors as we celebrate living under one night sky. If it’s cloudy, then there’s an excuse to stay indoors and mark some planetary surface features with us!

Many thanks to all the astrophotographers that share their views with use via a Creative Commons license.