The MESSENGER spacecraft team has released a three terabyte data set of its continuing mission to map and study the surface of Mercury. That’s almost a million mp3s, or 360 hours of HD movies, or 600,000 selfies. Except it’s actually science.

MESSENGER is continuing its extended mission to characterize the surface, interior, and exosphere of the nearest planet to the Sun. From images to maps to spectra, all of this new data is available through NASA’s Planetary Data System. Although available to anyone, it often requires a bit of software-fu known to planetary astronomers. That’s why, to fulfill one of the science goals of mapping all the craters on the surface, we built a pretty nice interface that you can use in your browser to help with the science.

I keep bringing up Planet Mappers: Mercury Edition since, as our latest project, it hasn’t gotten quite as much citizen science love as the Moon and Vesta. Besides, it has a very different surface from the other two. Okay, yes, there are lots of craters. But Mercury is a little bit different due to its size and history. For one, as a more massive world than the Moon, it tends to have a higher population of secondary craters. These are craters formed from the debris of an initial impact on the surface by an object from space. Mercury is also criss-crossed with ridges and crater chains, so a special linear feature tool was built into the CosmoQuest interface to deal with them. You’ll find yourself truly on an alien surface when exploring the scorching hot terrain of Mercury. 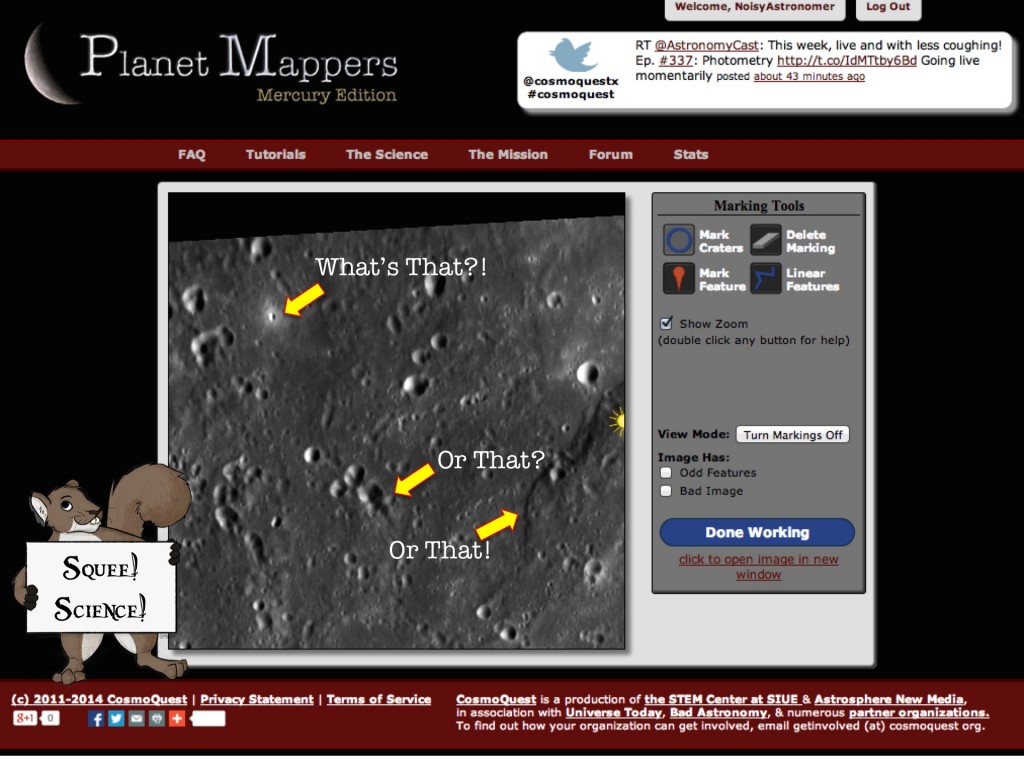 Chuck the Squirrel illustration by @Ceiling_Cow

The size of the recent data release by MESSENGER highlights the need for citizen scientists just like you to help! It’s a data avalanche over here. So, see if you can get a friend to try it and get hooked, too! Every little bit of help counts, so go ahead and mark some craters during that 5 minute break. I even used the commercial breaks during this week’s broadcast of Cosmos to do some Mercury mapping.

Mercury truly is unfolding with increased study. Think about it, the flyby’s of the planet by the Mariner 10 spacecraft in the mid 1970s sent back only a few thousand pictures of Mercury’s surface, and that of only 45% of the surface. Today we have over 200,000 images from MESSENGER, twice its expected productivity.

So, show Mercury the same love that you have for the Moon and Vesta, and help planetary scientists map its surface in detail for the very first time.

← Cosmos Reborn Earth or Not Earth for iOS is HERE →