I’ll admit… I didn’t see the original Cosmos when it was on television. In fact, I didn’t even see it until I had already decided on astronomy as a major. Carl Sagan’s Contact was a huge inspiration to me becoming an astronomer, but that’s another story. 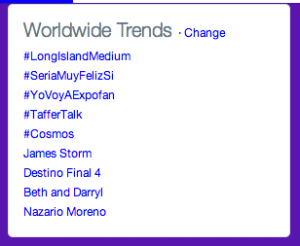 I now have Cosmos on DVD, and have seen the whole series several times, certain episodes more than a few times, and even used some of my favorite clips in teaching the Life Beyond Earth class at the University of Virginia. It doesn’t have the same nostalgia that it does for so many people. I came to it late, but loved it anyway.

This weekend, a whole new journey started: Cosmos – A Spacetime Odyssey. It’s available to watch for free on Hulu, but I’m glad we sprung for the digital antenna so I could actually watch the live broadcast. #Cosmos quickly became a worldwide trending topic on Twitter as we, the space-loving community, came together to watch the show. 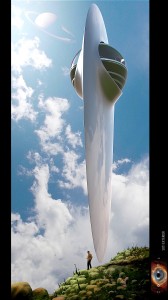 First I thought it was a cylon raider. Then EVE.

Some things are very different about this production of Cosmos. The one that struck me the most is how much our understanding of the Universe has grown since the airing of the original series. There are not just the few (but lovely) planets in our Solar System, but hundreds upon hundreds of known exoplanets out there in our Galaxy. We had long since suspected their existence, but the confirmation is spectacular. We’ve also populated our Solar System with quite a few more robotic explorers since the original Cosmos, a sight that planetary scientists Carl Sagan would have loved to see. I noticed that as Neil deGrasse Tyson took his new, souped-up “spaceship of the imagination” for a spin.

I didn’t watch the show expecting to learn new science or history, but instead wanted to see how they presented the information. Of course I was watching and live-tweeting so I didn’t get the full immersive experience, choosing instead to share thoughts and jokes over Twitter, like speculation over the nature of the new ship, appropriate places to insert Monty Python references, and a genuine joy that such a science-based and wondrous show was being broadcast on network television. I did particularly like the telling of the story of Giordano Bruno. Though many of us are familiar with how his story ended, the focus was not on that, but the daring imagination that it took to conceive of a massive Universe. Nevertheless, Tyson reminds us after the story that Bruno’s idea was just a conjecture and had to be, as it later was, backed up with evidence. Besides the story itself, I appreciated the telling of it through animation which was clean, fun, and allowed a great canvas of exploration. There is much more they could do with an animated Bruno that actors could not, as in the original series. Yet it wasn’t childish either, and a companion comic book series could come naturally out of that production. (I’d buy it.) 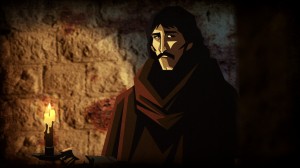 “Do they even READ Aristotle where you come from?!”

The special effects were, yes, pretty, but I think we’ve been conditioned to see pretty effects, and so that wasn’t the most gripping part. The art is in the story-telling, both the history and the story of the science of what we know. The one place that the effects actually did get my attention was when the rather realistic looking Tiktaalik showed crawled up out of the water and onto land. I decided that I needed one for a pet.

Another big difference from the original? Commercials. Well, at least I assume it came without commercials originally because it was on public television. As someone not used to watching live TV anymore, it was… weird. But I found a great way to entertain myself during those interludes: mark up some images of Mercury! I could do about one per commercial break in order to be thorough, as well as keep up with Twitter replies. I’d like to see if more people would join me in some commercial-fueled CosmoQuest mapping next week? I’m not completely anti-advertising, but commercials can be… jarring.

I’m curious to see how others liked the show, space aficionados sure, but also very importantly people who are otherwise not that familiar with astronomy. What do they think of Cosmos? How might it inspire them? How was it received by children? (Like this kid… OMG ADORBZ) Hopefully we’ll hear a lot more in the coming weeks as the show continues.

Let us know what you thought of the episode. Hope to see you on Twitter next week during the next broadcast!