Mercury is a planet that was first imaged by Messenger 10 back in the 1970s and only 45% of its surface was photographed.

After over 30 years, NASA’s MESSENGER spacecraft flew by the planet three times before settling into orbit in 2011. MESSENGER has provided full-planet photographic coverage through two cameras (MDIS – Mercury Dual Imaging System). New discoveries are being made all the time, and we’re asking for your help to make even more.

MercuryMappers is launching with the primary goal to create a global crater database that will inform a variety of studies. 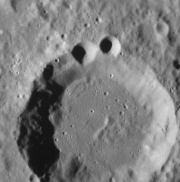 Some preliminary studies based on MESSENGER images of Mercury show that secondary craters may start to dominate the crater population for craters smaller than 10 km across. The current thinking as to why this may be is that objects that make craters on Mercury travel over 2x as fast as they do near Earth, this generates high velocity (so high energy) ejecta, and Mercury’s larger gravity relative to the Moon means that these ejecta blocks won’t escape – they’ll fall back and make more craters. So while there is a theoretical reason for why Mercury would have a larger secondary crater population, extensive work needs to be done to verify it and determine the true amount of contamination. 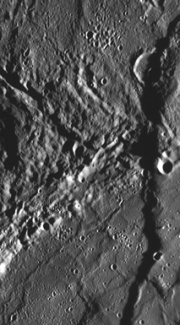 By mapping craters across the planet, we can start to piece together the global crater population and figure out what these new images are showing us about the solar system’s inner-most planet.

MercuryMappers will also create a database of linear features on the planet’s surface. Examples include the long lobate scarps, or cliffs, that seem to cut across craters and plains. These are formed by tectonic processes unique to Mercury in the Solar System. As the planet cooled and contracted on a global scale, these scarps were formed like “wrinkles” or “breaks” in the crust. Thus, studying these scarps gives planetary geologists clues into Mercury’s interior and history. Wrinkle ridges are thought to have been formed by this process as well. Linear features also include graben, which are like cracks or troughs, which are thought to form from tectonic processes that pull the surface apart, such as cooling lava flows.

Back to Planet Mappers.