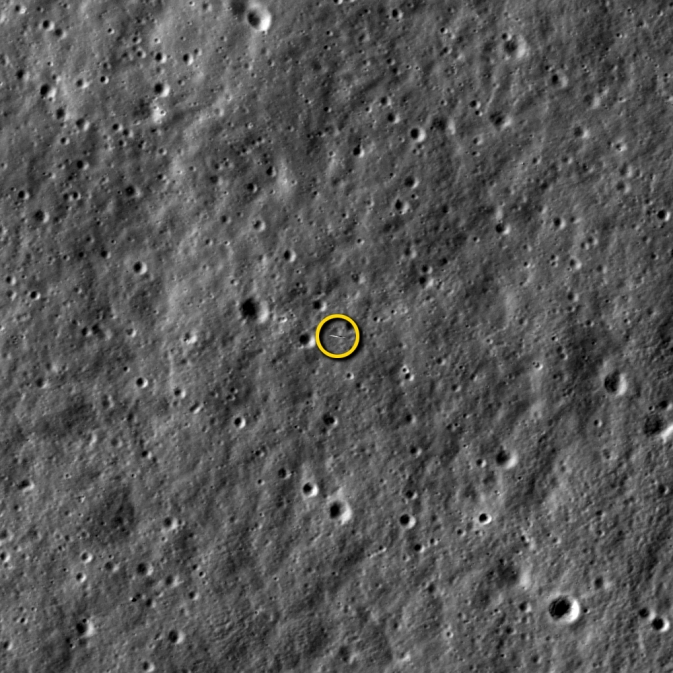 In the last few years, we’ve had a lovely little run of spacecraft photographing each other on other worlds. There was the Phoenix lander on Mars, photographed by the Mars Reconnaissance Orbiter during descent and after landing. Spirit, Opportunity, and Curiosity have all been spotted as rovers get bigger and orbiting cameras get better resolution. The Lunar Reconnaissance Orbiter (LRO) has been taking incredibly detailed photos of the Moon’s surface since 2009, catching the first glimpses of the Apollo landing sites from orbit and giving us a look at the Moon’s newest visitor, the Chang’e 3 lander and Yutu rover.

LRO recently picked up another spacecraft from orbit, LADEE, or the Lunar Atmosphere and Dust Environment Explorer. The picture isn’t spectacular at first, glance, just a blur really, but then you realize that this picture had to be taken while these orbiters were whizzing by each other at thousands of miles per hour.

Though LADEE won’t sit still for a photo op, the image was de-smeared to get a good look at the spacecraft, where the body of the orbiter and engine nozzle are visible. LRO continues to map the Moon’s surface in exquisite detail, and you can help move the geologic exploration forward in Moon Mappers. LADEE continues to probe the tenuous exosphere of our planet’s satellite, and you can help that project by counting meteors or real-time lunar impacts.

We can’t guarantee that you’ll come across another spacecraft in your images, but we can share the cool results when it does happen!