We’re still following the news of the supernova that went off in M82 a couple of weeks ago. With the official name SN 2014J, it appears to have reached peak brightness the other day at magnitude 10.5 according to Sky & Telescope. So, if you have a small telescope and want to see it yourself, do it quickly! Here is a handy chart from Universe Today. Unfortunately for me, a run of telescope problems and schedule conflicts kept me from seeing it, but I’ll try one more time once the clouds clear around here. Of course, the Virtual Star Party crew took a look at the supernova that they HAPPENED TO MISS the first time around. Check it out at timestamp 7:22 below:

The discovery credit DID go to a group of students and their professor who were imaging the galaxy with a 14-inch telescope in north London. Although they weren’t the first to image the supernova, they were the first to notice that something was a bit off in the image, providing yet another example where paying close attention to your data and being willing to investigate that “funny” thing pays off. Super major congrats to those four students who got to be a part of a very cool astronomical discovery, the closest white dwarf supernova since 1972, right at the beginning of their education!

With such a nearby explosion of this type, several people wanted to do follow up with radio telescopes, even though white dwarf supernovae have never shown a radio afterglow the way that their core-collapse cousins do. However, it’s work taking a look since very faint radio emission would be easier to see close up.

So, M82 was mapped with the Karl G. Jansky Very Large Array (VLA). This Y-shaped array of antennas in the New Mexico desert has been one of the most productive telescopes of the last few decades with its exquisite imaging capability. (It also happens to be one of my favorite places on Earth.) The VLA can make radio maps with very fine details due to the spacings between antennas. The antenna’s were not at their largest spacing, but the second largest, with one of the three arms moved out to the further pads. This is know as BnA configuration, and a diagram can be seen here.

Sadly, but not unexpectedly, there was no radio afterglow detected from SN 2014J. However, the astronomers did take the opportunity to make a lovely image of M82 at these wavelengths, made with the emissions of high energy electrons and ionized gas created in older supernova remnants and star forming regions in this starburst galaxy. This is one of the best images of this galaxy as seen in the radio, showing wispy, faint features that have not been seen before. So, though the supernova wasn’t detected further out in the disk, this new look at the turbulent inner regions of M82 still provides surprises for us. 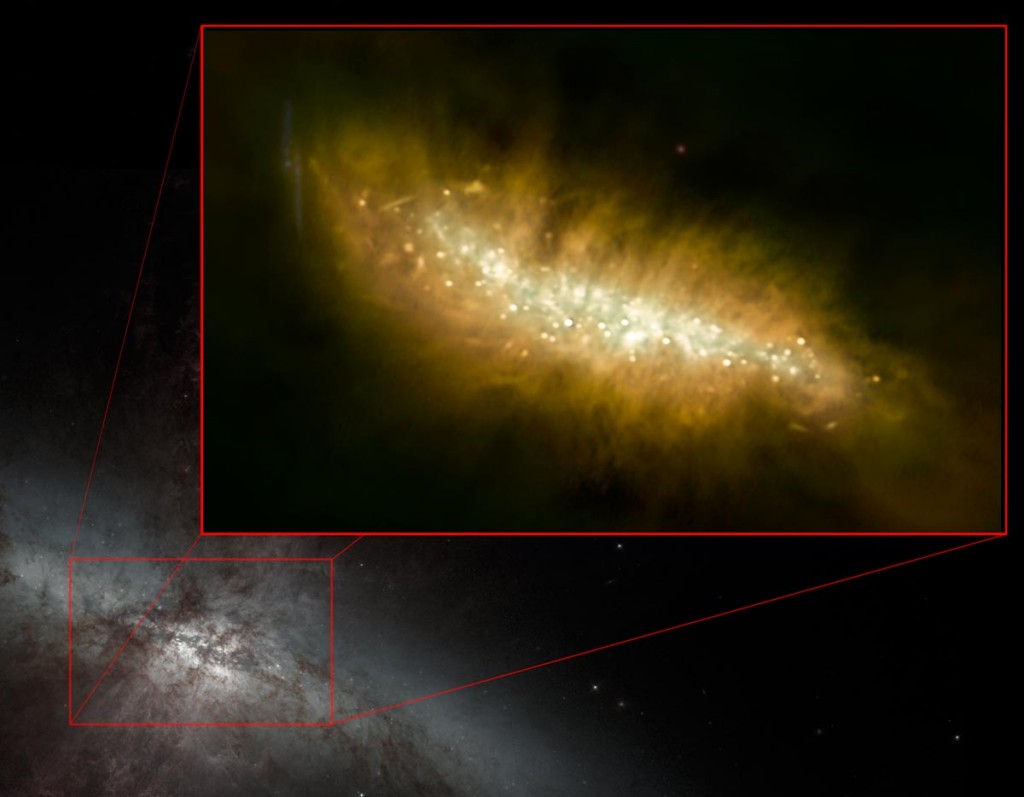 @MatthewCobb on Twitter noted that the new radio image looks like a faint paramecium, and I can’t help but agree. Or, maybe it’s an adorable, fuzzy paramecium, with the new “wispy” structures resembling the cilia with which paramecia get around. I doubt anyone will be in favor of renaming M82, the “Cigar Galaxy” to “The Paramecium,” but we can pretend.