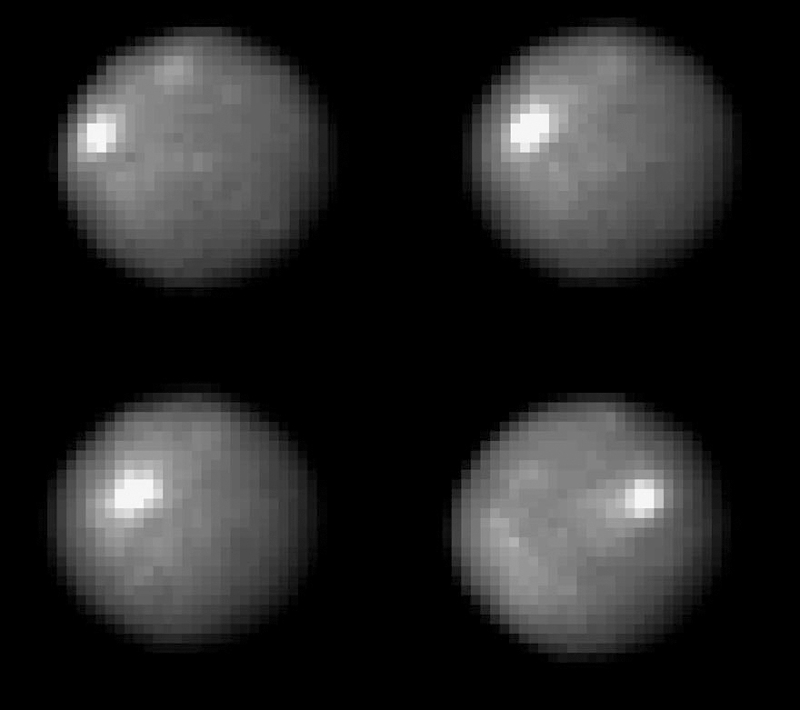 We got some lovely news last week that was almost eclipsed by the very exciting supernova in M82. It turns out that asteroid/dwarf planet Ceres has water geysers jetting out from its surface.

Ceres has a storied history, first being dubbed a planet upon its discovery in 1801, then demotion to asteroid 50 years later. The largest body in the asteroid belt, it achieved dwarf planet status in 2006. It has long been a subject of study for astronomers with instruments such as the Hubble Space Telescope, but the best pictures are grainy at best. Nevertheless, the mass and size of it suggested a body of lower density than solid rock, that is, having some ice or water present. Spectroscopic analysis of the light reflected back from its surface confirm the signature of water. In a “Ceres Series” Hangout with CosmoQuest on August 15, planetary scientist Britney Schmidt even called Ceres “the gatekeeper to the history of water in the middle solar system.”

I don’t think, however, that any of us were expecting to see plumes of water. Just as Saturn’s moon Enceladus and, more recently, Jupiter’s moon Europa have shown, water ice just won’t stay put in the solar system. Data from the infrared space telescope Herschel revealed the water plumes in several observations, showing possible seasonal variation. It is fair to say now that there is definitely water, frozen or otherwise, on Ceres. This further complicates our strict, old-school definitions of asteroid and comet, as there are many objects that seem to be a little bit of both.

As Fraser Cain said in our last Weekly Space Hangout, gee wouldn’t it be nice if we had a spacecraft on its way to Ceres? Of course, we do! After mapping Vesta for a year, the Dawn spacecraft has been on a journey to Ceres to begin a year-long mapping campaign there. You can still help the citizen science efforts from Vesta’s mapping mission while you patiently wait for the arrival at Ceres, scheduled for early 2015, and I highly recommend that you do. We got an up-close view of the weird, wonderful, and Dr. Seuss-esque surface of Vesta, and we’re not done exploring. So can you imagine what we’re going to find at Ceres, now that we know there is water at or near the surface?! With the one spacecraft, we’ll be viewing two bizarre worlds of the asteroid belt, and maybe unlocking even more clues to the origin of water in the solar system.

If you missed our “Destination Ceres: Icy World Revealed” Hangout back in August, I highly recommend you check it out.