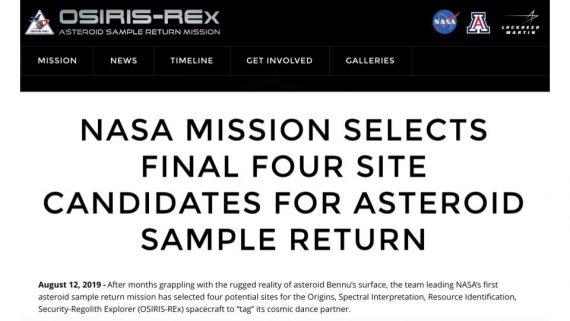 Yesterday, all of us were surprised to see a series of NASA social media posts and a press release announcing the sites selected for followup observations and detailed examination as the mission team works to find the safest and most scientifically interesting places for the little mission to explore.

CosmoQuest has been part of this project, but as a contractor to the University of Arizona, I didn’t know NASA’s release was coming, and I have to admit, my day got a bit distracted, and yesterday’s Daily Space episode didn’t get written up for those following along on Patreon.com/CosmoQuestX. Don’t worry folks, I will be catching up… but only after I catch you up on all things Bennu.

The original mission plan has had to get radically redone on a regular basis as we’ve gone from what we imagined Bennu would look like to seeing what the world actually is. We’d thought, the selected sample sites would be nice, danger free areas with a radius of at least 25 m or 82 feet. Bennu had other ideas – clear regions that big just don’t exist! Instead, the mission team had to go searching fo sites 5-10m in radius, or 16-33ft in radius. That’s a bit terrifying, as the spacecraft is 2.4m across. 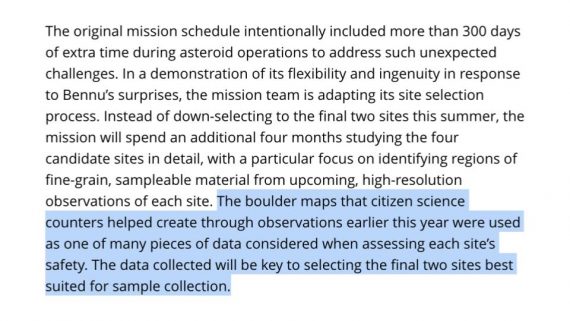 The images needed for this site selection were delivered to CosmoQuest back in May, and since May 22 you have been helping us search through them, measuring boulders, mapping craters, and marking rocks. You have actually made nearly 10 MILLION rock marks. 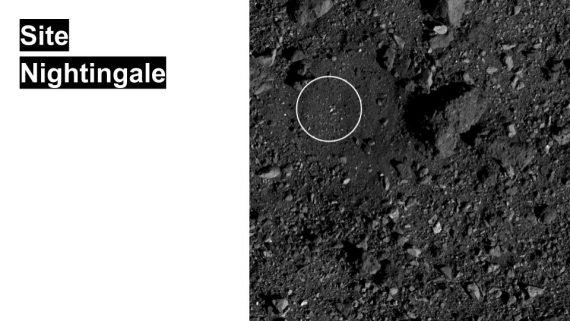 Nightingale – this site contains mostly fine-grained, dark material and it has the lowest albedo, or reflection, and the lowest surface temperature of the four candidate sites. Nightingale’s regolith also has the highest color variation, which suggests the presence of diverse materials. 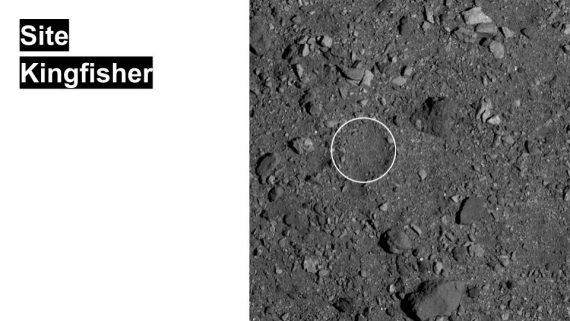 Kingfisher – This site is particularly interesting because of its location in a small crater, which means it may be a relatively young feature compared to Bennu’s larger craters (such as the one in which Sandpiper is located). Younger craters generally hold fresher, minimally-altered material. Kingfisher has the strongest spectral signature for hydrated minerals among the four sites. 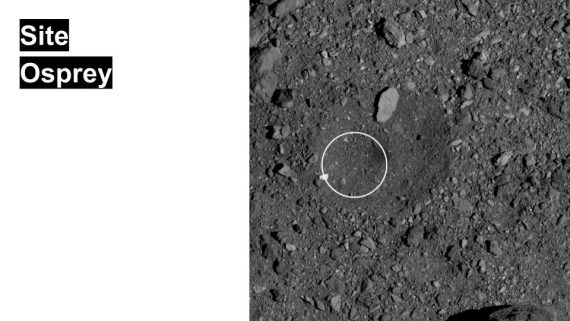 Osprey – The diversity of rock types in Osprey’s surrounding area suggests that the regolith within the sampling regions is also diverse. Osprey has the strongest spectral signature for carbon-rich material among the four sites. It also ranks second for the highest albedo and color variation among the candidate sites. A large, dark (low albedo) patch of material in the center of the site is of high scientific interest for the mission team. 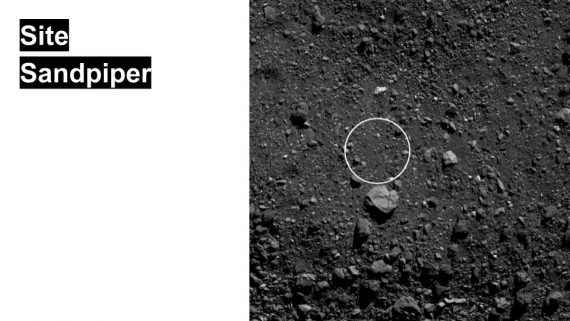 Sandpiper – The site itself is a relatively flat area with a 16 ft (5 m) radius. Sandpiper is surrounded by steep slopes and large boulders that are scattered throughout the area. There are two smaller, relatively young craters near Sandpiper that may have ejected fresher material into Sandpiper’s sampling region. Sandpiper has the second highest albedo variation among the possible sample collection sites. Hydrated minerals are also present, which suggests that Sandpiper may contain potentially unmodified carbon-rich material. 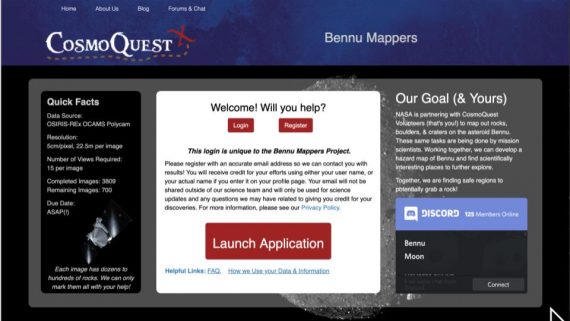 Now, the astute among you are noting that Bennu Mappers still has 700 images not quite done. Each of these images has multiple views – but not the 15 views we want so we have solid statistics.

These incomplete images have people asking: Do we keep going. The answer is Yes. Yes you do.

It’s not over until it’s published, and once we have all your marks in place, we’re going to begin a whole of statistical research to understand Bennu, understand you, and understand how we can do more science, and better science, by openning our doors to anyone willing to help.

Also – stay tuned for online party details, because we are so going to party.

AND – we’re going to give you credit. Later today I’ll be working with colleagues at the University of Arizona to sort how we strategize letting people know what they contributed, and letting the world know how these heros are.

The first press release came out yesterday, but more are coming! 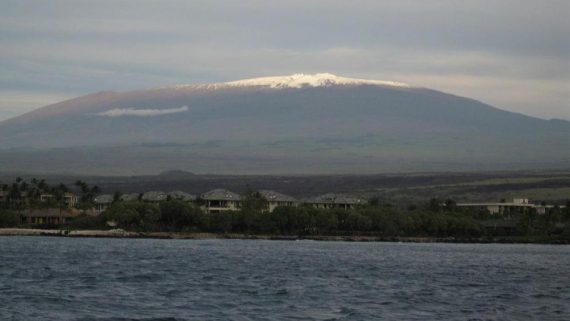 Now to switch things up a bit…
Last week, on August 9, I received a press release that regular observatory operations at Mauna Kea observatory were resuming. For a variety of reasons, including both respect of the picket line and fear of the picket line, observatory staff were restricted from going to the Mauna Kea peak to main their telescopes. As things settled into a routine, staff were allowed back, and the science started back up.

On August 12 press releases trying to make the telescopes necessary resumed. Let me unpack that a bit. As I’ve talked about before, we get a lot of press releases that are saying “Hey We’re Awesome – look at us LOOK AT US” but that don’t have a lot of science content. Last week, we got one from Spitzer about an image that was taken in 2009, and that didn’t have any new science I could find associated with it. This “Look at me” kind of press release is an unfortunate necessity – with name recognition comes opportunity, support, and funding.

Right now, Mauna Kea Observatory is in need of all those things!