Send Your Name to the Sun as Part of the Parker Solar Probe!

NASA’s Parker Solar Probe will swoop to within 4 million miles of the sun’s surface, facing heat and radiation like no spacecraft before it. Launching in 2018, Parker Solar Probe will provide new data on solar activity and make critical contributions to our ability to forecast major space-weather events that impact life on Earth.

Parker Solar Probe is an extraordinary and historic mission exploring arguably the last and most important region of the solar system to be visited by a spacecraft to finally answer top-priority science goals for over five decades.

But we don’t do this just for the basic science.

One recent study by the National Academy of Sciences estimated that without advance warning a huge solar event could cause two trillion dollars in damage in the US alone, and the eastern seaboard of the US could be without power for a year.

In order to unlock the mysteries of the corona, but also to protect a society that is increasingly dependent on technology from the threats of space weather, we will send Parker Solar Probe to touch the sun. 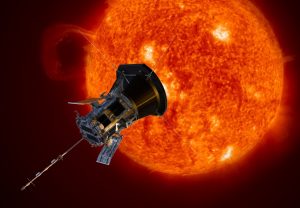 And you can be a part of the first mission to touch the Sun!

Submit your name and it will be included in a memory card that will fly aboard Parker Solar Probe spacecraft.

Come with us as we plunge through the Sun’s atmosphere, closer to the surface than any spacecraft before it, facing brutal heat and radiation conditions—and ultimately providing humanity with the first-ever close-up view of a star.

Submissions will be accepted through April 27, 2018. Visit the Parker Solar Probe Signup here!