The 365 Days of Astronomy podcast is a production of the Astronomical Society of the Pacific, and it includes content created by volunteers from around the globe. You can explore content at 365 Days Of Astronomy site. 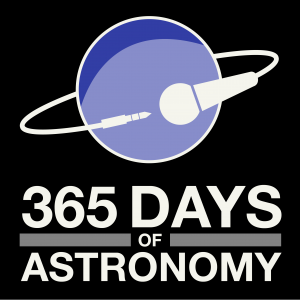 Astronomy not only amazes people with the beauty of the night sky and universe, but it also provides an exciting gateway into science and culture. From citizen science projects like our own CosmoQuest, to community engagement projects like Astronomers Without Borders and the Night Sky Network, to so many other projects around the world, there is no limit to the ways people can get involved.

“In our tenth season, we’re celebrating the people who have been so much a part of this show: the everyday people who volunteer their time to science,” says executive producer, Dr Pamela L. Gay. “For ten years, amazing people have come on 365 Days of Astronomy to share their observing stories and teach us about this science they’re passionate about. This year we celebrate all they have done and continue to do.”

Our focus on amateur astronomy and citizen science doesn’t mean our shows will only talk about these topics.  From asteroids to exoplanets, and from supernovae to superclusters, this show is here to share exciting breakthroughs from all of space science.  Three Partial Solar Eclipse and two Total Lunar Eclipse will bring another dimension of excitement to 2018 and more opportunities to engage with our audiences.

All stories need to be told, and this is your chance to take part.  All are welcome. The diversity of our content can be measured in our myriad of accents, topics, and ideas. We are actively seeking contributed content on the history of astronomy, the latest news, observing tips, and how fundamental knowledge in astronomy has changed our paradigms of the world.

According to audio producer Richard Drumm, “Science is how we know what we know. With it we can park cars on the Moon. How cool is that? With us, you too can participate in science, the greatest endeavor humanity has ever attempted. Come on in, the dihydrogen monoxide is fine!”

Your voice can be heard alongside our regular series, including among others: Astronomy Cast, Cheap Astronomy, Awesome Astronomy, Ask A Spaceman, Observing with Webb, Space Radio, Deep Astronomy, Cosmic Perspective, NOAO, The Weekly Space Hangout, Space Scoop, Q&A, Urban Astronomers, and Travelers in the Night. The 365 Days Of Astronomy show has been downloaded more than 10 million times and has included podcasters from 6 continents and countless countries.

“The International Year of Astronomy has become the success story of Astronomy popularisation around the world. It’s success is due in large part to the prominent role of amateur astronomers. As a legacy of IYA 2009, astronomy enthusiasm has increased,” says program director Avivah Yamani. “Southeast Asia and Indonesia in particular are examples of how the astronomy community can grow significantly when communities are involved”.

365 Days of Astronomy is a legacy project of the International Year of Astronomy. It started with an idea to publish one astronomy audio show a day, everyday of that year. In 2009, the project was awarded the Parsec Award for “The Best Infotainment” podcast. It was also nominated for in 2010-2012 for a Parsec Award in the category “Best Fact Behind the Fiction”. In 2015, 365 Days Of Astronomy received a Silver Communicator Award at an international awards program recognizing big ideas in communications. Sharing knowledge is central to our programs, and we thank all of our contributors and listeners for taking part in this beautiful journey.

Don’t want to podcast, but still want to help? We are also seeking sponsors for our shows. It costs us about $66 per episode to produce 365 Days of Astronomy. For $800, you can sponsor one day a month for the entire year. Each day (or set of days) comes with a chance to get your message to the audience included at the beginning and end of the episode. Don’t have that much to give? Other sponsorship levels are available, and start as low as $20. These donations are essential to cover the costs of editing, posting, and hosting our content.

The 365 Days of Astronomy podcast is heard by 5,000 listeners per day. The show is directed by Avivah Yamani with audio production by Richard Drumm. It is part of the CosmoQuest virtual research facility, which invites you to learn and do science at cosmoquest.org.

The Astronomical Society of the Pacific, established in 1889, is a 501(c)3 nonprofit organization whose mission is to use astronomy to increase the understanding and appreciation of science and to advance science and science literacy. The ASP connects scientists, educators, amateur astronomers and the public together to learn about astronomical research, improve astronomy education, and share resources that engage learners of all kinds in the excitement and adventure of scientific discovery. In addition to CosmoQuest, current ASP programs and initiatives support college faculty, K-12 science teachers, amateur astronomy.

Join in as podcaster: http://cosmoquest.org/x/365daysofastronomy/join-in/

Donate to our media program : http://cosmoquest.org/x/365daysofastronomy/donate/