We see so many craters from the perspective of a bird, flying directly above. But what are impact craters like from the ground, up close and personal? First of all, it can be hard to identify an impact crater from the ground, even when you are very nearby. This is because we are so used to thinking of craters as nice, round depressions. For example, as seen from the air Meteor Crater seems to be a typical, small circular pock-mark. 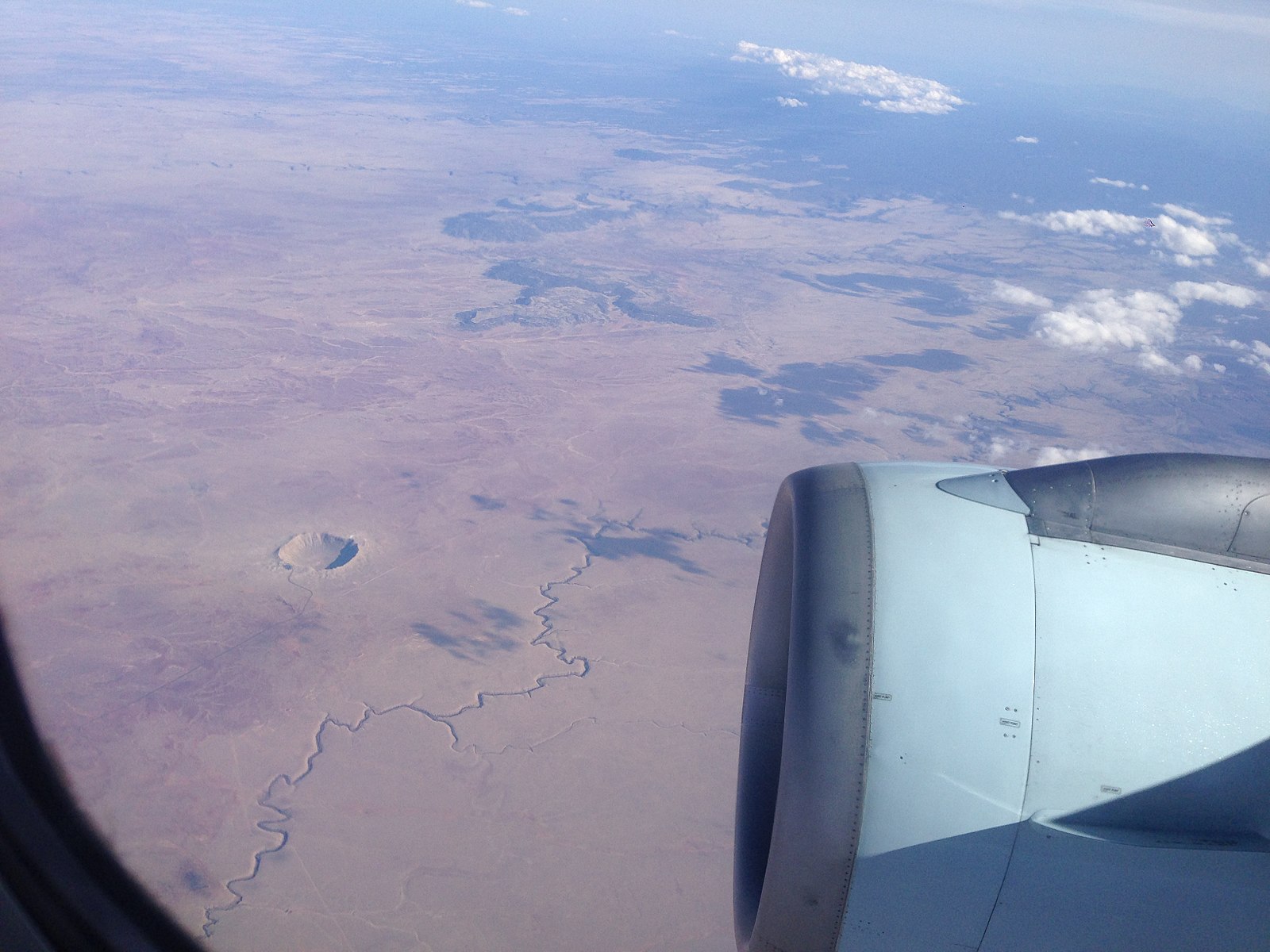 A picture of Meteor (Barringer) Crater taken from an aircraft 36,000 feet above the ground. (Image credit: https://commons.wikimedia.org/wiki/File:The_Meteor_Crater_from_36,000_feet.JPG Used under CC 3.0 License.)

But if you approach it from the ground, you don’t see a nice round depression. Instead you see the raised rim looking like a plateau or table (mesa) on the landscape. The rim of Meteor Crater, below, looks like a row of small hills connected together.

Driving to Meteor Crater, you can see the raised rim from a distance as you approach on the road leading up to the crater. (Image Credit: https://www.psi.edu/epo/explorecraters/barringertour.htm Go to this site for a full tour of Meteor Crater from the ground. G. Osinski, University of Western Ontario.)

Once you are at the crater and climb up the raised rim, you can see the depression stretching out before you. Below is a geology field team I was a part of that investigated the crater. We could examine the ejecta near the rim, which just as predicted is upside down. This is because the explosion that creates the impact crater blasts the surface up and out and “inverts” the material that gets emplaced near the rim. Our team obtained permission to go down into the crater. “Simple” craters may seem smooth and perfect from a distance, but they all have local variations that make hiking them a challenge. There are blocks along the rim, and slopes of debris sliding down the interior. 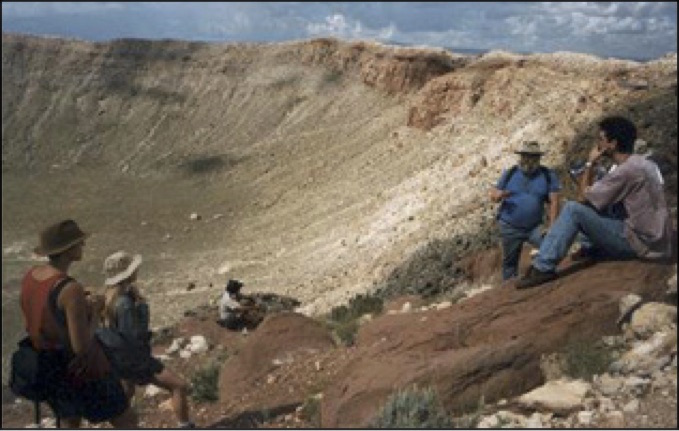 Field team from the University of Arizona examining the rim of Meteor Crater. (Credit: Jennifer Grier)

NASA of course wanted to use this natural setting to train the Apollo astronauts about what they might encounter on the Moon. Astronauts visited Meteor Crater along with specialist Gene Shoemaker to understand more about impact craters, and to experience the terrain similar to what they might find on the Moon. 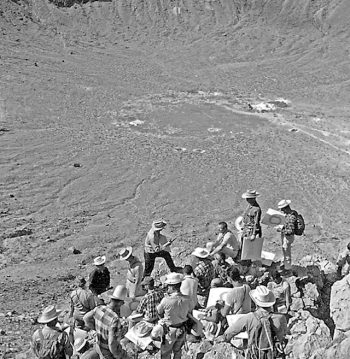 And certainly the astronauts did get up close and personal with a whole suite of lunar impact craters, from big to small. Some were small enough to step over, while others were vast. They walked and even used the lunar rover to visit and study them.

So while you are investigating craters from above, imagine what it might be like to be there in person. What do you think you might experience there? How would being there in person change your perspectives on the measurements you are making now? 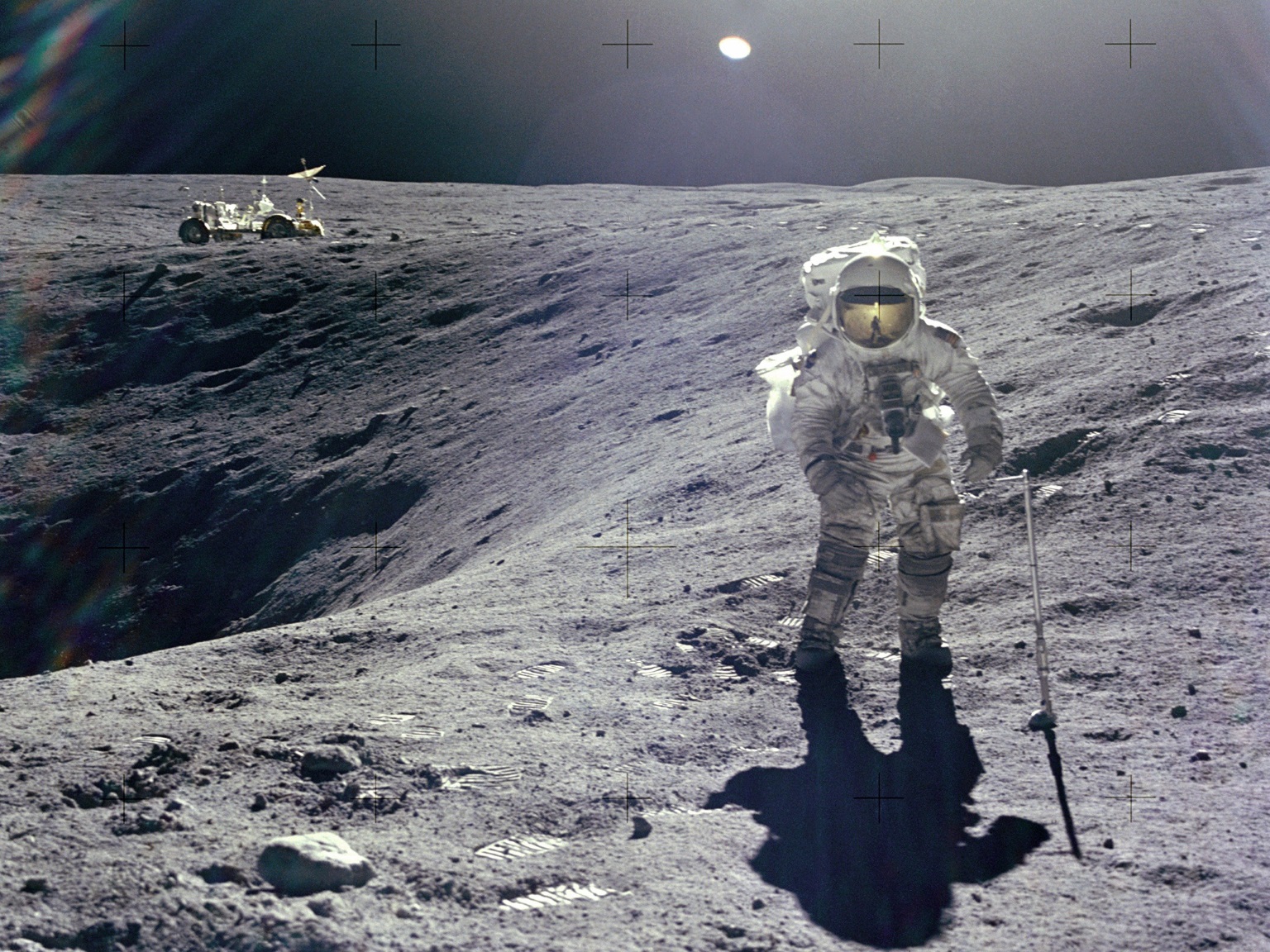 An Apollo astronaut on the surface of the Moon near the edge of an impact crater. Note the rover in the background. (Credit: NASA)