This is a post from Matthew Richardson, our CosmoQuest Science Team post-doc. 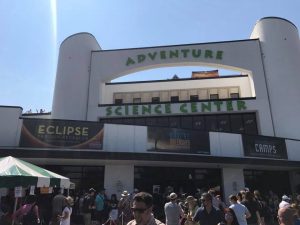 On August 19-20, 2017, the weekend of the Great American Eclipse, Nashville had it’s own festival at the Adventure Science Center. The Music City Solar Eclipse Festival gave the public a great opportunity free-of-charge to learn more about the eclipse and science before the big eclipse!

The event took place in the parking lot directly in front of the Adventure Science Center. On the first day of the event I arrived roughly around 7:45 AM to setup my booth by the 8:45 AM deadline. After finishing up my booth by 8:30 AM, I took a quick stroll around the grounds to see the other exhibits on display, and I immediately realized that there were a wide range of categories covered by the different exhibits (e.g., tech, science, sci-fi, dance, art, etc.). 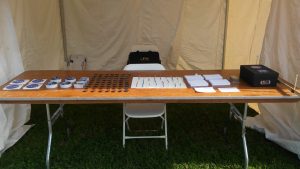 My first visitors were other exhibitors and security personnel, which provided a great opportunity to work on my delivery of the information I had planned to present. Mostly all of my conversations started with me showing how to create/use a shoe box pinhole projector, and I would finish by talking about CosmoQuest. In cases where the sky conditions were just right, a few clouds but still enough light to see the Sun, visitors appeared to show much more enthusiasm when I talked about CosmoQuest. For visitors that had young kids with them, I showed them how they could create pinhole art using an index card. Some even stayed for a while to let their kids create their own pinhole art cards at the booth. 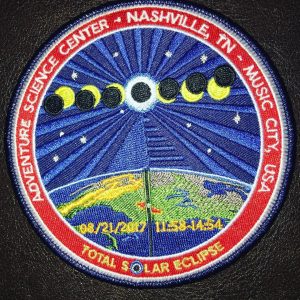 I spent much of the first day manning my booth, but during my lunch break I took a little time to grab some shrimp fried rice from one of the food vendors at the event and listen to the live music playing on the main stage. By the second day I had my routine down pat and was able to handle much larger crowds. I think I spoke to nearly 200 people over the two day event. I came up with this estimate based on the number of stickers/buttons that were taken by visitors. Interestingly, very few people asked questions about the solar eclipse. For those who did, I used my scaled Earth-Moon apparatus to explain what would happen on the day of the eclipse.