The ExoMars orbiter is preparing to make its first scientific observations at Mars during two orbits of the planet starting next week. 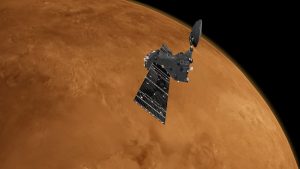 The Trace Gas Orbiter (TGO), a joint endeavor between ESA and Roscosmos, arrived at Mars on 19 October. It entered orbit, as planned, on a highly elliptical path. The main science mission will only begin once it reaches a near-circular orbit about 400 km above the planet’s surface after a year of ‘aerobraking’ – using the atmosphere to gradually brake and change its orbit. Full science operations are expected to begin by March 2018. But next week provides the science teams with a chance to calibrate their instruments and make the first test observations now the spacecraft is actually at Mars.

In fact, the neutron detector has been on for much of TGO’s cruise to Mars and is currently collecting data, checking that nothing changed after the Schiaparelli module detached from the spacecraft. It will measure the flow of neutrons from the martian surface, created by the impact of cosmic rays. The way in which they are emitted and their speed on arriving at TGO will tell scientists about the composition of the surface layer.

During the primary science mission two instrument suites will take a detailed inventory of the atmosphere, particularly those gases that are present only in trace amounts. Of high interest is methane, which on Earth is produced primarily by biological activity or geological processes such as some hydrothermal reactions. 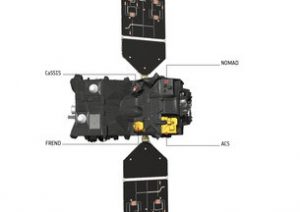 These measurements, carried out in different modes by pointing through the atmosphere towards the Sun, at the horizon at sunlight scattered by the atmosphere, and looking downwards at sunlight reflected from the surface, will allow them to analyse the atmospheric constituents.

They will attempt to detect some natural nightside airglow – an emission of light in the upper atmosphere produced when atoms broken apart by the solar wind recombine to form molecules, releasing energy in the form of light. The scientists have also planned observations of Phobos, the larger of the planet’s two moons. Finally, the camera will take its first test images at Mars next week. 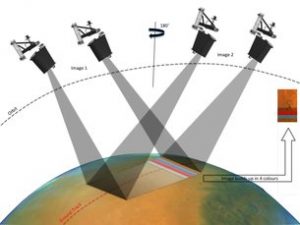 The camera is designed to capture stereo pairs: it takes one image looking slightly forwards, and then the camera is rotated to look ‘back’ to take the second part of the image, in order to see the same region of the surface from two different angles. By combining the image pair, information about the relative heights of the surface features can be seen.

Ultimately, the camera will be used to image and analyse features that may be related to the trace gas sources and sinks, to help better understand the range of processes that may be producing the gases. The images will also be used for looking at future landing sites.

“We’re excited we will finally see the instruments perform in the environment for which they were designed, and to see the first data coming back from Mars,” says Håkan Svedhem, ESA’s TGO Project Scientist.

After this brief science instrument demonstration period, which also serves as a test for relaying this data back to Earth, along with data from NASA’s Curiosity and Opportunity rovers, the focus turns back to operations and the preparations required to for aerobraking next year.

Reported from ESA EXOMars website. You can find out more information about ExoMars at the ESA website, and you can already look at some of the features which will be examined in greater detail by ExoMars by using our Mars Mappers program!