Evan Gough over at Universe Today writes that recently, a student at the University of British Columbia (UBC), Canada, has discovered four new exoplanets hidden in data from the Kepler spacecraft.

Michelle Kunimoto recently graduated from UBC with a Bachelor’s degree in physics and astronomy. As part of her coursework, she spent a few months looking closely at Kepler data, trying to find planets that others had overlooked. 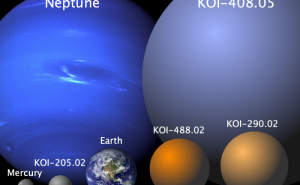 The four new, but as yet unconfirmed, exoplanets. Credit: University of British Columbia

In the end, she discovered four planets, (or planet candidates until they are independently confirmed.) The first planet is the size of Mercury, two are roughly Earth-sized, and one is slightly larger than Neptune. According to Kunimoto, the largest of the four, called KOI (Kepler Object of Interest) 408.05, is the most interesting. That one is 3,200 light years away from Earth and occupies the habitable zone of its star.

Read more about these amazing discoveries here at Universe Today and read the scientific paper here.