Las Cumbres Observatory have partnered with Asteroid Day and Universe Awareness to create a website which allows you to take pictures of asteroids, using a global network of telescopes. Las Cumbres Observatory has 18 professional robotic telescopes at seven remote astronomical sites across the globe. With this website, you can join the international campaign to study and raise awareness about asteroids. 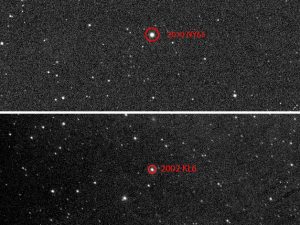 By entering your email address, you will trigger observations on the global telescope network. Once your observations have been taken they are automatically combined with all other images of the selected asteroid, into a time-lapse video. You can view all of this on the Las Cumbres Observatory Asteroid Day website (http://asteroidday.lcogt.net).

“Taking images of asteroids can be an involved process because they are moving through space,” says Dr. Edward Gomez, Las Cumbres Observatory’s Education Director and software developer for the Asteroid Day website. “We wanted to simplify this process, making it into a single click that triggers a request for images on Las Cumbres Observatory.”

Participants have a choice of two asteroids to observe. Both are scientifically interesting, in different ways.

“We chose two asteroids we wanted to study further, that would be passing close to Earth around Asteroid Day,” said Dr. Sarah Greenstreet, post-doctoral fellow on the Las Cumbres Observatory NEO team. “By combining observations made by the public with some of our own we hope to learn about how fast they are rotating and what their surface is made from.”

Asteroid Day is held each year on June 30th, the anniversary of the largest impact in recent history, the 1908 Tunguska event in Siberia. Anyone can sign up to help this effort by collecting images with Las Cumbres Observatory until 00:00 UTC on July 1st at http://asteroidday.lcogt.net.

The program is taking place on the LCO Global Telescope Network and is funded in-part by the NASA Planetary Defense Coordination Office and the Near Earth Object Observations Program.