← When a Null Result is a Result China's Newest Moonshot! → 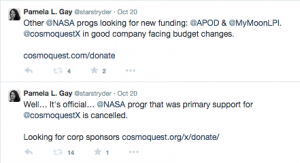 I inadvertently created a bit of concern on the forums with a tweet I posted on Monday. As I stared at my inbox, I realized it was time to pull my head out of the sand and admit that the NASA ROSES EPOESS grant that I successfully competed for in 2008 and 2011 (and that I was hoping to apply for again) is not going to be competed again on a useful timescale. It was time to admit, I have to get creative, and that I’m going to be competing against some of the best folks in NASA EPO in trying to get creative as we all struggle to stay funded somehow. Here is what I saw on my screen as my heart staggered a bit in panic.

(At this stage it is unclear what the new Science Education call for proposals will be, but it is clear it will be on a time scale that is not useful.) Different aspects of CosmoQuest are all funded in different ways, but our single largest funding source has been our NASA ROSES EPOESS grant:

So this is where we are. How we got here is complex, and rests on my shoulders. The NASA ROSES EPOESS Grant was last competed in 2011, and I did get an award. For many reasons, I haven’t really competed for any other large grants since then. In 2012, I had some significant health issues (which I maintained radio silence about and are wholly in the past) and had to deal with significant sexual harassment and discrimination issues (that have been blogged about). That year, recognizing I had 3 years of funding, I worked hard building CosmoQuest but didn’t have the energy needed to write any large grants (I wrote and we were awarded several small grants/contracts). In 2013, several of us worked on a project outside of CosmoQuest that we believed would produce revenue to fund all of CosmoQuest. It didn’t, and while I wrote (and was awarded) several small contracts/grants, I invested my time on that non-lucrative project instead of on large-grant writing. This is 2014. This year, when I should have spent my winter months writing grants, I instead spent it trying not to land in the hospital as I fought pneumonia. I missed all the big winter deadlines. I’m now working on grant after grant after grant for the fall deadlines. Unfortunately, there isn’t anyone else at CosmoQuest who can spend significant amounts of their time working on grants and fundraising. If we fail to secure needed funding, it is on me. If we are successful, it is because I have an amazing staff who are building programs worth funding. In order to stretch our funding as long as possible, I’m doing the following things: donating all my speaker fees to CosmoQuest at SIUE, reducing my salary to part-time (and thanking my spouse a lot), applying for every grant that looks reasonable, working to clear the hurdles to start using Patreon at SIUE, and starting to feel out corporate sponsorships. Those of us here at CosmoQuest are going to keep fighting to keep our programs going. I am deeply afraid that we’re going to be running on a month to month budget (except for student salaries, which I’ve protected) starting in January. In order to maintain all SIUE staff at their current funding levels, we need $350k per year. That’s it – we can pay all our salaries and insurance for the about what Hillary Clinton gets for one speaking engagement or what Mark Zuckerburg earns in an afternoon. I don’t know yet where I’m going to find that $350,000 per year for salary, but… There won’t be a relevant entrepreneur I won’t look under.