#TBT: How Many Craters Are On the Moon?

Welcome to ThrowBack Thursday! On Thursdays, we like to highlight a blog post from the early days of CosmoQuest. Now, 2012 wasn’t that long ago, but we’ve grown quite a bit since the early days, and we’d like to make sure that everyone gets a chance to read some of the great introductory material that was written when the project launched.

This week, we’re featuring Stuart Robbins’s post from February 7, 2012, titled “How Many Craters Are On the Moon?” It’s a fine question and one we get asked a lot when we tell people that we need their help to mark craters and surface features. Enjoy!

Pamela Gay recently asked me, “How many craters are there on the moon?” It was an interesting question and I don’t think I made her job easier with my initial answer that effectively was, “Depends on what you mean.”

Craters form at all sizes on objects without an atmosphere. On the moon, this goes from the gigantic South Pole-Aitken basin that’s ~2,500 km across and 13 km deep, to tiny micrometeorite craters called “zap pits” that can only be seen under a microscope in the samples returned by Apollo.

The number of craters at a given diameter increases via a power law as you go to smaller sizes. This means that if you halve the diameter you’re interested in – say 20 km craters to 10 km craters – you can’t just double the number at 20 to estimate the number at 10 (if you could, then the power law exponent would be 1 — a linear fit). The exponent is usually between -2 and -3. This means that if we decrease the diameter by 2, the number of craters goes up by around 22 to 23 (4-8x). Basically: There are many more small craters than large craters.

On the moon (the object we’re working on for, well, “Moon” Mappers), no one has done work to sizes this small. Previous lunar crater catalogues until about 10 years ago were incomplete and only covered craters of general interest, so there were many more catalogued on the near side than the far side. 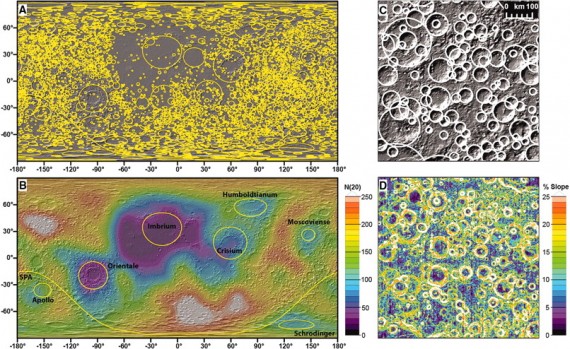 Recent work by Nadine Barlow has been to catalogue all lunar craters down to about 5 km, but she isn’t finished yet so we don’t have a full census. A few people – such as Caleb Fassett with help by Seth Kadish – did a global catalog down to 20 km craters. They found 5185 craters. And somehow they got a big NASA press release out of it … I counted many more than that and didn’t get any press release, not that I’m bitter nor jealous ‘r anything.

Back to the question: How many craters are on the moon? With the Kadish et al. work, we have at least a starting point from which to estimate the number of smaller craters. One way is to simply assume a power-law exponent and extrapolate. If we assume a -2 exponent, then we only get around 250x more craters, or around 1.3 million. A -3 exponent and we have around 4000x more craters, so around 20 million down to 1 km. That’s a big range (and a lot of craters).

A third way is to do small test regions and then scale up to the size of the moon. You have to be careful how this is done, though, because the moon’s surface isn’t all the same. You can tell that just by looking at it from Earth with your unaided eye: It has bright spots with lots of craters and dark spots with fewer craters. I counted all craters down to 1 km over three small 5°x5° regions of the lunar surface in preparation for a grant proposal I’ll be submitting this month. That amounts to only 0.15% of the surface area of the moon. But, if I scale up my numbers from that, I arrive at there being about half a million craters >1 km on the moon. That’s in between (sort of) the other estimates, and it’s similar to what I got for Mars – a planet with 4x more surface area but one that has undergone a lot of resurfacing.

Moon Mappers is using images that are about 1-3 km across. This means that pretty much the largest craters we’re asking you to find are 1 km across.

I’ve done a tiny test region around the Apollo 15 landing site that we’ve been using as a benchmark for your crater markings. In that tiny, tiny region, I counted about 5,000 craters that were larger than 18 pixels across (roughly 10 meters). That test region amounts to just a fraction of a percent of the total surface area of the moon.

In the images we have uploaded so far, we expect there to be a few thousand craters per image. Some will have more, some will have less. But at this point, it’s very very difficult to estimate how many craters will be found at the >10 meter level, given the huge range of estimates I listed for the >1 km craters.

Suffice to say, I think we can all agree that it’s “a lot.” One estimate that I tried to make a few years ago came in around half a billion.

It’s not the intent of Moon Mappers to create a global lunar crater database down to 10 meters. Localized in places, yes. But global, well … we’d need the global population of Earth working on it for awhile before we came close.