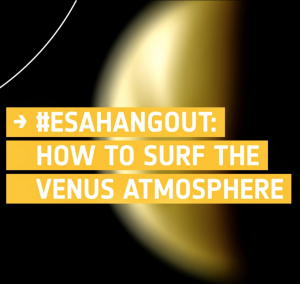 Venus is a planet blanketed in a thick, soupy atmosphere, but that doesn’t mean it is beyond our grasp. The Venus Express spacecraft has been orbiting our sister planet for eight years and has completed its science mission. Its last month has been spent orbiting lower and lower into Venus’s atmosphere in preparation for the end of the mission. Tomorrow at 8am PDT (15 GMT) you’ll be able to ask questions of the European Space Agency’s science and spacecraft operations specialists about how to “surf” the thick, toxic atmosphere and what they’ve learned along the way. Join their Google Hangout on Air or tweet them with #surfvenus. Enjoy!