We were super-excited as the paper worked on by this team using your contributions was accepted by the journal Icarus. We put out a press release, as did CU Boulder, and Stuart made two great videos giving an overview of the work. I’ll link to the shorter one and embed the longer one below:

Naturally some people want even greater detail that those sources. One of my favorite things to do is to read interesting papers that are attached to press releases or find something interesting on arXiv and blog about it for a general audience, as I do on Discovery News. Even a well-crafted press release may be missing some interesting details. Plus, I wasn’t actually involved in this particular work, other than cheering you on to mark more craters, so I’m looking at it with relatively fresh eyes. I’d like to take a tour through this paper in a series of blog posts, with a bit of help and guidance from Stuart, so that everyone can dig into and understand the science that they are doing when they continue to use the Mappers projects here on CosmoQuest.

First I’d like to give a very broad overview of the science case being discussed in this paper and used for Moon Mappers. If you haven’t already done so, check out the “The Science of MoonMappers” page right here on CosmoQuest, written by the principal investigators of the MoonMappers project. In particular, here is the gist of why we care about craters:

One of the main uses of craters is to tell ages. On the moon, we have a chronology that tells us that a surface that has a certain number of craters of a certain size will be a specific age. The basic idea is that if a surface has been around longer (it’s older), it will have accumulated more craters.

We think that this is such an important concept that we covered it in a new activity created for the Terraluna unit. (Scroll on down to “Mapping 1” to find it.) Now, the cratering rate isn’t constant over the entire history of the Moon, of course, but it is a way to establish relative ages of surfaces. The actual ages can be pinned to particular areas, those visited by the Apollo program, with careful radioactive dating of the lunar rocks collected at those sites.

When presented to middle school students, we get across the idea that more craters means older surface. We can show that very generally by counting craters in a given piece of an image, and assigning each piece a “color” for the number of craters in it. Surfaces with only a few craters get a blue overlay; the next set get green, a few more craters get yellow, and a few with lots of craters can get red. And you end up with a big map that looks kind of like this one (though we may have undercounted a bit during this particular NSTA workshop): 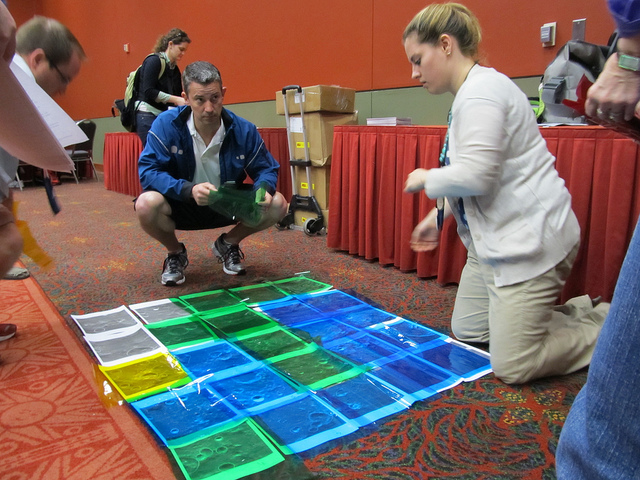 Working up from that simple description, we can talk about the number density of craters in a given region. As the simple demonstration above does, you pick surfaces with the same surface area to compare to each other. Then, you look at how many craters there are above a certain size. In general, there are going to be fewer large craters and many smaller craters. However, you can rank the relative age of each surface based on the crater counts above a certain size. The older surfaces will have more craters. It has had more time to collect impacts. Your plot of the number density of craters above a given size might look like this: 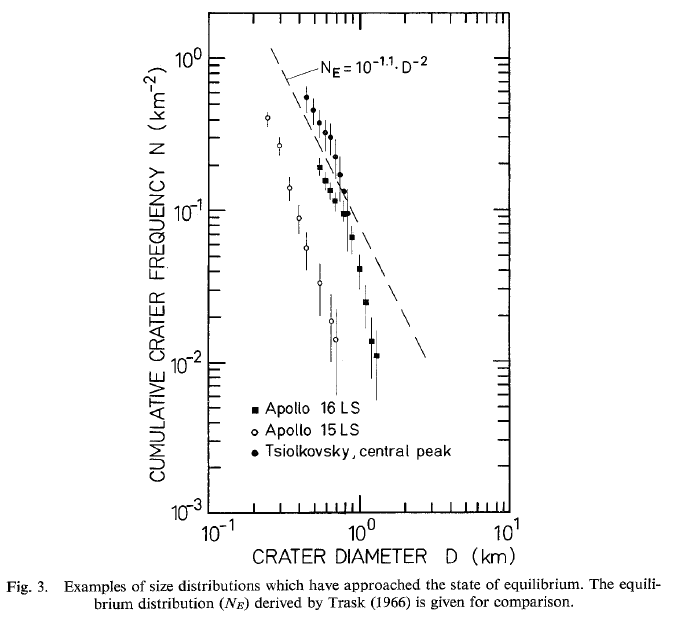 What you see above is a graph from a landmark paper by Neukum et al. 1975, recommended to me by Stuart when I was first learning about this science.  The horizontal axis is the minimum crater size for counting, from small on the left to big on the right, on a logarithmic scale. (10-1 = 0.1, 100 = 1, 101 = 10). The vertical axis is the crater number density, or number of craters per each square kilometer. Not that there are several areas marked and they have slightly different positions on this graph.

Such graphs and studies have been made for decades with very little investigation into the method of crater counting itself. After all, a planetary science expert should be able to identify and measure a crater with no problem, right? Well, some craters and regions aren’t so easy to count and disentangle. Plus, different individual scientists may have difference between them, even though we’d like to imagine that we’re all perfectly objective tools. Look at the following example of a very faint crater. Would everyone be able to pick it out?

In the next post, we’ll talk about how one goes about testing these different crater experts and look at what work had been done up until now on the problem.