How many time have you heard that Google+ is over? Dead? A ghost town? We know that’s not true, and neither do our friends and fans over on Google+. We love Google+, largely in part because of the Hangouts on Air which let us share and communicate science with you.

So, we were quite pleased to see the Virtual Star Party and the Virtual Landing Party for the Mars Curiosity Rover listed among the “12 Reasons Google+ Isn’t as Bad as You Think” on the Huffington Post. Aimed at those still skeptical of the social platform, the article lists some of the many reasons that Google+ is worth a look, including gorgeous photos, (nearly) unlimited space to get your thoughts out, and the live streaming of, well, anything.

You probably couldn’t be at JPL for the landing of Curiosity, but the image of Amy Shira Teitel’s face tells the whole story, and Hangouts can share that. 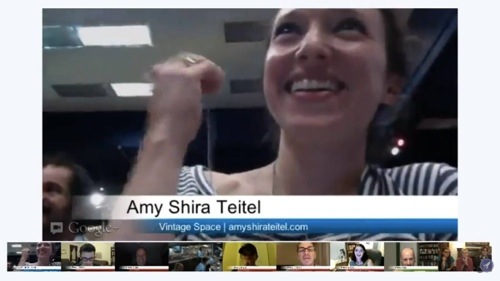 The Virtual Star Party brings you live telescope views every week, and you never have to leave your warm house. With Astronomy Cast, Learning Space, and the Weekly Space Hangout, we share the background, outreach, and news around astronomy happening today. So, thanks Google for making the technology so we can make that happen.

As Fraser Cain likes to say, you CAN be assimilated into the online space world. We’re always looking to connect with new bloggers, reporters, scientists, and aficionados who share their views of the cosmos. We’re a network of colleagues working towards a more science-literate world. And here at CosmoQuest, we’re building a community of people to learn and do science together. We’re glad to have you join us along the way in any way that you can.

Even if it’s just taking advantage of gifs.

P.S. Stay tuned on Twitter for the #ScioVirtual hashtag on Friday as we discuss ways to do virtual events well.

P.P.S. Thanks for the link, Scott!