Flash on the Moon

The Moon gets banged up. A LOT. The craters of the Moon are an invaluable tool in determining the geologic history of the Moon. Not all craters are ancient as impacts are happening today.

Astronomers in Spain detected a bright flash on the Moon in September 2013 and have published their findings (may be paywalled) in the Monthly Notices of the Royal Astronomical Society. Go ahead and watch the video of the impact as caught by their cameras below:

The Moon Impacts Detection and Analysis System uses several robotic telescopes to monitor the Moon for impacts or flashes just like this. The flash itself reached a peak brightness of 2.9, brighter than the North Star, but you had to be watching at JUST the right time to see it. The entire flash only lasted 8 seconds. From the brightness of the flash, the impactor was estimated to have a mass of 450 kilograms, almost a thousand pounds, or the mass of a small car. A typical meteoroid density gives it a size of a meter in length, much smaller than the rock that exploded in the atmosphere above Chelyabinsk a year ago. The new crater would be 46 meters in diameter, smaller than the typical resolution of the Lunar Reconnaissance Orbiter, though if it produced very long rays, its effects might be seen. There is no official word yet on whether this impact crater has been spotted. 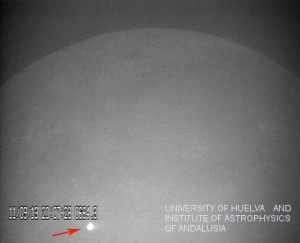 An image of the flash resulting from the impact of a large meteorite on the lunar surface on 11 September 2013, obtained with the MIDAS observatory. Credit: J. Madiedo / MIDAS

LRO has been used to see recent craters on the Moon as its extended mapping mission lets astronomers compare images taken a few years apart. One such new crater corresponds to a bright flash seen on the Moon in March of 2003. The monitoring of the Moon is sure to continue with projects like MIDAS and the continued imaging of the Moon by LRO. Help make the most complete maps of the lunar surface with Moon Mappers where you get to identify and measure geologic features in LRO images.

Keep your eyes peeled for anything unusual!