Over the past year, I’ve taken my first tentative steps into education research and assessment. How do we learn what we learn, and how are our individual projects making an impact? Outreach and informal education may “feel good” but I’d like to know who we’re reaching and how. We’d also like to know how we’re making a difference in the classroom. 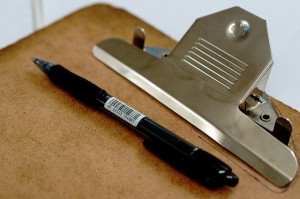 First of all, I had to learn how to work with an Institutional Review Board, or IRB. For the most part I’ve been doing anonymous or pseudonymous surveys with adults, so there’s really not much danger to the participants. Getting our project passed or even waived by the review board was no big deal, but it was still a learning experience for me. I’ve been on the other side of a medical trial when I was a graduate student, but here I was drafting “acknowledgement consent forms” for the first time. As an astronomer, that’s not an issue, generally. Galaxies willingly give up their photons, and I don’t know how one of them would sign a consent form. (Do they use their spiral arms? What about dwarf irregulars then?) I also have to be very mindful of protocol. Not that you can be a slacker when you’re doing astronomy, but at least there in many cases the settings of your telescope are saved somewhere and calibration can be done carefully after the fact. (That said, I HAVE had screwed up data sets to throw out when something was missing. Sigh.)

A few months back, you may recall our asking (begging) for you to complete an online survey about CosmoQuest. A whole bunch of you replied, so thank you! We were primarily interested in studying motivations for engaging in citizen science, and secondarily to get a feel for the population of CosmoQuest users. We don’t ask for identifying information beyond an email address when you sign up, so we have to ask who you are! I presented the results of this survey at the meeting of the Astronomical Society of the Pacific back in July (and preliminary results in June at American Astronomical Society). Since the survey is over and I’ve submitted a conference proceeding on the subject, I’d like to share some results. 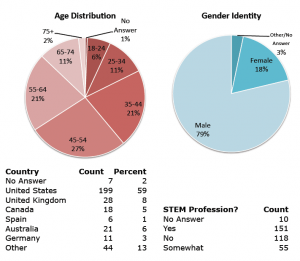 This survey, of course, is just a small sample of users that we hope is representative of the entire population. There’s surely a bias towards people who don’t mind answering surveys, or those who happened to log in to CosmoQuest during the survey period in May and June. Of our survey participants, 79% identified as male. Which leads me to ask, where the ladies at?! Okay, that’s not necessarily a well formulated research question, but as a female astronomer and a feminist, I’d love to have just as many women join us as there have been men. What is the reason behind such a disparity? This survey wasn’t designed to ask that question, but it is something to keep in mind for the future, especially since CosmoQuest’s core staff is overwhelmingly women.

Our survey participants also differ from the last US Census in that our distribution tends to be older and have had more years of formal education. And, almost half of our respondents said they worked in a STEM-related field. (Kudos to you who want to do science with us after doing something STEM all day at work!) Of course, using US Census data to compare isn’t quite correct, since our respondents hailed from thirty-one different countries. I now know more about country abbreviation codes than I EVER WANTED TO KNOW.

How do you CosmoQuest? 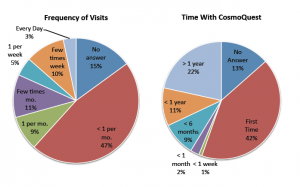 Yes, CosmoQuest is a verb now. Here is something I didn’t necessarily expect: 42% of our respondents were on the site for the first time. So thanks for filling out a survey even though you just got here! I realize some of that may have come from our social media request for survey takers, but I still hope you all stayed and found something interesting. The next largest group, at 22%, had been on CosmoQuest for over a year. Since this survey was administered in mid-2013 and the project started early 2012, that means you’ve been with us from the beginning. That’s great! Overall, nearly half of respondents that actually took part in the citizen projects, such as Moon Mappers, tried more than one. The forum and Hangouts on Air were the next most popular parts of the website.

To further delve into what these numbers mean, I’d like to correlate some of these questions with each other, that is, see if length of time on site is at all correlated with how often one visits. But, the raw numbers for these are presented. Considering that many citizen science projects have large drop-off rates after the initial excitement, we’re pleased to see that there are quite a few of you sticking around to be a part of this community.

Why do you CosmoQuest?

The heart of the survey was to determine various motivations for citizen science participation. I already had a great place to start from, since a paper by Raddick et al. (2010) identified many such motivations from interviews with Galaxy Zoo participants. So, we asked you to give us your primary motivation and to rate the importance of all of the given motivations. The big winners were the statements, “I am excited to contribute to scientific research” and “I am interested in astronomy/space science.” This is consistent with a more recent paper by Raddick et al. (2013) that has “contributing to scientific research” as the winning motivation. (Interestingly, their survey participants are also ~80% male.)

We did find, however, that a number of you came to CosmoQuest primarily for some kind of teaching (4%) or learning (4%) purpose, and that’s fantastic. We’d hoped that you could come to CosmoQuest to learn about science as well as do science, and that is reflected in our weekly Hangouts on Air. And, though our curricular offerings are small to start with, we’re working hard to make such materials available, especially if you want to use CosmoQuest in the classroom. 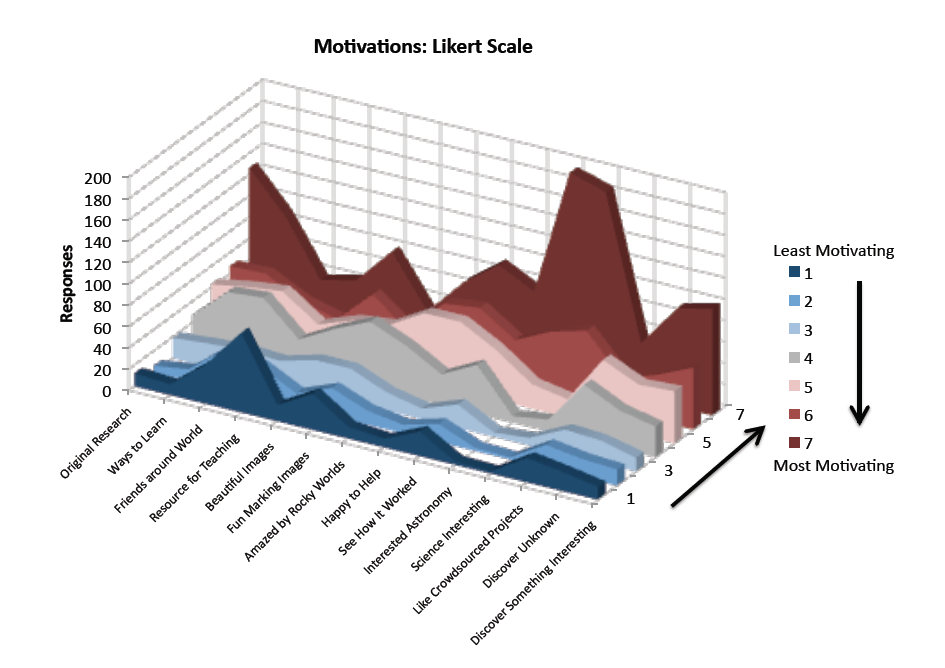 Feel free to peruse the entire poster as a pdf here. I also took a look at respondents’ attitudes towards science and participation in other astronomy-related activities. There is even more data that didn’t make the poster, but will come out as a publication once I finish wrangling the data in between the day-to-day operations around here.

We’d like to sit down with and talk to you more in depth about how you use CosmoQuest. We haven’t hammered out the details just yet, but this research will include an interview portion. We also did some anonymous surveys with people who came to our booth at Dragon*Con, and that’ll be used to improve our “in-person” citizen science experience. We’ve also been brainstorming some ways to improve astronomy learning in the classroom, but that’s a project that still needs funding for the moment.

There is a lot to do and a lot to learn, so thank you for participating if you did, and look for future calls for volunteers to come!

At that very same meeting, I gave a brief overview talk on the status of CosmoQuest and Georgia Bracey talked about developing resources for educators.