When the fire comes…

Australia, the land of drought and flooding rains, the driest continent on earth, and home to astronomers who are amongst the most brilliant and respected scientists on the world stage.

The Australian bush is both stunning, rugged, and peaceful, yet harsh and merciless at times …….. when the fire comes – you need to know exactly what to do. The Australian bush is famous for its eucalyptus trees, which aside from feeding our famous koalas, provide a stunning expanse of shade and shelter to many species and us humans as well.

When a bush fire gets big enough to “crown”, that is, travel through the tops of the trees, exploding and burning the eucalyptus oil in the leaves, its like hell on earth. In February 2009, in the State of Victoria, the tributaries of molten alloys (formerly car wheels) running down the hill away from burnt out cars attested to how hot these bushfires can get. 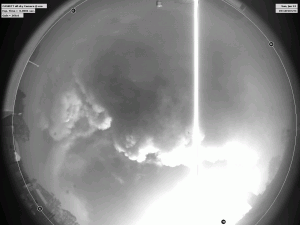 At around 3:30pm on 13th Jan 2013, lightening strikes in the Warrumbungle Ranges ignited a fire in the tinderbox conditions, the Astronomers and staff at Siding Spring Observatory, already on alert, were immediately evacuated. It is a 20 minute drive down the hill to Coonabarrabran and by 5pm the fire had covered 20 klms and crossed the mountain at Siding Spring Observatory (SSO). In a near flawless execution of the fire plan, everyone made it off the mountain safely.

In a surreal experience, the Astronomers then watched in stunned amazement via their smartphones, the all-sky web cams, their temperature sensors, and their all-sky inferometers, as the fire front swept over the mountain. The outside temperature near the 4m Telescope spiked to 110 degrees Celsius for a brief period of about 90 secs as a 130 klm per hour gust blew the fire front through, starting many spot fires that then burnt on into the night.

This fire will be carefully studied by authorities because of the incredible data captured by the Astronomer’s instruments on the mountain. Seeing the double spike of wet conditions in the all-sky inferometer when the fire fighting helicopters dumped the water on the roof of one of the observatories was just one of the amazing events captured. This bushfire has data like no other. 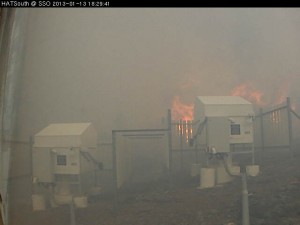 Fresh in the mind was the devastation of the Mt Stromlo Observatory in a terrible fire in Canberra in 2003, 10 years previously, almost to the day. Yet the lessons learned from that fire along with the amazing firefighters, almost certainly saved the mountain from utter devastation. Sadly the staff quarters and some out buildings have been lost, but the observatory structures are intact, although there has been little opportunity to assess smoke and heat damage yet, internal temperature feeds seem to indicate that most instrumentation remained within their heat tolerance specifications.

The new iTelescope.net observatory, completed only two weeks ago, built with fire resistant walls of freezer room panels incredibly had an internal temperature of only 28 degrees Celsius. Every building on the mountain had ember guards over their windows made from Crim-safe steel mesh, every observatory was painted in fire resistant material, and the grounds were open and clear, with a regular fuel reduction strategy in the winter – all part of the mitigation of the risk and based on the lessons learned from the 2003 fire at Mt Stromlo.

The steps taken by the Australian National University (ANU), to protect the site, when faced with their worst nightmare scenario will also be studied by observatories around the world along with the amazing data feeds of all the live instrumentation. The site is Australia’s largest Astronomy outfit with seven separate observatories and a number of new arrivals expected this year. Such is the face of modern astronomy, its not only what you can do with your own instruments, its what you have to trade with other observatories, and universities. Siding Spring doesn’t have a scope with an 8m mirror, but it does have a highly sought after spectrograph on the 4m instrument, which allows the Australian Astronomical Observatory (AAO) & the ANU to develop partnerships with other observatories who happily trade their “wares”. 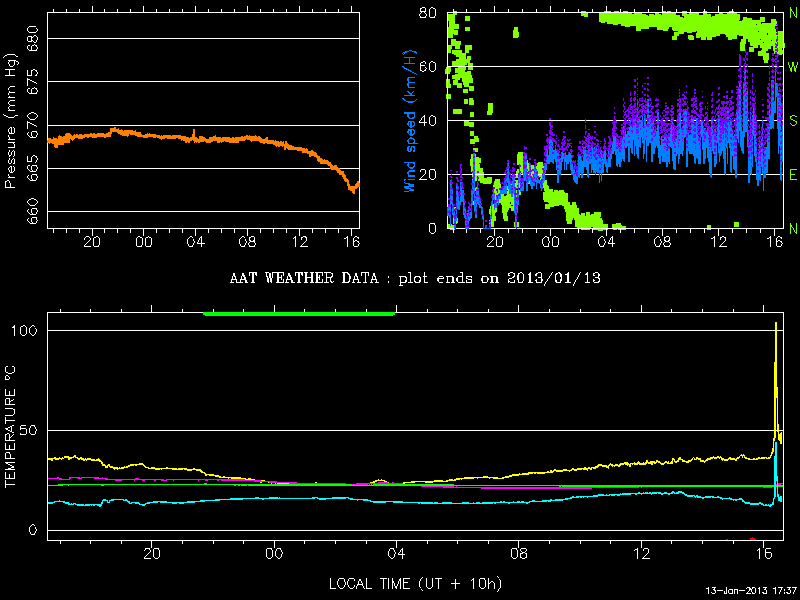 To the average person in the street the question might be asked, why would you build an observatory in such a fire prone area on top of a mountain? The site is 1100 meters above sea level with dry air and one of the darkest night skies in the world, which happens to be Siding Spring’s best value proposition when it comes to site selection for the various Universities of the world.

On a lighter note, one lesson sure to be learned from this fire, by an un-named observatory manager  – don’t leave a bag of prawns (shrimp) defrosting in your kitchen sink during an evacuation, we’ll find out in about three days if the cottage is still inhabitable! Yet across the continent of Australia today, many hundreds of thousands of people have their fire plans primed and ready, fresh in the face of these confronting images, they must be ready …… not if….. but when the fire comes.

So on this difficult day …. here’s a big shout out to the people who hunt the asteroids, those who study the stars and the galaxies and help us learn more, and those who have suffered loss of their homes and personal effects in the surrounding area. We are thinking of you all and your stunning surroundings which will blossom again with the green and the gold. 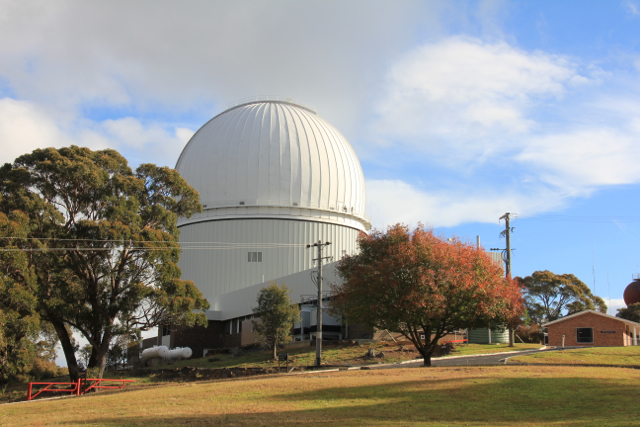