← A Million Craters Marked, Some Basic Stats Carnival of Space at StarryCritters → 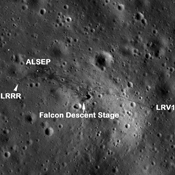 Over the past weekend, CosmoQuest hit 1 million craters marked across all science interfaces, and I wrote a post about some of the basic stats about you, our volunteers. MoonMappers itself is at about 910,000 craters as I write this (the balance being done in the AsteroidMappers task). So with stats now out of the way, where are we with the science?

First, what science are we trying to do? This tutorial page goes into a fair bit of detail, but briefly, we’re using small craters on the Moon (around 10 meters to 1 km across — that’s about 13 ft to 0.6 miles) to better understand the chronology (what happened when?) and the details about how we actually identify craters in the first place.

To do this, we ask you to identify craters. Simple as that, right?

Not quite — we don’t just have you look at an image and then that’s it. We aim to have 15 different people look at every small, 450 by 450 pixel sub-image, each sub-image being part of a larger image taken by the Lunar Reconnaissance Orbiter Camera (“LROC”). All that you see is the individual images, and the number of craters that everyone has marked.

At the moment, we have 15 different “master images” that cover the Apollo 15 landing site that we’ve divided into the sub-imagees that we’re trying to have fully marked up. Of those 15 images, I’ve already identified the craters in one, and we’re using that as calibration to see how my craters compare with all of yours’.

Of those 15 images, all but 1 have at least been looked at a little bit by some people. 6 of those 15 have been completely finished: An average of 15 to 18.4 people have looked at each sub-image that makes them up. One of the remaining is half-way done with just over 8 people having looked at each sub-image. Another has 4 people per sub-image, while the remaining are under 3. So in the end, we’re around half-way through this initial science question at the Apollo 15 landing site.

We’re also nearly ready to submit our first paper — how we actually go from each of your individual markings to a “consensus crater.” But that’s a different blog post.