(Special thanks to WSH Crew member Bill Wink for researching the data on these instruments!) 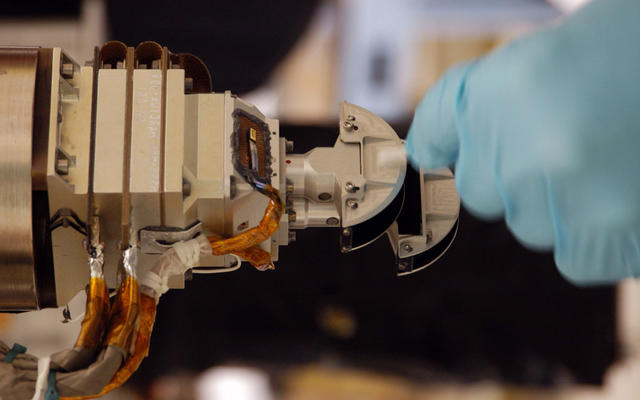 The Principal Investigator (lead scientist) is Mike Malin from Malin Space Science Systems.
The Mars Color Imager (MARCI) is designed to acquire daily global images of Mars for at least 1 Martian year (687 Earth days) at 5 visible wavelengths and 2 ultraviolet wavelengths. MARCI images will be used to document the weather on Mars by observing the comings and goings of dust storms, polar frost, and clouds of water vapor, water ice, and carbon dioxide crystals. MARCI’s ultraviolet observations will map the distribution of water vapor and ozone in the atmosphere.i1

On each orbit that MRO makes around Mars, MARCI simultaneously acquires 7 pictures at 7 different wavelengths. Over the course of a day, MRO makes 12 to nearly 13 orbits around Mars. The 12 times 7 pictures per day (84 images) provide a daily record of meteorologic events that have occurred on the planet. By building up these images every day for an entire martian year, MARCI will provide a record that spans through winter, spring, summer, and autumn in both martian hemispheres.2

The table, below, shows the wavelengths of each MARCI image. In addition to their utility in observing ozone and discriminating between clouds of dust, water vapor, water ice, and carbon dioxide, these images can also track the changes in brightness of the Martian surface; monitor the growth and retreat of the polar caps, and aid in identification of iron-bearing minerals.

Looking straight down (nadir orientation) at Mars, MARCI images are designed to have spatial resolutions in the 1 to 10 kilometers per pixel range. The system consists of two separate sets of lenses and detectors–one for the visible light images, and one for the ultraviolet images. Both systems have a 180° field of view lens, which permits all of Mars to be in view, even when MRO rolls up to 20° off nadir for imaging specific targets with its other instruments. Each MARCI image is about 1000 pixels wide and can be many thousands of pixels long, depending on the objective of the image.
A very cool website is here – http://www.msss.com/msss_images/latest_weather.html – it is the weather for Mars the past week. It is a GIF of the planet rotating and pictures of how the weather changes.

The data below is much more technical…
MARCI is a seven-channel multispectral camera that can take images in seven different colors from the ultraviolet to the near infrared, all housed in a package weighing less than 400 grams. Its small size, however, comes at a cost of requiring more image processing. MARCI has a single CCD image sensor with seven color filters bonded to it. As a result, each image that MARCI takes has seven areas, each of which views a different portion of the scene through a different filter. So a typical frame looks like this:

The above picture is from the first MARCI image taken in orbit around Mars during an instrument check-out in March 2006. Because of the low signal levels in the ultraviolet (UV), the two UV channels are exposed independently of the five visible/near-IR channels, are summed 8×8, and are processed separately. The UV images are not shown in the examples on this page.

These bands are curved because the MARCI uses an extremely wide (180°) angle (“fisheye”) lens that greatly distorts what it is viewing.

In the normal mapping orbit that will begin when the MRO spacecraft completes aerobraking in the later in 2006, a frame is taken when the spacecraft has moved far enough along its orbit so the scene has moved by about the height of one filter strip; this takes about 3.2 seconds. For the post Mars Orbit Insertion image, shown here, MARCI was also taking a frame at this rate, but the motion was much slower, especially at the start of the image sequence. This allows us to make a 15.6 MByte animated GIF movie of the planet as MRO moved southward. To view this movie, it is best to download it so that the file is local on your computer. Be patient while watching it, because at first it appears nothing is happening and that it is a still image. But slowly, you’ll notice the planet is getting bigger and that craters are moving from one band to the next.

During this sequence, the spacecraft was moving south towards the bottom of the image, and the sun was to the right, with the morning terminator (the sunrise line) near the center of the image. The time of day is just before 8 AM Local Solar Time.

To make color maps from these frames, more processing is required. First, each individual 16-pixel-high strip of the frame looking through a specific filter (which we call a “framelet”) is extracted and map-projected. In the figure below, we have separated the images so you can see them as individual framelets, in reality, they overlap.

If we take all of these strips and mosaic them together, we produce a map in one color of the entire scene 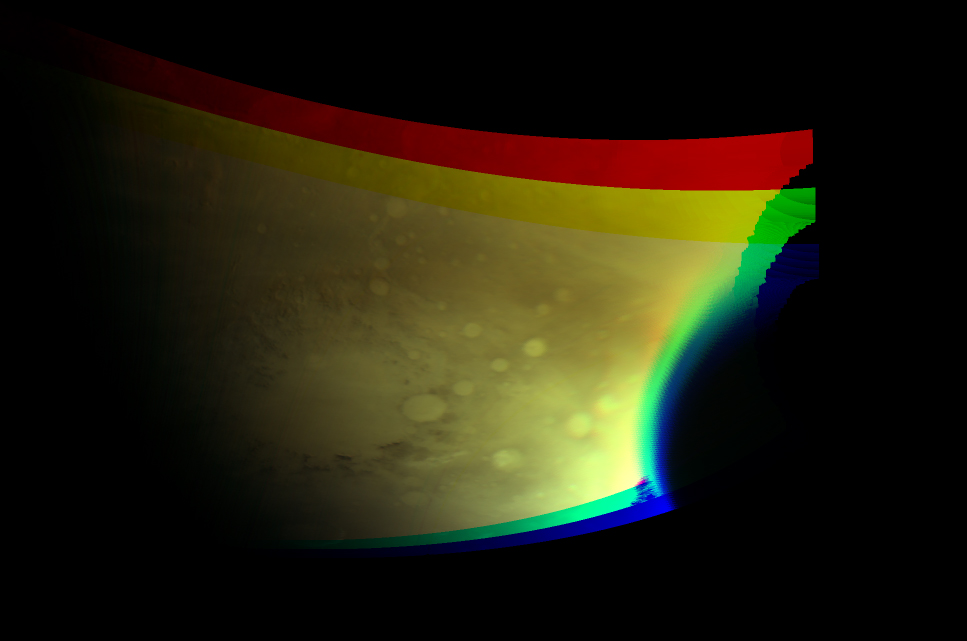 Note that these images have not yet been calibrated for “true color” (for example, the green channel is proportionally more sensitive and brighter than the red and blue channels), and residual errors in the geometric mapping of the MARCI fisheye lens result in slight feature mismatches, especially near the limb of the planet (the edge between the bright planet and dark space).3