There are two ways that lighting conditions can change:

Both of them effect how craters and other features on the surface look, but in different ways.

In general, the sun rises near the horizon on one side of a planet’s surface, moves up until it is directly overhead, and then moves down until it sets on the other horizon. So, the angle that the sun shines on the surface changes during the course of a planet’s “day”. When the sun is close to the horizon, the sun angle is very low, casting long shadows. During the planet’s “mid-morning” or “mid-afternoon”, the sun angle is mid-height (about 45 degrees above the horizon), casting intermediate shadows. And at local “noon”, the sun is directly overhead (90 degrees), and casts no shadows.

Scientists think that how big a crater looks can depend on sun angle. At Moon Mappers, we are testing that theory, and also trying to determine which sun angle is the best for measuring crater diameters. We have found several images that show the same area, but at different sun angles. And we are using these to try to answer these questions. For more information on this part of our research, check out our:

Everyone knows that the sun rises in the east and sets in the west, right? But, this is only true if you are on the equator of a planet with no tilt. Go far enough north, and the sun will rise in the south-east and set in the south-west (or north-east and north-west if you are in the southern hemisphere). And if you are on a planet whose rotation axis is tilted, this gets even more complex, with the direction of the rising and setting sun changing with the seasons (which is what we have on Earth). This means that the illumination direction, or where the sun is shining from, can vary all over the compass.

This is a concern for planetary scientists, because the illumination direction turns out to be an important factor in how we humans interpret surface features. Basically, we use shadows to figure out what’s a hill and what’s a depression. When light shines on a hill, the other side will be in shadow. But, when the light shines on a depression, the opposite side will be illuminated. To know if we are looking at a hill or depression, we need to know which direction the light is coming from. This is very important, because if the sun is shining from the south-east, but we think it’s coming from the north-west, hills will look like depressions and vice-versa. 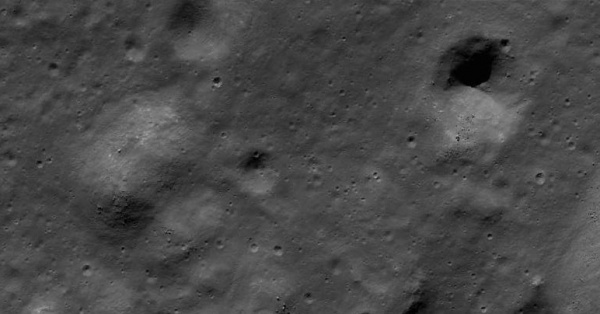 To address this, the Moon Mappers task interfaces use a little sun symbol to tell you the illumination direction, or where the sun is shining from. Use the information from this symbol to help you figure out if you are looking at a hill or a depression.

Because of a quirk of convenience and culture, many people’s brains are trained to interpret features as if they are being illuminated from the top an image. This is great when we look at an image where the sun is shining from somewhere in the top half of the image. However, this is not so great when the illumination is from the bottom. 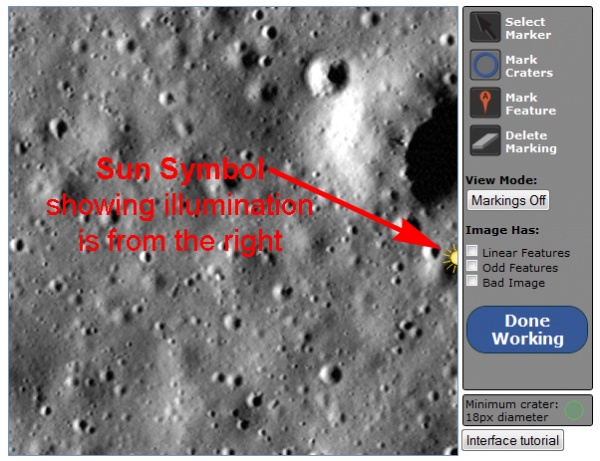 For more information about this topic, read our blog on the subject.

Back to Moon Mappers Home.