Got a question? We just might have an answer for you below.

We are working to collect the most frequently asked questions from the forum, blog comments, and your emails all in one place so it is easier for you to find answers and see what others are wondering about.

Why am I identifying craters?

Craters can tell planetary scientists a lot about a surface, such as its age, how thick the regolith is (moon “soil”), what kinds of erosion processes may have occurred, and what kind of material may be just under the surface.

To study all these things, we need to know where impact craters are, how many there are, and different things about them. This gives us the basic task of CosmoQuest Moon Mappers: Find craters!

Project scientists are also interested in different kinds of impact craters, especially bright-rayed and dark-rayed ones. Bright ray craters usually indicate a relatively young crater. Dark rayed craters can indicate that the crater punched through the upper surface to expose buried lavas. All of these are useful to scientists who study the moon.

These are just a few of the reasons that we’re asking you to help us identify craters on the moon. 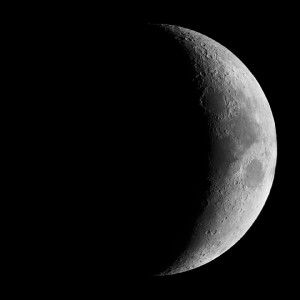 CosmoQuest Moon Mappers is launching with the goal of determining how best to get good science for the project scientists. To do this, we need to answer a debate that has existed for decades: A major part of identifying craters is selecting the right images to study. You may be surprised, but even after centuries of cataloging craters on the moon, and decades of doing it on other planets and moons, scientists still don’t know what the best sun angle is to identify craters, or if there are other biases that are dependent upon angle.

In the images to the right, you can see that the crescent moon shows a lot of craters near the terminator (line between day and night). This is because the long shadows (low sun angle) make topographic features – like craters – more visible. Compare this with the image of the full moon and it’s much more difficult to find craters there. But, in the full moon image, other kinds of features are much more easily visible, such as bright crater rays and ejecta blankets. 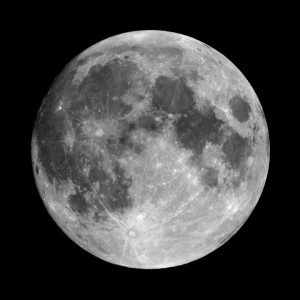 These questions that we’re trying to answer will both help the planetary science community understand these effects better, and it will let project scientists better select images for future science projects with CosmoQuest Moon Mappers.

Why do some of the images have long shadows and others hardly have any?

One of the early science questions we’re trying to answer is, what are the effects of sun angle on crater identification? To study this, we need to try to identify craters in the same area at different sun angles. The higher the sun is overhead (high sun angle), the shorter the shadows are going to be. The lower the sun is on the horizon (low sun angle), the longer the shadows are going to be.

I’ve found lots of things at the Apollo 15 landing site. What are they? 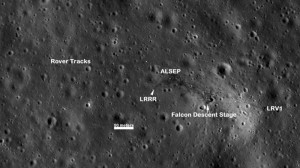 Mission landing sites are very neat areas to explore, and you can find a lot of hardware that was left, from landers to rovers and footpaths to experiments. In the annotated image below, we have identified most of what you can see at the Apollo 15 site.

You can explore this whole image yourself by going here, though it may be hard to find it — the moon is a big place! (Hint: Look near the bottom.)

I think I’ve found something weird or interesting. What do I do?

If you want to call attention to a feature, use the marking tool in the interface to flag it (see image on the right). This will record it for the CosmoQuest Moon Mapper scientists to look at.

How do I know if I’m doing anything right? Why can’t I go back and change things?

We make it so that you can’t go back and change your markings once you’ve submitted an image – you’d be spending all your time fine-tuning past results and not moving on to new ones.

The point of crowd-sourcing like this is to have tens of thousands of people looking at everything to get a consensus result, and your marking that may have been 1 pixel off from the average isn’t going to prevent us from getting good science in the long run. In fact, the analysis of Moon Mappers results from our first year show that to be the case!

We also periodically check how every user is doing. At random intervals, a standardized image will appear for you to do. It won’t be marked in any special way, but CosmoQuest Moon Mapper scientists have already identified the craters in it. Once you’ve completed that image and submitted it, we check how you did against the experts.

When we check, we look at how well the crater centers and diameters compare. We then assign a score. We’ll show you both the score and the way the experts identified craters in that image. If the score is low, we’ll ask you to do a second standardized image – we all have bad days. If the second one is low, we’ll ask you to annotate some images where we guide you through.

I don’t see any craters, all I see are hills.

Human perception is an interesting thing and it’s a bit different for everyone. We’ve tried to rotate the images so most people will see craters, not hills. If all you see are hills, a quick way to change it is to invert your screen’s colors if you are on a Mac or Windows computer.

Mac: Press CTRL+OPT+CMD+8. This will invert the colors on your screen. Press the key combination again to put them back to normal. You can also go to your System Preferences, choose “Accessibility”, then “Display.” Check “Invert colors” to invert; uncheck to return to normal.

Windows XP: Go to “Help and Support.” Type in “High Contrast”. Under “Pick a Task” choose “Turn on High Contrast”. Click where it says “Accessibility Options”. Check “use high contrast and click Settings. Select the contrast scheme that inverts the colors, press “OK,” then “Apply”.

Windows Vista: Press ALT+Shift+PRNTSC (or “Prnt Scrn” or “Print Screen”). This will bring up the High Contrast window. Click “Yes”. This should invert your colors. Follow the same method to return them to normal.

Windows 7: Click on the Start menu. Type “Magnifier” in the search box. Click on the magnifier application and open it. Click on the grey gear to open the Preferences. Click the check box next to the “Turn on color inversion” to invert the colors on your screen. Follow the same steps (but uncheck the box) to return the screen to normal.

Why do some of the images have wavy or straight black borders?

When the Lunar Reconnaissance Orbiter takes pictures of the moon’s surface, it’s not the same as taking out your digital camera and taking a photo of a tree or your room. Scientists are very specific when they take photographs of a planet’s or moon’s surface, and there are a lot of things they correct for.

One of those is the projection. Let’s say you take a photograph that covers half of your kitchen sink. On the edge of the photograph you have the basin of the sink, and the edge is straight. But, if you were to make a grid in your kitchen and map out exactly where that basin should be, it will be in a different place in the photo you take.

When we process the LRO images, we correct for these things. There aren’t any kitchen sinks on the moon, but there are valleys and hills, craters, and volcanic rises. When the LRO takes pictures of these, scientists want to know exactly where they are on a precise latitude and longitude grid on the moon. To do this, we need to correct for topographic features.

When we do this, the images are no longer perfect rectangles. They’re stretched and rotated. And, if part of the image goes over a significant topographic feature, then it’s warped in the processing to correct for that change in elevation. It makes the images look a bit weird, but it helps us later on when we want to map things.

Back to Moon Mappers Home.