(Special thanks to WSH Crew member Bill Wink for researching the data on these instruments!)

The images used in Moon Mappers were taken by the NASA’s Lunar Reconnaissance Orbiter. Here are the technical specifications for the instruments on the LRO.

Lunar Reconnaissance Orbital Camera consists of two Narrow Angle Cameras (NACs) that are designed to iprovide 0.5 meter-scale panchromatic images over a 5 km swath, and a Wide Angle Camera (WAC) that provides images at a scale of 100 meters/pixel in seven color bands over a 60 km swath. The Sequence and Compressor System (SCS) supports data acquisition for both cameras. 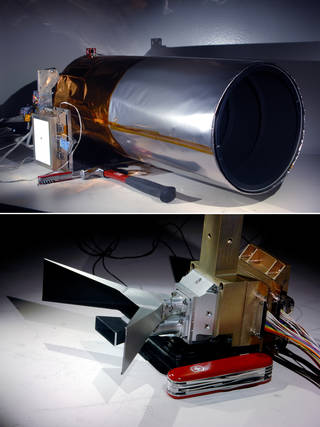 Two narrow-angle cameras on the Lunar Reconnaissance Orbiter Camera (LROC) will make high-resolution, black-and-white images of the surface, capturing images of the poles with resolutions down to 1 meter (about 3.3 feet). A third, wide-angle camera(WAC), will take color and ultraviolet images over the complete lunar surface at 100-meter (almost 330-foot) resolution. These images will show polar lighting conditions, identify potential resources and hazards, and aid selection of safe landing sites. The Lunar Reconnaissance Orbiter Camera (LROC), developed at Arizona State University in Tempe.

Below are the listed specifications for both cameras.

The Lunar Reconnaissance Orbiter is currently in the Extended Mission phase, focused on collecting the data needed to address key lunar science questions, including:

1. Chronology/Bombardment
Determine bombardment history of the Moon, from the timing of basin-forming events down to small, recent impact events. Measure lunar landforms at 0.5 – 2.0 meter pixel scales for more than 10,000 targeted sites, and measure mineralogical variation of the Moon via ultraviolet-visible observations at sub-kilometer pixel scales over at least 75% of the surface.
2. Crustal Evolution
Investigate geological processes and their role in the evolution of the lunar crust and shallow lithosphere. This investigation includes imaging of landforms at 100m scale down to meter scale for thousands of targeted regions. Obtain oblique (more than 60° emission angle) imaging of key science targets for the purpose of assessing stratigraphy, at 2 meter pixel scales for an average of at least two targeted regions per month. Also, obtain UV/Visible (400 to 100 meter pixel scales) multi-phase angle imaging over at least 90% of the lunar surface and measure mineralogical variations of the Moon via ultraviolet-visible observations at sub-km pixel scale over a minimum of 75% of the lunar surface.
3. Regolith Evolution
Look for evidence of processes that shaped the global lunar regolith as they relate to evolution of the crust, verifying physical characteristics of the upper-most regolith layers via their textures, scattering mechanisms and composition. Measure the surface morphology at 0.5 – 2.0 meter scales, and other physical properties at meter pixel scale for specific targets.
4. Polar Volatiles
Investigate volatile sources, sinks and transfer mechanisms with emphasis on the lunar polar regions, including permanently shadowed regions (PSRs). Measure polar region landforms in PSRs at better than 20 meter horizontal scales. Also, measure reflectivity as a function of phase angle at meter and 100 meter scales near PSRs within 10° of each pole.