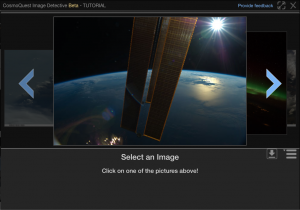 CosmoQuest’s Image Detective, a NASA-funded citizen science project, invites the public to identify Earth features in photographs taken by astronauts from the International Space Station (ISS). Citizen scientists are asked to help identify geographic features (natural or human-made) in astronaut photographs and then determine the location on Earth where the photo is centered. CosmoQuest is led by principal investigator Dr. Pamela L. Gay from the Astronomical Society of the Pacific (ASP).

You can become part of Image Detective by visiting http://cosmoquest.org/ImageDetective.

“The astronauts’ photos of Earth are visually stunning, but more than that, they can be used to study our changing Earth,” says Dr. Gay, the Director of Technology and Citizen Science at the ASP. “From erupting volcanoes, to seasonal flooding, these images document the gradual changes that happen to our landscape. The trick is, we need to make these images searchable, and that means taking the time to sort through, analyze, and label (add metadata) the unidentified images within the database of 1.5 million plus photos.” 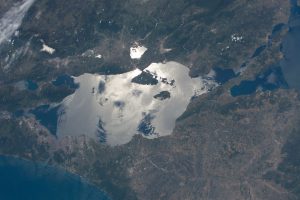 Image Detective lets anyone with an Internet connection advance the usefulness of NASA’s vast catalogue of astronaut imagery. Since construction began in 2000, more than 200 people from 18 nations have visited the International Space Station (ISS). Orbiting just 250 miles above the Earth, this platform provides astronaut photographers an amazing platform for imaging our planet. As part of their day-to-day work on the ISS, astronauts are asked by the ESRS team at Johnson Space Center to take numerous photos of our planet Earth’s land surface, oceans, and atmosphere, including impressive auroral displays. Crews also take images of other solar system bodies, such as the Moon, planets, and stars. These images now need carefully labeled. 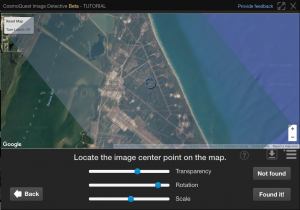 Image Detective spreads the significant work necessary to label all of the images out to citizen scientists across the world. “This is a unique, powerful, and beautiful image data set that has already yielded excellent research science. But the data set needs the many eyes and minds of citizen scientists to reach its full potential as a publicly available, searchable catalog,” said Dr. Jennifer Grier, a Senior Scientist and Senior Education and Communication Specialist at Planetary Science Institute (PSI) and CosmoQuest’s lead support scientist. “With the additions that citizen scientists as detectives can make, professional research scientists will be able to conduct more research into our changing world, and do so much more effectively.” 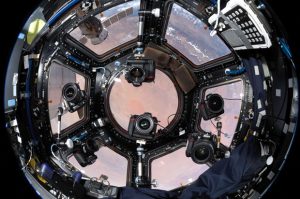 These efforts are supported by NASA under cooperative agreement award number NNX17AD20A. Any opinions, findings, and conclusions or recommendations expressed are those of this project and do not necessarily reflect the views of the National Aeronautics and Space Administration (NASA). Image Detective was produced through a collaboration of the Astronomical Society of the Pacific, the Astromaterials Research and Exploration Science (ARES) Division at the NASA Johnson Space Center, the Planetary Science Institute, Youngstown State University, and Southern Illinois University Edwardsville. NASA’s Gateway to Astronaut Photography of Earth (GAPE), the official online database of more than 1.5 million astronaut images, is curated by the Earth Science and Remote Sensing (ESRS) Unit, within the ARES Division at JSC. Photos used in Image Detective are courtesy of The Earth Science and Remote Sensing Unit and NASA Johnson Space Center. NASA’s official online database of astronaut imagery is available at: https://eol.jsc.nasa.gov.

The Astronomical Society of the Pacific, established in 1889, is a 501(c)3 nonprofit organization whose mission is to use astronomy to increase the understanding and appreciation of science and to advance science and science literacy. The ASP connects scientists, educators, amateur astronomers and the public together to learn about astronomical research, improve astronomy education, and share resources that engage learners of all kinds in the excitement and adventure of scientific discovery. In addition to CosmoQuest, current ASP programs and initiatives support college faculty, K-12 science teachers, amateur astronomy clubs, science museums, libraries, park rangers, and girl scouts to name a few.