Through MoonMappers, the public is offered a chance to be part of NASA Lunar Science

The MoonMappers citizen science project at CosmoQuest.org invites the public to become part of the Lunar Reconnaissance Orbiter’s science team. Through this project, the public is invited to explore high-resolution Lunar images and map out scientifically interesting features. People can get engaged at http://cosmoquest.org/projects/moon_mappers/.

The focus of MoonMappers is two-fold: to determine the most effective way to map craters on the moon, and to use those maps to define areas for follow-up study. 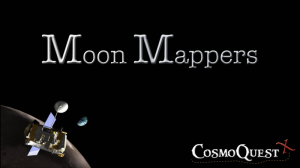 “Craters can reveal all sorts of different properties about the Moon and planetary surfaces in general,” says project co-science lead Stuart Robbins (Southwest Research Institute, Boulder). Key features include, “Ages of different regions, historic spikes in the impact rate, lunar regolith depth, what may lie under the crust, and the physics of giant explosions on a planetary surface.”

Right now, community members can either map craters for themselves on “Simply Craters” or correct the results of automated crater finding software in “Man versus Machine”. Just as computers struggle to identify faces in photos, they also struggle to identify craters in Moon images, and the results are often only 70% correct. By looking at how quickly and accurately users can map craters – on their own or partnered with the machine –in different terrains and under different conditions, this project will determine how to most effectively map the Moon.

Launched as a beta-project on January 9, 2012, MoonMappers has been put through its paces, and team scientists have demonstrated that everyday people are successfully marking craters. In preliminary data, citizen scientists found 94% of the craters identified by scientists in a test region. With more eyes, and more people confirming one another’s results, this accuracy is expected to improve.

“I love the enthusiasm of our citizen scientists,” says co-science lead Irene Antonenko (Planetary Institute of Toronto). “They are some of the most inquisitive and dedicated people I have ever met.” During its beta testing period, early participants marked over 150,000 craters and more than 4,000 other interesting features.

Designed and programmed at Southern Illinois University Edwardsville, MoonMappers is the first in a series of Solar System science projects that will go into CosmoQuest. According to lead programmer, Cory Lehan, “We’ve developed flexible software that allows community members to go from discovering asteroids to exploring the Moon with ease. I can’t wait to share what we have in the pipeline for the coming months.”

While still undergoing rapid development, it is expected this software will be made available to the open source community over the summer. “We want scientists to take our tools for exploring space, and redeploy them to explore under the seas, and everywhere else an image can be taken,” says CosmoQuest project director Pamela L. Gay (Southern Illinois University Edwardsville).

MoonMappers is the first citizen science project launched by the new CosmoQuest online astronomy community. This new virtual science facility strives to bring to the public experiences often restricted to the hallways of traditional research centers. The goal is to bring together the public, scientists, programmers, and educators who together will explore our Universe and contribute to science.

According to Antonenko, “CosmoQuest is this amazing union of scientists, programmers, and citizens, each bringing their best to the partnership.”

From weekly seminars by professional scientists and engineers, to social gatherings, to scientific research, CosmoQuest offers its community members a myriad of programs. “Our goal is to create a community of people bent on together advancing our understanding of the universe; a community of people who are learning and doing science together,” says Gay. “We’re just getting started.”

Editor’s Note: CosmoQuest is a production of the STEM Center at Southern Illinois University Edwardsville and Astrosphere New Media in association with Universe Today, Bad Astronomy, & numerous partner organizations. Funding for MoonMappers is provided through awards made to SIUE via NASA grant #NNX09AD34G and from the NASA Lunar Reconnaissance Orbiter, and to SWRI from the Maryland Space Grant Consortium via the NASA Lunar Science Institute.