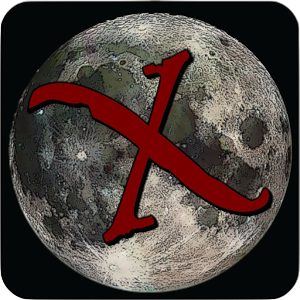 A team of scientists working with the CosmoQuest virtual research facility (CosmoQuest.org) has demonstrated that it is possible for everyday people to map the Moon with the same quality as a group of experienced professionals. These crowd-sourced results are being published in the journal Icarus and highlight the ability of citizen scientists to advance planetary research. CosmoQuest is a second-generation citizen science site run out of Southern Illinois University Edwardsville (SIUE) by Dr Pamela L. Gay.

While “crowdsourcing science” may sound like they are handing out lab sets and white coats, CosmoQuest has actually done something much more impactful.

They handed over the moon.

CosmoQuest’s MoonMappers research portal invites the public to learn about the lunar surface and aid professional researchers in mapping craters and other features on the Moon. MoonMappers is led by researchers Stuart Robbins (University of Colorado – Boulder) and Irene Antonenko (the Planetary Institute of Toronto). CosmoQuest community members are the first citizen scientists to demonstrate volunteers’ ability to accurately identify planetary surface features.

With over 500 million craters on the moon alone, and new data coming in from NASA’s Lunar Reconnaissance Orbiter daily, there is quite a lot of science to be furthered.

According to Gay, the role of citizen science and scientists is clear. “These volunteers can accomplish many of the same tasks as students and professionals, but exist in larger numbers.” Today, as shrinking funding dollars reduce the number of professional positions, the need for this help is greater than ever before. “CosmoQuest allows passionate volunteers and professional scientists to effectively explore our solar system together and accomplish science that might otherwise never be done.”

In a statistical comparison between the results of eight professional crater counters, and MoonMapper’s cadre of amateur counters from around the world, it was shown that the combined results are consistent across both groups, even across varied types of craters. This study also showed that the variation in counts between different professionals could be as much as 35%, while there was a 1 to 1 relationship between the combined professional counts and the citizen scientist counts. 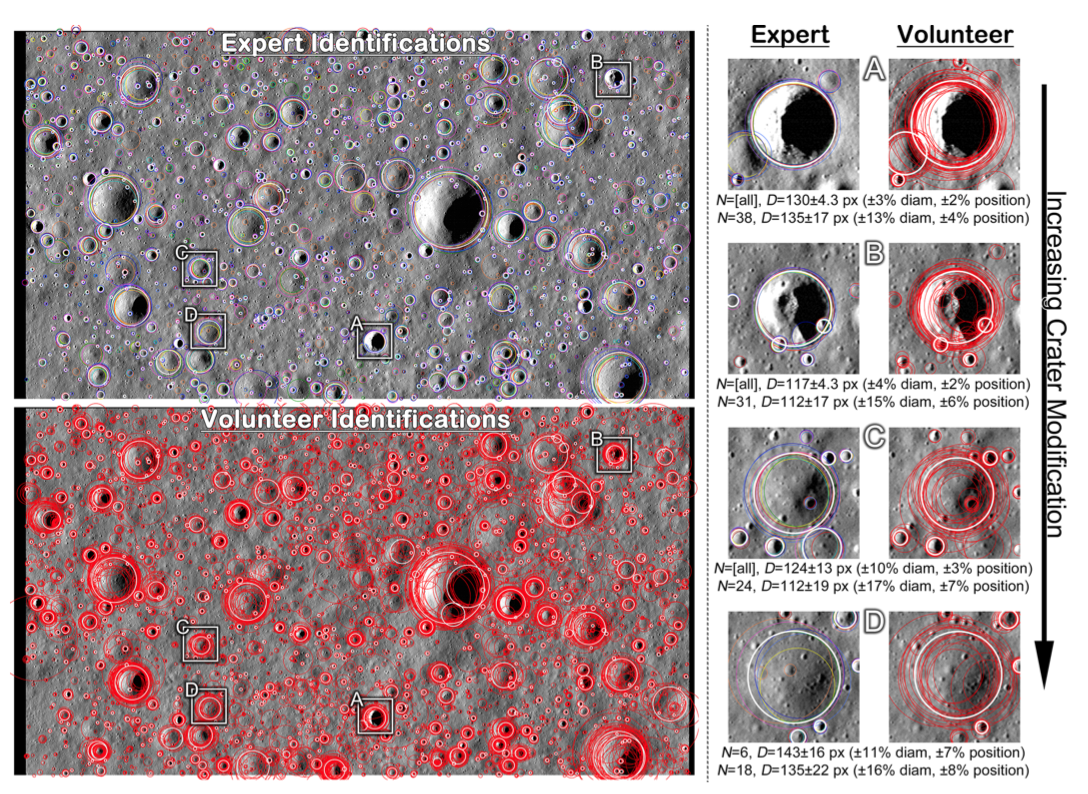 Left two panels are the full NAC areas analyzed in this study with markings overlaid. Top image shows expert markings, bottom shows volunteer data. Color circles are the individual markerings and the white, thicker circles are results from a clustering algorithm. On the right side, four example craters are shown in detail with expert markings (left) and volunteer data (right); the craters are in order of increasing modification / degradation. Captioned below each pair is the number (N) of persons who marked that crater and
the mean diameter (D) with standard deviation. Values in parentheses are relative standard deviations. (Click to see enlarged version.)

“The results from the study were very reassuring to us,” said Robbins, the study’s lead author. “Without this first step of verifying the accuracy of volunteer crater counters, there would be no point in continuing the project.  Our study results mean we can now use the power of crowd-sourcing to gather more data than we ever thought possible before.”

This means willing volunteers can meaningfully contribute to science any time they feel like sitting down and marking a few features. Waiting for the bus? Sitting in the doctor’s office?  Or, “Even do it at night while watching television,” is Robbins’ advice to help further humankind’s knowledge of these objects’ history.

While mapping the Moon is a goal unto itself, there is actually a lot of science tied in with mapping all these divots on the lunar surface.

According to Gay, “Throughout our Solar System’s existence, a steady stream of objects – asteroids and comets mostly – have rained down on the Earth and our Moon. While it may seem these objects are out to kill life on Earth (and they certainly killed the dinosaurs!), they also offer us a chance to understand our history. When we see an area of the Moon that is smoother, we know something has erased the craters, but when we see a very cratered region, we know we are seeing an old surface that holds a record of past collisions.”

Given the Moon’s lack of tectonic activity, recent volcanism, and atmospheric erosion, past impacts have escaped destruction and are still plain to see on the surface in all shapes and sizes. Since its launch in 2009, NASA’s Lunar Reconnaissance Orbiter imaged these and other features in such high resolution that a professional basketball player making a ‘snow’ angel on the Moon might appear as a just visible smudge. MoonMappers uses these images to build maps of all craters roughly 35 feet across and larger.

CosmoQuest is directed by SIUE Assistant Research Professor Pamela L. Gay, and is designed to provide the public with an online experience paralleling that which a professional might have at a research center. In addition to hosting MoonMappers and two other citizen science projects, CosmoQuest also offers online classes, provides multiple weekly seminars using Google’s Hangout-on-Air technology, has materials for teachers, and is home to the Virtual Star Party series. This second-generation citizen science site goes from asking people to click through images to asking them to learn what it takes to become an active collaborator.

“As early as the 1800’s, top researchers, such as Harvard’s Edward Pickering, realized the field of astronomy could advance faster by engaging amateur astronomers in collecting data for professional researchers,” says Gay. Utilizing the global community of amateur researchers that CosmoQuest has drawn together, research can happen more quickly, more accurately, and more often than ever before.

The evidence is piling up in favor of citizen scientists, and no one seems to be complaining.

“Put simply,” says Gay, “the sky is large, and astronomers need all the help the public can offer!”