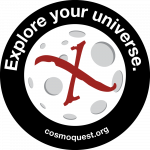 The CosmoQuest Citizen Science facility (cosmoquest.org) released a major update to its Mappers software. This software previously demonstrated that everyday people can map craters as effectively as a group of professionals. With version 2.0, CosmoQuest invites the public to use their skills to answer new science questions related to Mars and Mercury. The public can use their eyes, minds, and time to help determine the ages of valley systems on Mars and determine Mercury’s geologic past.

CosmoQuest’s Mappers software is produced at the Astronomical Society of the Pacific under the principal investigator Dr. Pamela L. Gay. The science teams for Mars Mappers and Mercury Mappers are both lead by Dr. Stuart Robbins of the Southwest Research Institute.

Understanding the timing of events on a planet is one of the most important parts of studying other bodies in the solar system. Impact craters provide, in most cases, the only metric available to modeling the age of different parts of planetary surfaces. As asteroids and comets slowly rain down on planets, the number of craters on that surface increases. These impacts are generally randomly distributed, and any differences in how many craters are seen in one area versus another can generally be tied to one surface being older than another. On Mars, flowing water carved the ancient surface and craters can help tell us when that water dried up. On Mercury, a more heavily cratered world, significant impacts are layered, one atop another. This study will work to disentangle these features and determine their ages.

Crater mapping can only be done by people. “Despite over 50 years in computer vision development, the human brain is still better at identifying craters than computers!” says Robbins. “Citizen science allows us to use the power of crowds to analyze more data than otherwise possible.” 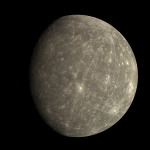 Mercury Mappers 2.0 investigates impact craters and Mercury’s relative stratigraphy – the relative timeline of when one layer of the landscape formed compared to another. This study has 2 parts: a feature survey, and crater comparison. The survey component is being done by team scientists to trace large-scale features on the planet and figure out what happened when, much like a child’s game of “pick up sticks” where you have to figure out how the sticks are overlaid on each other. The crater comparison component – the public’s part – will identify and measure craters to determine the ages of features and how those ages compare with the results from the survey component. This work looks to explore the entire surface of Mercury, but we are beginning its study by looking at a region north of the mid-latitude crater Hodgekins, in the Hokusai region of Mercury.

“The inner-most planet to the sun may look dead and void, but it has had a surprisingly rich and diverse history,” says Robbins. “Figuring out when different events happened is extremely important for understanding its overall history, things like how much heat it had, when volcanoes flooded parts of its surface, and when large craters were formed.” 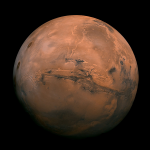 Mars Mappers 2.0 follows the water on Mars, and it invites the public to help determine when different valley networks formed. While Mars is currently a desert world, it had a wet past with enough surface water to create stream valley networks. By identifying and measuring craters in the vicinity of these networks, it’s possible to study the timing and formation of these valleys. The first data citizen scientists will encounter is of the Ma’adim Vallis, one of the largest valleys on Mars. Spanning 700 km, this valley is up to 20 km wide and 2 km deep – wider, deeper, and longer than the Grand Canyon on Earth.

According to Rachael Hoover, a scientist working on Mars Mappers, “A more precise age of valley networks will provide insight regarding the time in which water was present on Mars.”

Additional new features
In addition to refreshing these Mappers projects, CosmoQuest is also releasing a variety of new features, including new galleries, search tools, and ways for you to explore and connect with other CosmoQuest community members and earn badges for your efforts. This includes an expanded suite of real-time ways to interact with project collaborators during online office hours.

“With CosmoQuest, we work to make our community members true collaborators. Just like I would do with a student or peer, I set aside time to be present for our community; to answer questions, and to listen to ideas,” says project PI Gay. “Using online streaming services, we can have face-to-face conversations while physically separated by continents. This ability to communicate in real-time strengths the community and learning we largely do asynchronously.”

These efforts are supported by NASA under cooperative agreement award number
NNX17AD20A. Any opinions, findings, and conclusions or recommendations expressed are
those of this project and do not necessarily reflect the views of the National Aeronautics and Space Administration (NASA). Mars Mappers and Mercury Mappers were produced through a collaboration of the Astronomical Society of the Pacific, the Planetary Science Institute, Southern Illinois University Edwardsville, and Southwest Research Institute. Images used are publicly available from the NASA MESSENGER and Mars Reconnaissance Orbiter missions.

The Astronomical Society of the Pacific, established in 1889, is a 501(c)3 nonprofit organization whose mission is to use astronomy to increase the understanding and appreciation of science and to advance science and science literacy. The ASP connects scientists, educators, amateur astronomers and the public together to learn about astronomical research, improve astronomy education, and share resources that engage learners of all kinds in the excitement and adventure of scientific discovery. In addition to CosmoQuest, current ASP programs and initiatives support college faculty, K-12 science teachers, amateur astronomy