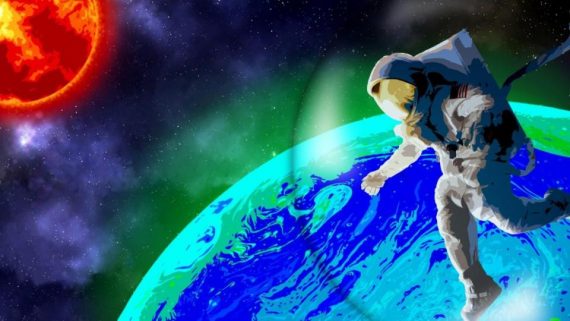 One of the hottest new fields in science is Astrobiology, and core to this field is research into all the ways life can protect itself from harsh realities while make itself known to distant observers.

That sounds complex, and it is complex, but a new paper in the MNRAS, titled “Biofluorescent Worlds II: Biological Fluorescence Induced by Dtellar UV Flares, a New Temporal Biosignature,” breaks it all down for us by referencing life many of us have seen here on Earth.

One of the most common types of stars is the Red Dwarf, or M-type star. This tiny stars live long, but life in these systems can’t always prosper. This is because young Red Dwarfs give off high energy flares of light that can disrupt many kinds of life as we know it here on Earth.

Some life, however, has found a way to transform this harmful rays into gentle glows. Specifically, ocean corals have learned to absorb the sun’s harmful UV light and transform through bio-fluorescence into blue light. Some of you may seen this light at night from cruise ships… or an episodes of ancient aliens where they often mistake this glow for underwater alien cities. Folks – It’s not aliens. It’s coral giving off light we may someday use to detect aliens on other worlds!

It is just possible, that in the future we will be able to monitor alien solar systems with these Red Dwarf, M-type stars, and when we see flares, quickly switch over to looking for bio-fluorescence. It just might be that just as coral responds to low water levels and high UV index days, alien life may responds to powerful flares.

We already have one potential planet to monitor. The rocky exoworld. Proxima b, orbits an active M-type star in the Alpha Centauri system. When those of you in the Southern hemisphere look at alpha Cen., you just might be looking at life, and now… we know how to see if that life is shining a light toward us. 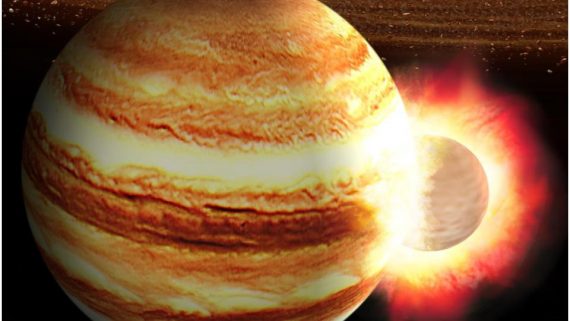 Today’s stories take an unexpected turn toward violence. From flaring Red Dwarfs, we turn toward planetary collisions that just might have happened in our own solar system.

Planetary scientists studying data from the Juno mission have discovered that this gas giant has a fluffy core. It had long been thought that the processes that lead to worlds like Jupiter and Saturn started with rocky cores that were extremely dense. Trying to figure out how to explain what we’re actually seeing has been a great puzzle, and it the solution appears to violence.

In an international study lead by Shang-Fei Liu, new models show that a collision between a young Jupiter and a smaller, but not exactly small proto-planet would disrupt the core, and cause it to settle back into a lower density than it had originally. Models of the early solar system show that there was at least a 40% chance that Jupiter could have swallowed a planetary embryo within the first few million years of our solar system, and Juno’s data seems to indicate we – or rather Jupiter – experienced that possible collision.

To match what is seen, they found that the collision would have needed to be completely head on, core hitting core and not some crazy bank shot or glancing blow. It also requires a 10 earth-mass object to have been part of this epoch crash. Imagine, we could have had another massive world, bit instead, we simply got a fluffy cored Jupiter. 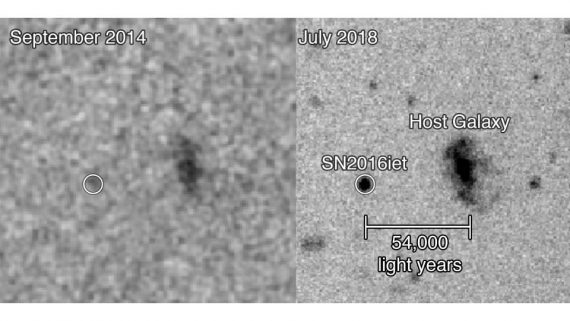 Back in 2916, not long after it’s launch. The Gia satellite first noticed the supernova SN2016iet, and in the 3 years since, it has continued to monitor this system, looking in search of whatever stellar remnant might remain.

I told you today was a day of violent stories.

Over the more than 800 days that astronomers have been looking, they have seen not a photon from a stellar remnant.

And that isn’t the only thing that has astronomers scratching their heads – this supernova is only revealing weak hydrogen gas emission. The position of the explosion indicated that the progenitor was isolated and there wasn’t a lot of other star formation taking place. In fact it was located 54,000 light years from its host galaxy

This is an unusual environment for a massive star, and this hints at SN2016iet being the explosion of a modern day star that formed out of materials not too different from the stuff of the first stars in our universe – a cloud of primordial gas still capable of creating truly massive stars. Observations from the Gemini observatory indicate that the original star may have been 200 times the size of our sun.

It’s isolated location makes it easy to study, and it is certain that astronomers will be observing this remnant for years to come.