As we explore out in the Citizen Science and MakerFaire communities, we often meet up with amazing people doing awesome projects. HotPopRobot is one of those amazing groups, so here are some of the truly awesome things this maker family have created!

From their site:
“HotPopRobot is a maker-family enterprise co-founded in 2014 by Artash, Arushi, Rati and Vikas Nath, to bring discussions on Science, Space exploration, and Technology in our everyday conversation. It encourages families and kids to become creators (and not consumers), by undertaking projects on space, robotics, coding and science. 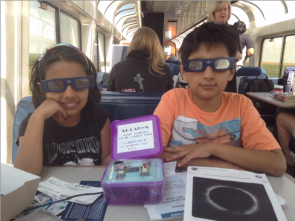 We started this enterprise after winning the NASA Space Apps Toronto 2014 Award for our Mars Rover : CuriousBot and ending up in top 5 NASA Space Apps Winners (People’s Choice) globally! We ended up winning the Challenge again in 2017 as well as the Canadian Space Agency’s Space App Challenge 2017.

It fired our imagination. It is only when we set our vision and goals ambitious in science and space exploration that can we answer the question: Are we the only one out there in the Universe?

For the moment, the answer lies in opportunities we can create for the next generation to become excited about science and space exploration!

Projects that HotPopRobot have recently featured include: 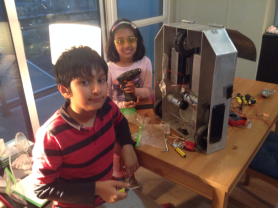 Here’s a cool video of HotPopRobot doing a project was inspired by the family’s visit to the Kennedy Space Centre’s Apollo 11 / Saturn V building in 2015 where they saw the Control Room for the launch along with the giant Sequence Panel, VAB, Launch Pad and the Saturn V rocket itself.:

If you’re looking for great project ideas or more info on being a maker, check out the HotPopRobot website, or email Vikas at vikas.nath@gmail.com / www.VikasNath.org