Here is a list of some of the things that can happen to a rock that is subject to an impact event. The rock might: vaporize, melt completely or partially, be shattered into pieces or even into dust, or be shocked by high pressures. These processes all produce new types of rocks. These new types can also mingle during an impact event, creating complicated mixtures. Let’s take a look at a few of these different types of impact products. Note the images below are from impact rock kits developed by CosmoQuest’s partner, the Planetary Science Institute (PSI). PSI’s rock kits are available for temporary loan to qualifying educators. Learn more here: http://www.psi.edu/epo/rockkits 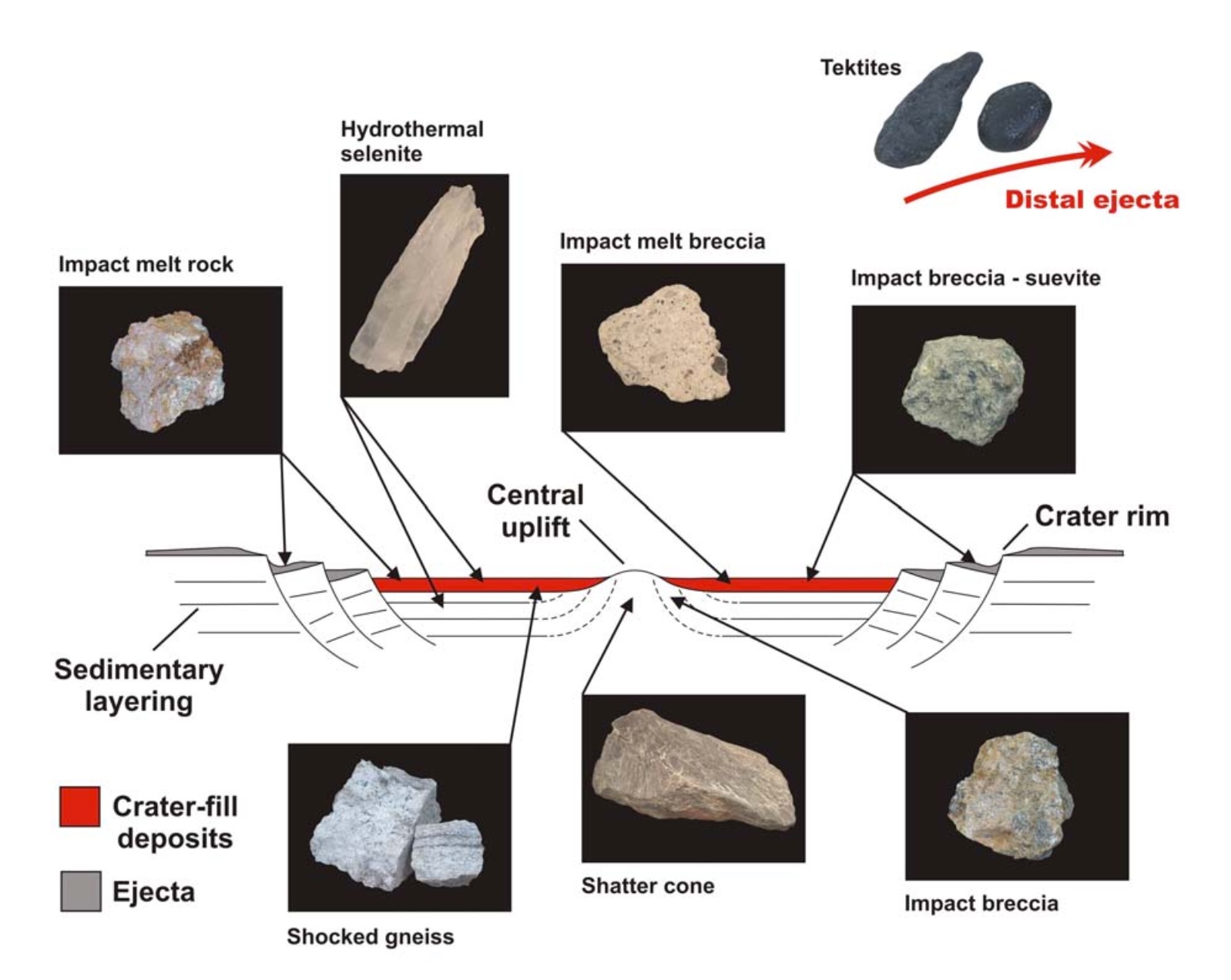 This illustration shows a side view of an impact crater, and several different kinds of impact rocks. These rocks can generally be found in the locations around and in a crater as indicated by the arrows. Credit PSI Impact Rock Kits http://www.psi.edu/epo/rockkits

The most dramatic thing that can happen to the target rock is for it to be vaporized. When an impact event happens, a plume of vapor is created that expands up and out away from the rapidly forming crater.

Tektites: In addition to the vapor plume, tiny blebs of melted material can be ejected far away from the impact site. On the Earth, such blobs of material take on aerodynamic shapes as they move through our atmosphere and eventually solidify. These cooled droplets are called tektites. 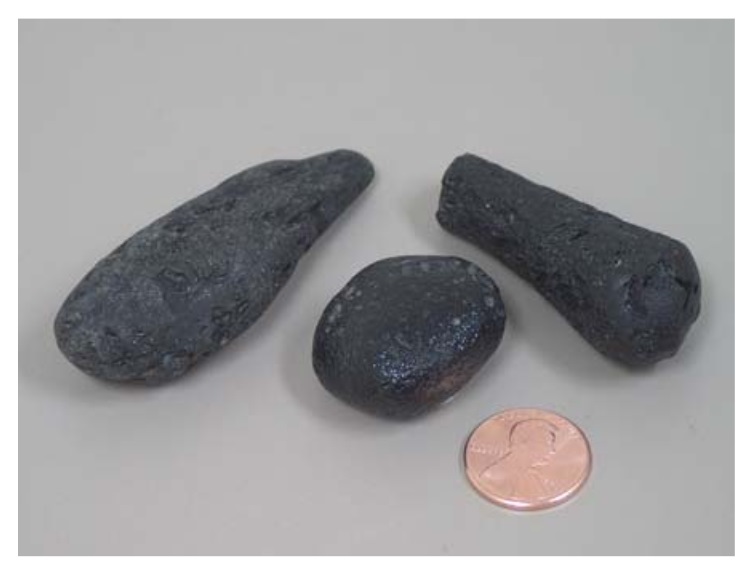 This image shows a few tektites, illustrating the elongated and/or aerodynamic shapes that the blobs take on as they fly through the air. Credit PSI Impact Rock Kits http://www.psi.edu/epo/rockkits 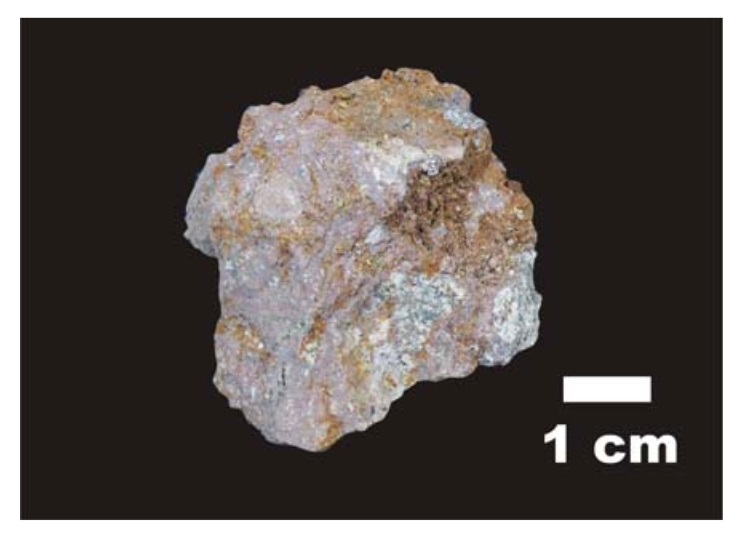 Shocked Gneiss: For example, at the Haughton Impact Structure on Earth, some target rocks have been changed from dark and dense to light and porous (filled with tiny, empty spaces). The original target rock was a “Gneiss,” a kind of dark, dense metamorphic rock. But after impact, this rock was changed so that some of the pieces actually float in water. 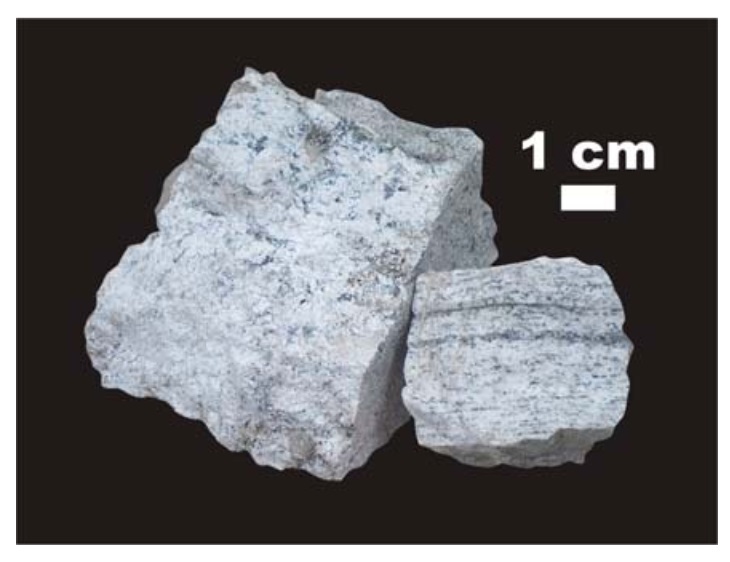 This light-colored rock was once dark and dense. High pressures and even some vaporization of interior minerals created this strange, low-density rock. Credit PSI Impact Rock Kits http://www.psi.edu/epo/rockkits

Shatter Cones: High pressures can also deform rocks, creating distinctive structures. Shatter cones are a kind of fan-shaped structure inside of rocks that have been altered by very high pressures. Only impacts or explosions can create these features. How they are created isn’t entirely understood. 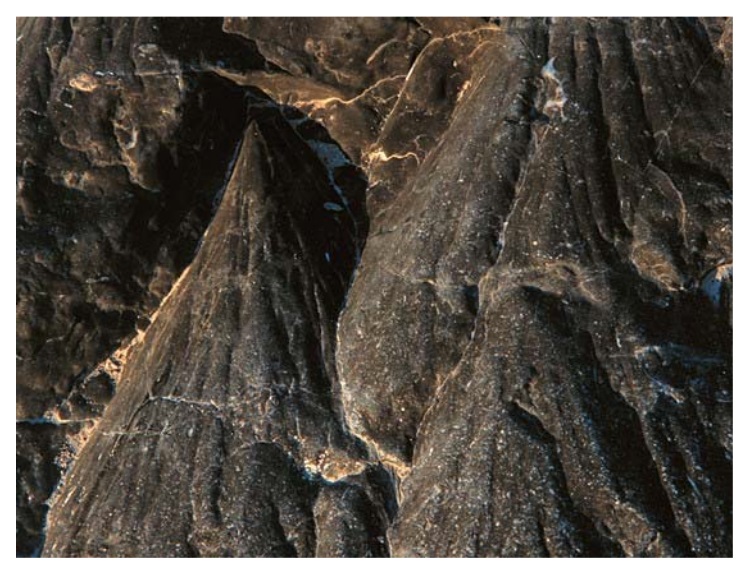 Note the interesting fan or cone shapes inside this rock. These features are unique to powerful explosion events like impacts. Credit PSI Impact Rock Kits http://www.psi.edu/epo/rockkits

Some of the most complicated rocks that get produced by an impact event are the “Breccias.” These are rocks that are made out of broken bits of a variety of materials all mixed together. Breccias consist of fragments of rock pieces that are embedded in fine-grained material called a “matrix.” Impact Breccias can have cooled impact melt mixed into them, and if they do, they are called “Impact Melt Breccias.” 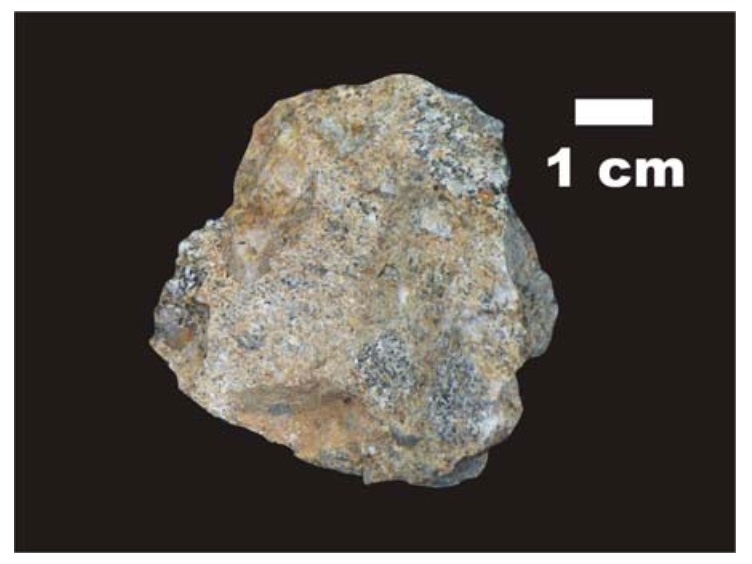 This rock is an Impact Breccia (no melt). Note that it has chunks of rock fragments mixed in with a finer-grained background material. Credit PSI Impact Rock Kits http://www.psi.edu/epo/rockkits

Your Own Crater Tour!

If you want your own up-close tour of an impact crater, visit The Explorer’s Guide to Impact Craters – Virtual Tour site.