In previous posts we’ve discussed how the very smallest craters have “simple” shapes, and that the somewhat larger craters have “complex” shapes. You may have been wondering why that is, and what we mean by “larger” anyway? How large is large? Well, that turns out to be dependent on the planet where the crater is made. 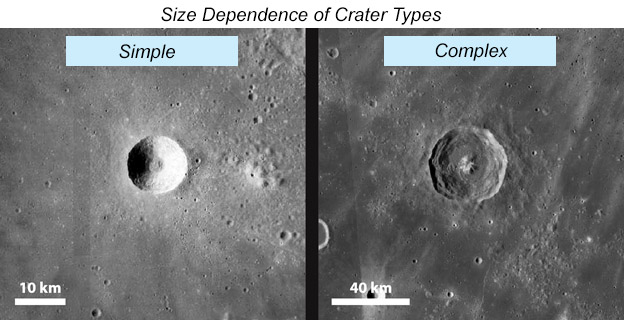 Note that the complex crater is much larger. It has a classic central peak, flat floor, and terraces along the inside rim. (Credit: Trang, D. (August, 2016) What Made the Doughnuts Inside Lunar Concentric Craters? PSRD, http://www.psrd.hawaii.edu/Aug16/Lunar-concentric-craters.html.)

As we measure simple craters on the Moon, for example, we see them getting bigger and bigger until we get to a diameter of about 16 kilometers. Any craters larger that that are complex craters. On Mars we see something different. There the transition is at about 8 kilometers where smaller craters are simple, and larger craters are complex. Why is this?

If we make a plot of this “transition diameter” versus gravity, we see something interesting. 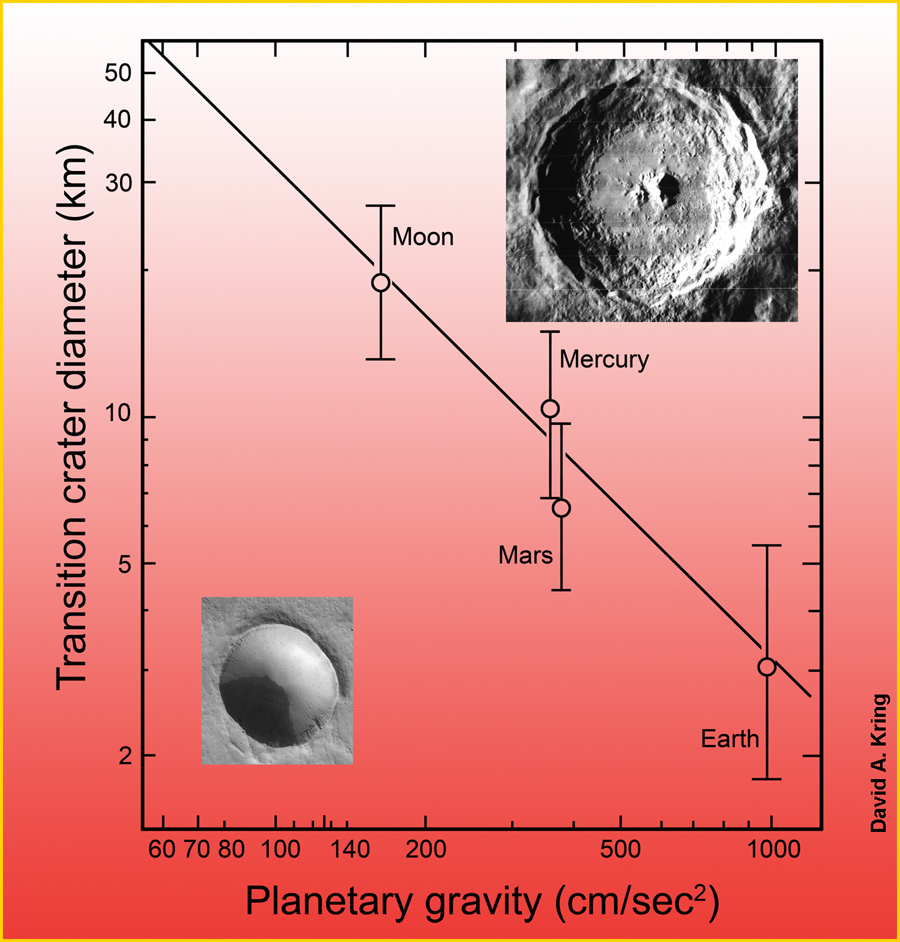 In this plot we see the transition diameter of four worlds plotted against the gravity at the surface of each of those worlds (The Moon, Mercury, Earth, and Mars.). (From LPI/USRA, at https://www.lpi.usra.edu/exploration/education/hsResearch/crateringLab/lab/part1/background/, Credit: Illustration from an educational poster, Geological Effects of Impact Cratering, David A. Kring, NASA Univ. of Arizona Space Imagery Center, 2006.)

The bedrock on the surfaces of each these bodies is under constant “stress.” There are forces trying to break or crack the bedrock, and these forces are resisted by the strength of the rock itself. These forces include gravity. During an impact event – a higher gravity means a more dynamic impact process for the creation of the final impact crater.

Keep watch as you are measuring craters … can you find simple and complex craters near the transition diameter for that world? Is it what you were expecting from the plot above? Did the scientists get it right?